As soon as we entered the 50-foot long aviary, all the ravens made a quick beeline to the far end. One of them, who still has trouble with her foot, hopped along to catch up with the others.

Flying to the far end was a terrific sign. It meant that all 10 of the young ravens are wild enough to be released. Wild birds in rehabilitation need to retain their fear of humans in order to be able to go back to the wild.

Getting to this point wasn’t easy. It took quite a lot of work over many weeks on the part of the Best Friends team to restore the ravens’ wild instincts. Unfortunately, they were rescued by a very kind person who simply did not know that ravens need to remain wild. 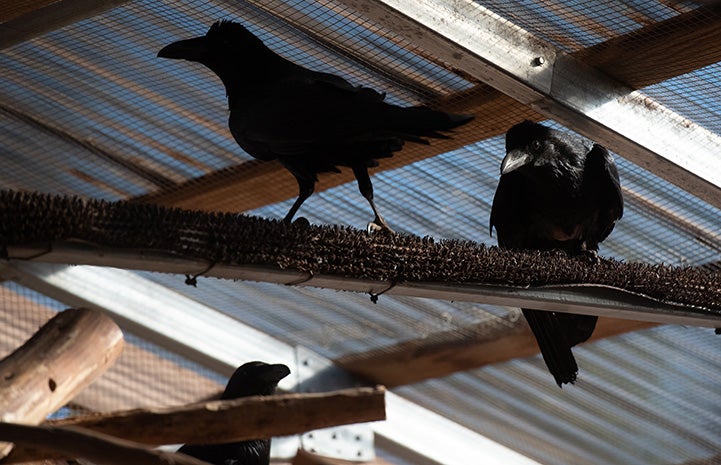 A truck driver determined to help

One of the ravens, whose wing is still on the mend, is called Rav. She and one of her siblings were rescued by a truck driver after falling out of the nest. The others, sadly, did not survive.

Not knowing that his actions were illegal but acting only out of kindness, he kept the two young ravens in his house and in his truck for several weeks. This included driving them across state lines to find a veterinarian in Las Vegas who might be able to treat Rav’s injured wing.

The veterinarian, who did not have experience with wildlife, naturally wasn’t used to treating ravens. And since he wasn’t a wildlife rehabilitator, he couldn’t legally keep the ravens. So, the truck driver drove them back into Utah where, after asking around a bit, he found Best Friends Animal Sanctuary and transported the ravens to Wild Friends, the sanctuary’s wildlife rehabilitation center.

At last, the rescuer found someone who knew how to care for the nestling ravens. Corinne Blossfeld, Best Friends licensed wildlife rehabilitator, is fully qualified to rehabilitate ravens and other wildlife. The truck driver was sad to say goodbye to his two young charges, but happy that they would be well cared for and have a good chance for release back to the wild.

Although her sibling was very weak and did not survive, Rav herself is doing well. Having received excellent medical care from the Best Friends veterinarians, her wing is getting much better. She will stay at Best Friends over the winter instead of being released in the fall with the others. That way there will be extra time for her wing to regain full flying strength. She’ll be spending the winter months with the other raven who, because of the foot injury, is also not yet ready for release. 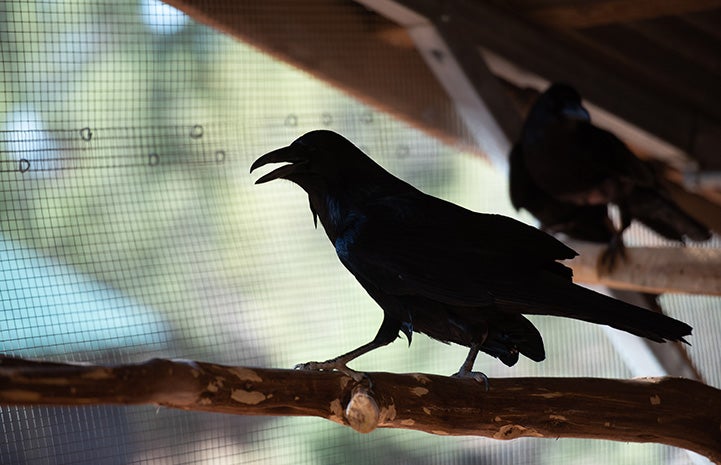 One of the ravens, called Caw, presented quite a challenge to Corinne and the caregivers. Usually, wild birds and animals in rehabilitation are not given names because it is important that they remain wild and not be treated like pets. In some cases though, exceptions are made. Although the birds are never addressed by their names, with 10 ravens together, being able to refer to them by name can certainly come in handy.

When Caw first arrived at Wild Friends as a fledgling, instead of flying away from humans (as a wild raven should), she did just the opposite. She flew toward her human caregivers and hid behind their legs to keep the other ravens at bay.

Unfortunately, the person who rescued her did not understand that she needed to remain wild. Behaving in an overly friendly way toward humans would place her in grave danger. Some humans might even think she was attacking them, while other ravens might think she was just an altogether odd bird. Appearing to be different could mean that she wouldn’t be accepted in the normal raven social order.

Over a number of weeks and with great perseverance, Corinne, along with subpermittee and caregiver Lauren Ross, made a point of completely ignoring and never rewarding Caw’s friendly, but inappropriate behavior. All their perseverance paid off and now Caw, along with the other ravens, flies away instantly to the far end of the aviary, showing no inclination at all to be friendly with humans. With this success, she’ll soon be released, fully able to live a happy life in the wild. 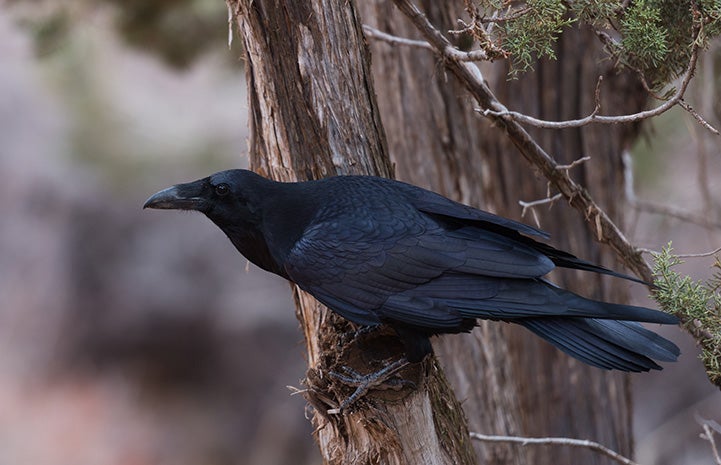 Located in every country around the globe, ravens are highly intelligent, very charismatic birds known in myth and legend over thousands of years. Munnin, one of the 10 ravens at Wild Friends this year, was named by her rescuer after one of the two raven companions of the Norse god, Odin. She was the raven with injured foot who stayed on the ground when we first entered the raven aviary.

Though still having foot problems, she is a lot stronger now and has normal mobility. She just needs a bit more extra time to heal completely; so, Munnin, along with Rav, will stay behind until next spring, while the others are released later this fall. 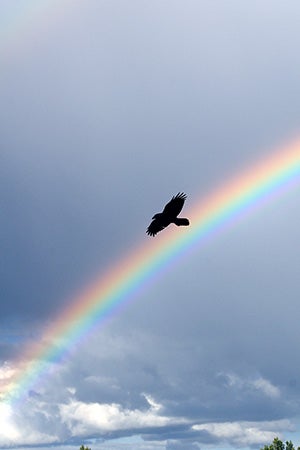 Looking forward to freedom in the wild

Eight of the ravens, now healthy and wild, will be released in the coming weeks. Thanks to the expert care they received at Wild Friends, they are wild again and fully able to live happy, healthy normal lives out in the world of nature.

They almost didn’t get this chance. Life in captivity with humans is a poor substitute for the immense majesty and beauty of life lived free in the wild.