An adopter talks about life with adopted dog Hayley, the perfectly polite queen of the dog park.
By Virginia Link

Every pet has a story. Every one of them has lovable quirks, cheeky nuances, perfectly perfect imperfections. At Best Friends, there’s nothing we adore more than adopters sharing tales about how life panned out for the countless cherished animals who once called the Sanctuary home.

Here’s one happily-ever-after story that we just couldn’t put down. So, naturally, we wanted to share it with you. Because loving these animals and recognizing that every single one is an individual worthy of a full and wonderful life is truly what unites us.

The queen of the dog park 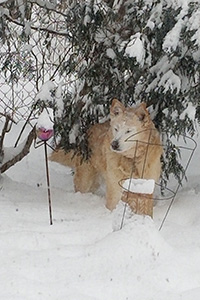 There’s a golden-colored fuzzy dog curled up next to me, sleeping peacefully. She’s already had her two daily trips to the off-leash dog park, where she got to not only socialize with other canines – old and young – but mooch treats off their human companions. The sleep is well earned.

What can I tell you about the best dog in the world? While it feels impossible to put into words what a gift she is, I owe it to her to try. She’s over 13 years old now, but still gives the pups a run for their money. She’s alpha enough, and smart enough, to make them do most of the work, though. A play bow and a “woof woof” and off they go, running circles around her, hoping for a game of chase. She just ambles on after a bit. Satisfied.

All the puppies adore her, and she tolerates their submissive adoration. They run up to her, some of them throwing themselves on their backs beneath her or just effusively licking her lips. They treat her like a queen, which of course she is.

Hayley was one-half of a “twin set” of golden retriever and husky mix puppies rescued from a puppy mill in about 2006. She and her brother, Mills, ended up at Best Friends Animal Sanctuary in Utah, after a stop in a shelter in Tennessee. Both had heartworm when they arrived at Best Friends. I am so grateful that Best Friends had the resources to treat them.

[5 dogs who changed their adopters’ lives]

I was visiting Best Friends in 2009, and walked Mills one day, as part of my volunteer stint. On the last night, after having dinner in town, we went to pick up the dog who would be our overnight guest, and I saw a dog who I thought was Mills. But no, it was Hayley. Same sweet personality, same golden-yellow fluff ball.

She came back to our cottage with us that night. Do you want to guess how long it took for her to make her way into our hearts? About five minutes. Yup. She got us. 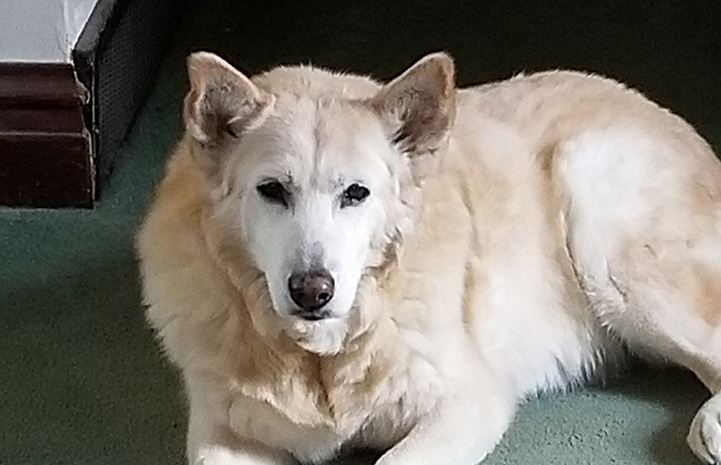 Squirrel TV in the back yard

Hayley has the fuzziest ears, and they’re big. I call them satellite dishes, because they clearly have great reception. If you’ve ever seen huskies hunting rodents in the snow, you’ll recognize the head tilting to the ground as they listen for the telltale sounds the mice are making beneath the snow cover. At her age, she’s experiencing some hearing loss, but her eyes are still good, and that nose remains in prime condition.

She has a fenced-in yard at home, which faces into the woods. She lies outside for long stretches, watching the squirrels and chipmunks brave enough to come to the seed feast I put out for the birds. She’s too slow to catch them, but she enjoys watching this version of Squirrel TV, sometimes hiding behind the cloth I hang in the porch doorway to keep the birds from flying in while the door is open. She knows how to peer out under the cloth, and just when to launch. It’s lucky that the squirrels have a cherry tree to scurry up, and that they are just too fast for her.

Hayley is both my personal trainer and my constant entertainer. In Wisconsin, with its six-month-long winters, she gets me out into the elements and it makes the season more tolerable. Even if we’re the only ones in the park, it is OK. There are the birds, after all: sandhill cranes, bluebirds, robins, field sparrows, red-wing blackbirds. Without Hayley, I wouldn’t get out much. But we almost always have human and canine company, and while I walk and talk with park companions, Hayley plays with her friends. 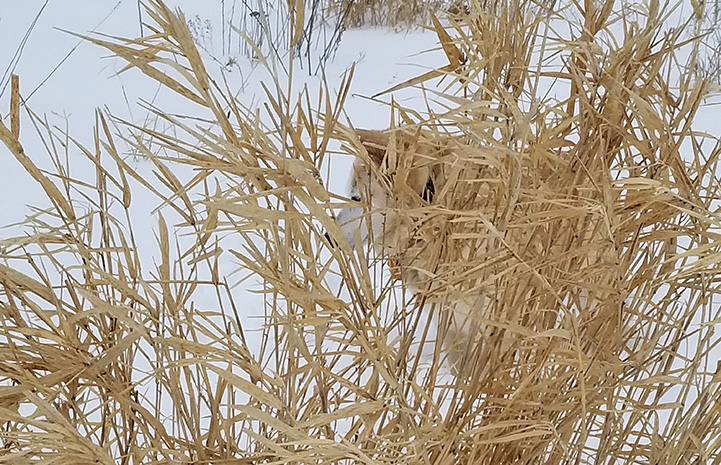 A polite and precious canine companion

The intention was never to bring another dog home from the time spent at Best Friends. We already had two dogs back in Madison. Add another to the pack? I only have two hands, one for each dog. But Hayley was so sweet. And so well trained. And such a good cuddler. We ended up filling out an adoption application. The next thing we knew, we were driving to O’Hare airport to pick up our new pack member.

Hayley knew the most critical commands when she came to us, such as “leave it” and the other basics: “sit,” “stay,” “off” and “come.” By accident, I discovered that she would come when I made a smooching sound, like a kiss. I don’t know where she learned it, but it came in handy for getting her to come in at night, when she really would rather be patrolling the fenced-in yard.

I have never had a dog as well behaved as Hayley. She never counter-surfs. She waits patiently for her daily walks, unless I dawdle too long. Then she launches into a “roo roo” barking show, tossing one of her toys or chews in the air, making me laugh and put down whatever is distracting me. I tell her she can have whatever she wants, especially when she makes me laugh.

I’ve taken her to nursing homes for visits over the years, and she is a champ every time. She loves the scritches from her adoring fan base, and it’s a great pleasure to see people’s faces light up when she visits. She walks perfectly on leash. When visiting senior facilities – or even friends – she’s content to lie down under a table. Having had dogs all my adult life, I just can’t imagine living in a place where I couldn’t have one or at least have one visit me regularly. Hayley’s visits fill that void for many.

I am eternally grateful for this precious canine companion, and grateful to Best Friends for giving her a home until she came into my life. She will be a hard act to follow. 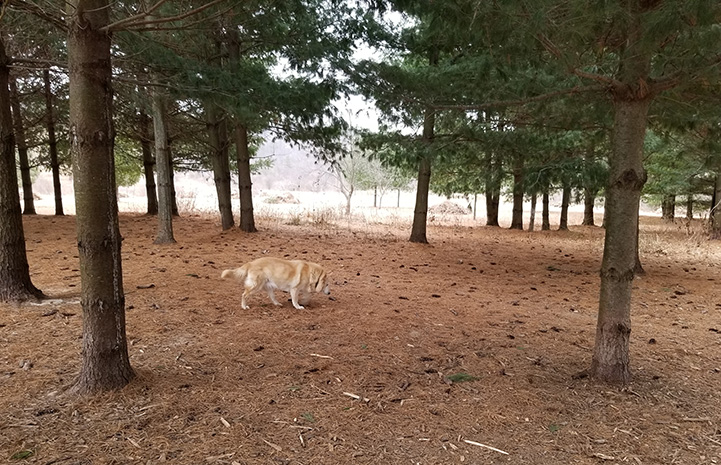 Create your own adoption story

There are pets near you, just waiting to go home and start their own story with you.