Image
Azzurra had never lived in a home and was afraid of people, but her new family is helping to change her world.
By Sarah Thornton

There’s something magical about the moment you see shy, anxious pets finally relax. Watching their muscles loosen up as they let their guards down — even if it’s just for a second — feels like you can finally breathe, too. Every little step bringing them closer to you is an accomplishment all on its own. The bond formed while you help them feel safe and build up their confidence becomes extra special.

That’s what Ashley Hedges was searching for when she went looking for a dog to adopt. While pet sitting and volunteering, she had seen how dogs she’d worked with — with some extra time and patience — came out of their shells, and she wanted to find a dog she could really help. She met Azzurra, a young, scared dog who’d never before lived in a home and didn’t know what to think of people. 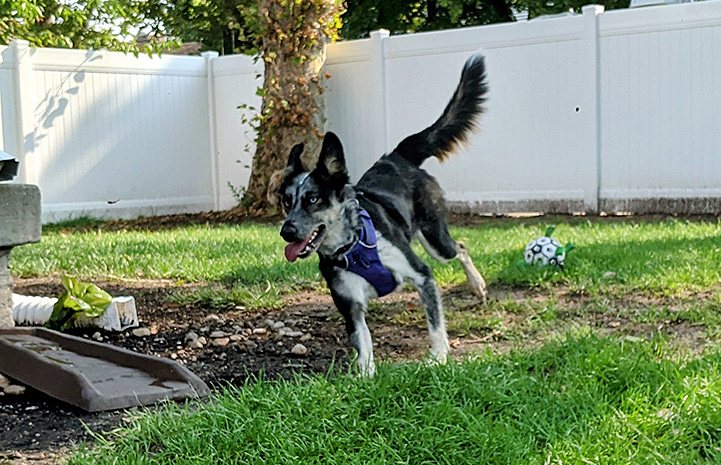 Big changes for a scared dog

Tragically, when she was a puppy, Azzurra lived outside in a small pen with several other dogs and very little human interaction. She was being picked on by the bigger, older dogs, so the people who had them decided to take her and another bullied dog to a nearby shelter.

Since she had never learned how to walk on a leash, Azzurra was brought into the shelter wrapped in a towel and trying to escape by wriggling out of their hands. She was terrified of so many new close-up human faces and the many unfamiliar smells and sounds that surrounded her.

From there, Azzurra was brought to Best Friends Animal Sanctuary for help and a fresh start. One of the best ways to build up a shy dog’s confidence around people is to enlist the help of a buddy, so Dogtown caregivers quickly got to work identifying more confident dogs and setting up introductions. With a new canine companion to watch her back and patient caregivers to show her she was still safe even with people around, Azzurra’s defenses slowly started coming down.

She was still scared, shy and on alert more often than not. But the world wasn’t ending, and with time and care, it seemed that she would come around and open up. And as it turned out, she wouldn’t have to wait long to find someone looking for a pup like her, who needed just a little extra TLC. 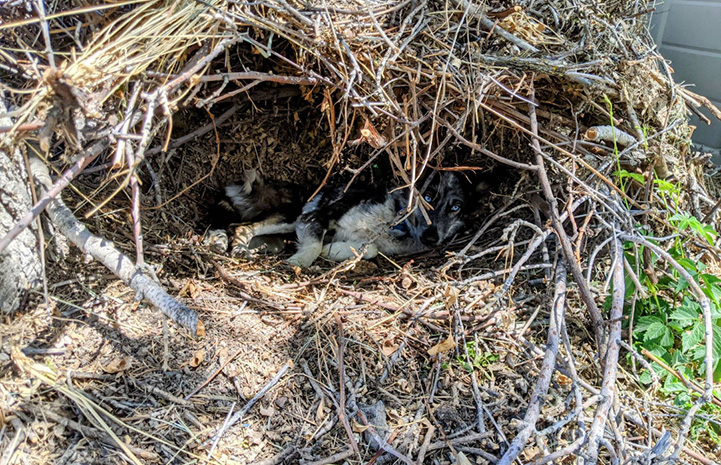 Adopting a dog who needs you

Ashley Hedges, a volunteer who walked dogs for Best Friends in Utah (Salt Lake City), found it was a good way to decompress from her stressful job at the hospital. She enjoyed every moment spent at the other end of a leash from her doggy friends, and she liked seeing them come out of their shells to show off more and more of their personalities.

When Ashley finally had the opportunity to bring a dog into her own life, she knew just what she wanted —  a dog who might need a little extra effort and might have a hard time finding a family. So, she started paying attention to posts about dogs at the Sanctuary (looking for just the right pup) and remembers the first time she saw Azzurra, in a photo taken from distance through a fence: “You couldn’t see her very well. She just …  seemed like she was shy and needed a lot of work, which was what I was looking for.”

With that, Azzurra had a home. Ashley drove five hours to the Sanctuary to meet the blue-eyed dog and bring her home. At Ashley’s house, it took Azzurra a few more hours to emerge from her traveling kennel and take her first few, hesitant steps.

At first, Azzurra made it clear that she was more comfortable out in the yard than in the house. So Ashley gave her all the space and time she needed to get used to her new surroundings. She spent time with her in the back yard just sharing the space with the nervous dog, without approaching or expecting any interaction.

“And then, after a couple of weeks of being here, that’s when we saw her start to at least sit down during the day and kind of relax,” says Ashley. “She realized the yard was quiet and she was safe. She was OK.” 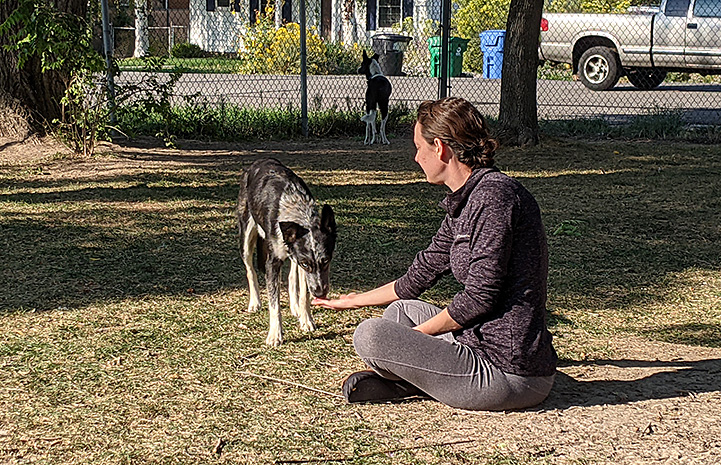 That was the cue to really start working with Azzurra. Ashley spent an hour or so each day waiting for the dog to settle down, before approaching and offering treats. “It took close to three weeks, and then she just started adapting,” Ashley says. “She was willing to eat food out of my hands. That was the first step and then she started making progress.”

Showing improvement every day, Azzurra relaxed more and more as she slowly gained confidence in her home and around her family. She enjoyed the feel of gentle scratching fingers in her fur, and even started letting Ashley pet her. She began spending some of her nights indoors in the comfort of her kennel.

At some point, though, Ashley felt she’d taken Azzurra as far as she could on her own. It was time to do the same thing for Azzurra that had previously helped many other shy dogs at the Sanctuary — put her together with a friendly dog buddy. So Ashley contacted Herding Haven, a Best Friends network partner organization, indicating she was looking for a confident dog of similar energy who could help Azzurra push past her remaining hurdles.

That dog turned out to be Petey, an energetic youngster who’d been waiting for a home of his own. As soon as Azzurra met him, it was like someone flipped a switch and everything that had previously been hard for her was suddenly possible. 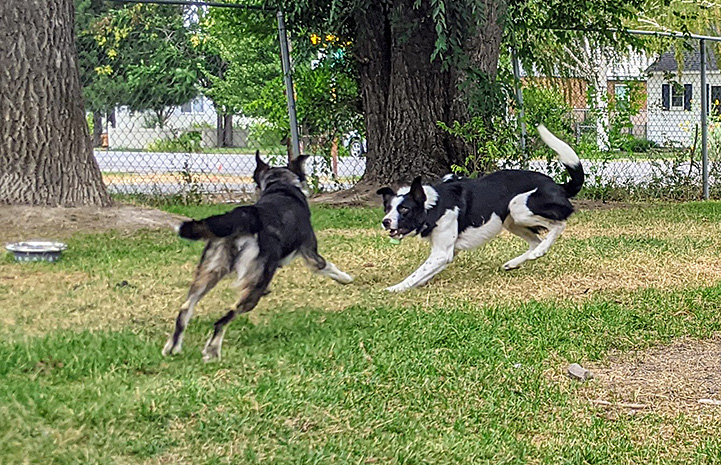 “Within a day of him being here, she sleeps through the night,” Ashley says. “She’s willing to walk in the house on her own, so now she puts herself to bed. She’ll walk up to me to get treats now. It’s just a huge transformation.”

Azzurra and Petey are already inseparable. Anything Petey does, Azzurra wants to do, too. They spend all day playing and chasing each other around the yard, working out their energy until it’s time to stop for a meal or some attention. Azzurra will even roll over to ask for belly rubs.

With Petey as her role model, Azzurra has the incentive to join in on walks. And that’s enabled Ashley to finally get the once-terrified pooch walking comfortably in a harness. At first, walks were confined to the yard, but they graduated to walking all the way to the park. “She had her head and tail up high, like she was so proud she was walking,” says Ashley.

Now that she’s not constantly worried about every little movement, it turns out that Azzurra also absolutely loves toys. “If you toss a ball in the air, she gets really excited about it,” Ashley says. “She doesn’t understand the concept of fetch. She just wants to keep it and chew it once she gets it, but she’ll kind of pounce after it and get really excited. After a while she’ll just stop in the middle of the yard and roll around. She’s so happy.”

The way Azzurra acts now around her people — compared with the past — is like night and day. With the help of Ashley’s quiet, gentle patience and Petey around to help her the rest of the way, Azzurra is finding her own confidence and hitting her stride. She’s coming out of her shell and blossoming in the warmth of all the love that she’s finally able to feel and appreciate.

“She’s a sweetheart,” says Ashley. “I’m really glad we have her. It’s just rewarding to see her grow and her relax. There’s just a moment where they start to get it and they start to flourish. It’s pretty cool to see.” 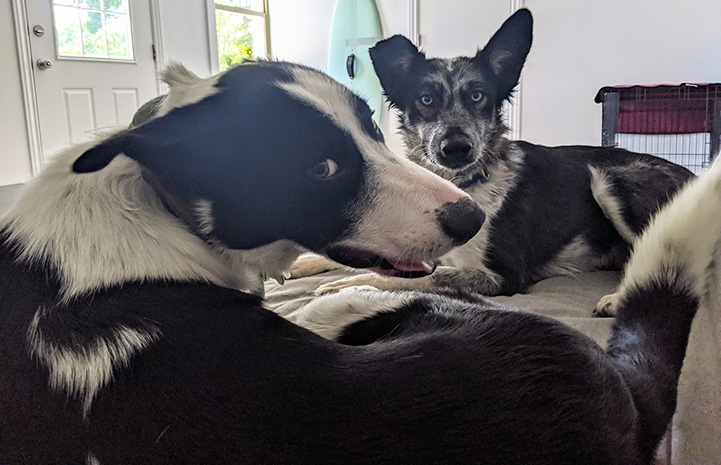 Open your home to a shy dog

You can help shy dogs come out of their shells, too, and they will give you a lifetime of love in return.