A major effort for a stray homeless cat

Image
People come together to help a ‘feral' stray feline who tests positive for the feline immunodeficiency virus.
By Molly Wald

Back in 2012, Mike Poulos and his wife Donna, both seasoned cat rescuers in Texas, saw something that they weren’t used to seeing: a group of cats hanging around their house. One by one, the cats were trapped and fixed, and eventually they all scattered — except for a handsome round-faced tabby, who Mike started calling “Major.”

Major came up on the Poulos porch every night and sat there like a sentinel. He wouldn’t let anyone touch him, but seemed to appreciate the extra kibble and the patio furniture. Thinking that they should just bring him inside to see what would happen, the Pouloses trapped Major a second time and took him to their personal veterinarian.

Not so feral after all

“Be careful, he’s feral,” Mike remembers warning his vet, who then proceeded to pick Major up. Mike and Donna were shocked when they realized that maybe Major wasn’t feral — just very shy.

Part of the vet exam included blood work, which revealed that Major had feline immunodeficiency virus or FIV, an often misunderstood virus. With careful monitoring, cats can live comfortably with FIV for years. The vet recommended that Major be kept separate from the rest of the cats, since one of their current brood had a depressed immune system.

(Studies have shown that as long as two cats don’t fight with each other, an FIV-negative cat can live with an FIV-positive cat.)

Still, the Pouloses remained committed to helping Major find a new home. A spare bedroom became his temporary room, and Mike replaced the solid door with a glass one so that Major could see out. Mike started spending a lot of time keeping Major company. 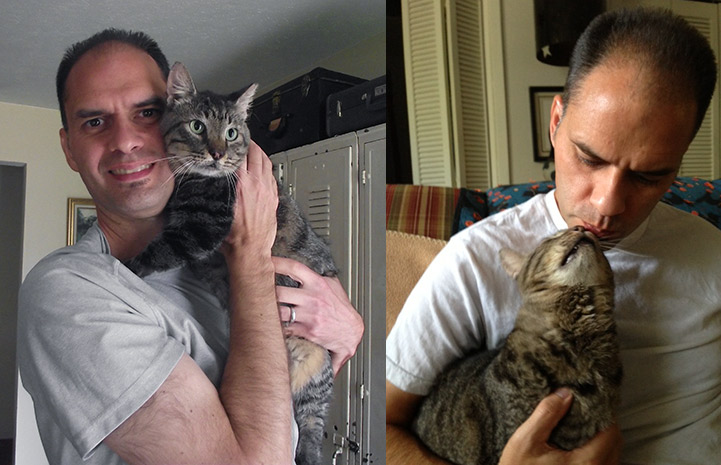 “He opened up to me,” recalls Mike. “I would go spend a couple hours and play guitar with him. On the weekends, I would sleep with him in a cot. I had to hide under the covers because he would just keep licking my head! I would describe him as overly affectionate. I got attached to him, and he was pretty well attached to me.”

Adopt the best cat ever

They sent out every type of publicity on Major that they could think of. Mike, a runner, wore “Adopt Major” T-shirts while competing in marathons. They plastered adoption ads around the neighborhood, made buttons and put Major on their Christmas card. Mike even got Major on television. 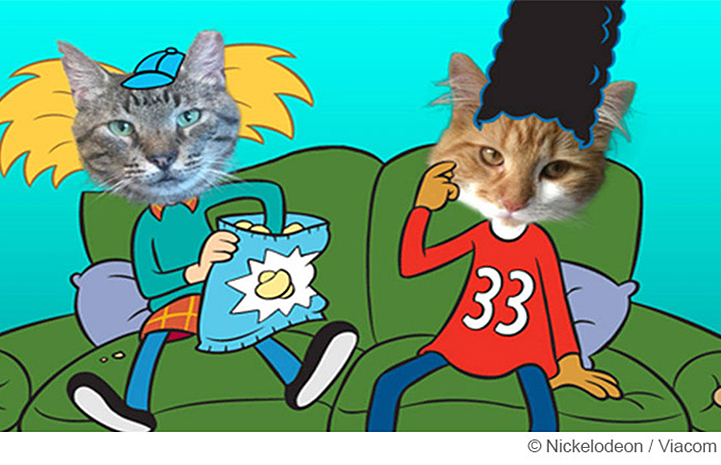 When Nickelodeon was running cat-related promos for a programming block of TV shows from the 90s, Mike tweeted a photo of Major to the network. Long story short: Major appeared on television — his photo digitally inserted into a screen grab from “Hey Arnold.”

Despite all this creative marketing, no one wanted to adopt Major. Plus, every local rescue organization they contacted was full. The Pouloses knew that living in a spare bedroom was not the best permanent solution for Major. But then they got the news that a space had opened up at Best Friends, and soon, Major was on his way to the Sanctuary, where he’d get a fresh start.

It can take a while for a shy kitty to adjust to the busy Sanctuary. So, caregivers gave him space by allowing him to melt into the background — but not forever. Persistent caregivers at Cat World were not about to let Major slide back to his ultra-shy self.

Major soon became one of the favorites of caregiver Kristen Kolar, who started encouraging him to again come out of his shell. (She’s quick to point out that many caregivers have worked extensively to help Major.) 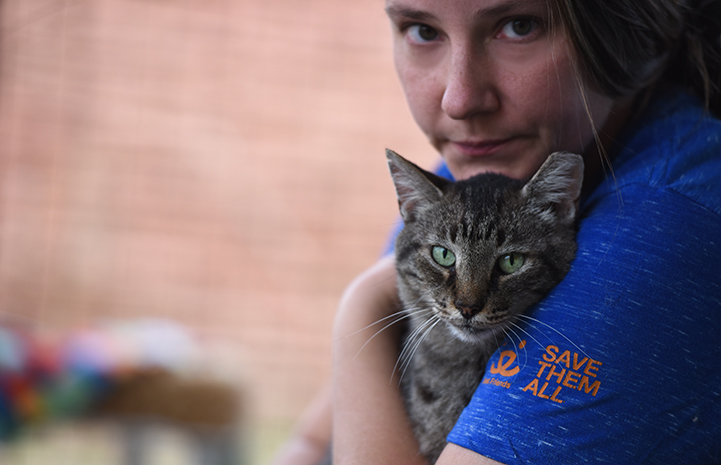 “Well, he’s got those amazing green eyes,” says Kristen. “I also love shy cats! If there’s a cat who is shy, I want to help him. Shy cats have so much to offer. You just have to be willing to put in a little work and have a lot of patience.”

Patience is a key word. Kristen built up trust with Major by first finding out if he could make eye contact. And if so, would he eat treats tossed in his general direction? Would he eat treats from someone’s hand? And while he was eating, could Kristen pet him?

It took a while, but Major began to slowly reveal his true self — the one Mike knew so well in Texas, and the one that Cat World caregivers have come to love so much. 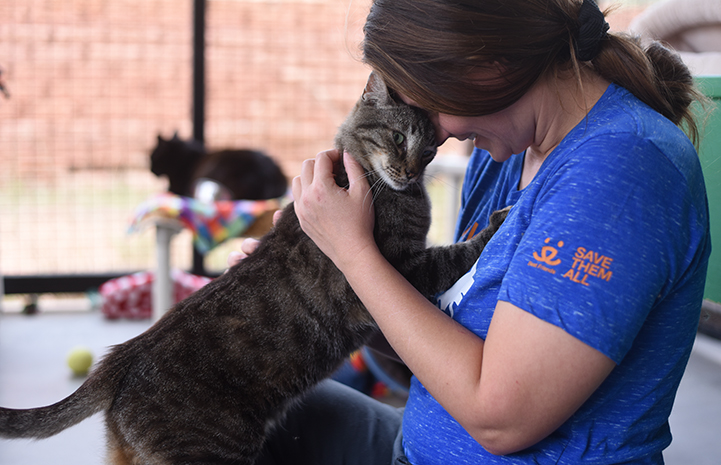 “Major is the sweetest, most snuggly cat you will ever meet,” says Kristen. “He gives great hugs, and he just snuggles into your neck. He is waiting for that great home with someone who wants a snuggle buddy who will be there.”

Kristen has started clicker training with Major, who knows how to “target” a small stuffed toy put anywhere in his room. 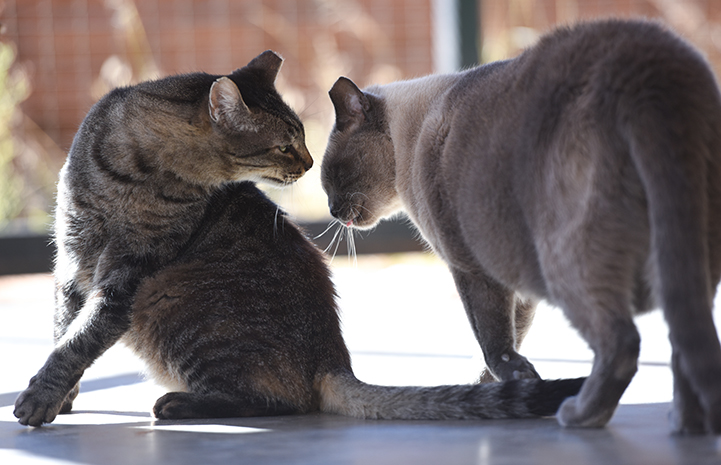 Gentle and loving with other cats, Major would do well in a multiple cat household. 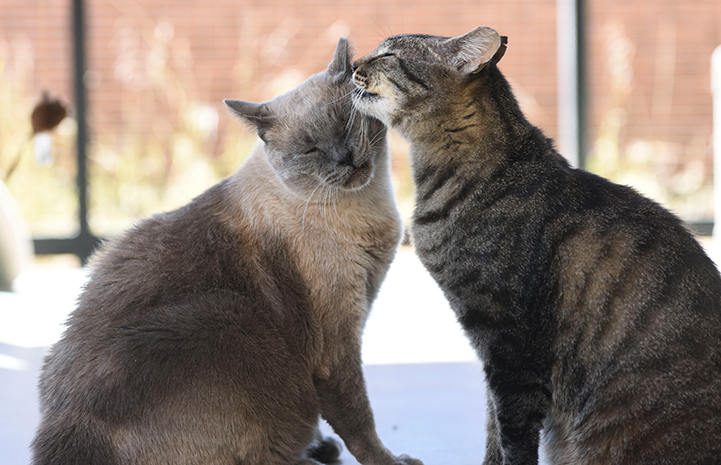 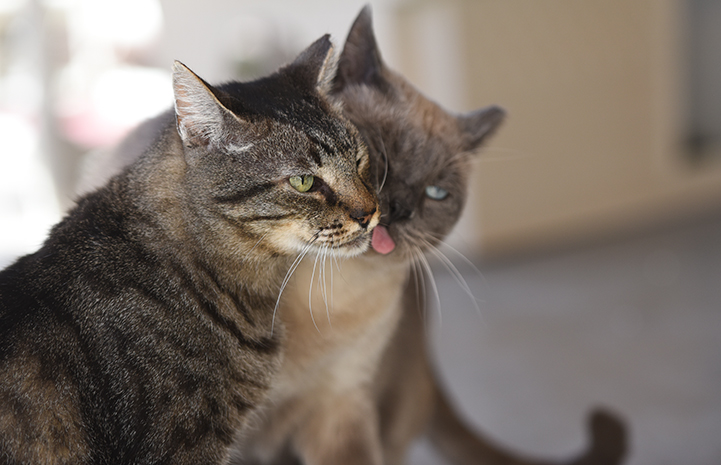 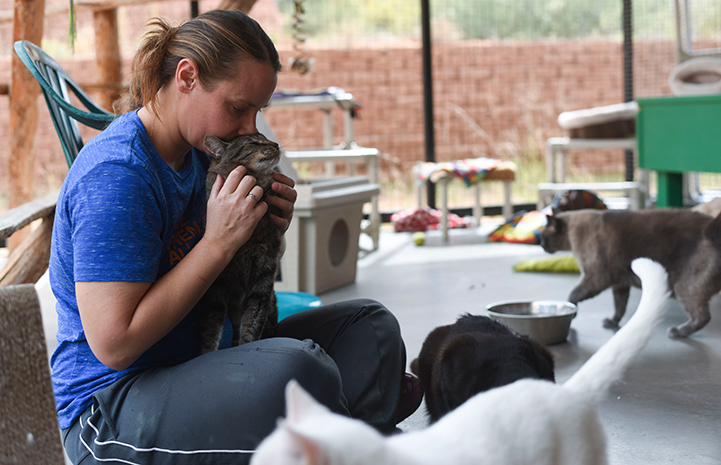 So many people have stepped up to help Major, but now it’s really time for him to go to a loving forever home. All through December, Best Friends is promoting special-needs pets like Major. He can be adopted for free, and that also includes free air transportation to his new home, anywhere in the U.S. or Canada.

Won’t you help Major go home for the holidays?