Meet an underdog cat who inspires

Image
Underdog cat who has the feline immunodeficiency virus (FIV) has a wonderful attitude. He inspires all who come in contact with him.
By Nicole Hamilton

The Best Friends Pet Adoption Center in Atlanta is a busy place. Not only is it one of the city’s top destinations for adopting an awesome cat or dog, but it’s also the hub for Best Friends in Atlanta’s lifesaving work.

You’d think helping to lead the movement to make Atlanta a no-kill city would be serious business. And most of the time it is. But everyone needs to take a break from time to time, and that’s where Calvin the underdog cat comes in. It’s his job to remind everyone to take it easy, and he’s very good at it.

“Whenever I am working hard on a project or focused on work, he jumps up on the desk and collapses across my keyboard,” says Amanda Blair, the center’s senior manager. “He forces me to take a break and focus on all that is good.”

Of course, it isn’t that Calvin isn’t grateful for all the hard work going on at the pet adoption center. If he knew what Amanda was working on, he’d have nothing but mad respect for her and the team. After all, it’s all that hard work that’s helped Calvin get a second chance at a great life.

Helping a cat with FIV find a home

Back before he landed his job as Amanda’s right-hand cat, Calvin lived in a loving home. But when his adopter passed away, he was brought to a Cobb County animal shelter which then contacted Best Friends. Shelter staff knew that since Calvin has the feline immunodeficiency virus (FIV), Best Friends would give him an even better chance of finding a loving home again. At Best Friends, the adoption playing field is level, and Calvin would have the same chance at adoption as the other cats.

When Calvin first showed up at the center, he looked a little disheveled. “He was an almost toothless, mottle-faced lump of love with just enough salt and pepper in his coat to show his wisdom,” says Amanda.

Let’s just say his namesake, the great fashion designer, probably wouldn’t have let him on his kind of catwalk without a little spa time. And really, that’s all Calvin needed: some rest and recuperation, a good brushing and warm bed where he could crash for a few days.

In just a short time, Calvin looked rested, healthy and he also started to feel confident in his new surroundings. Noticing that Calvin had a personality that you can’t ignore, the team decided that he needed to be out and about. He went to live in Amanda’s office, where he’s proven to be both the best and worst assistant she’s ever had.

Included in his salary are belly rubs, unlimited treats, and a nap whenever he’s good and ready (which is often). 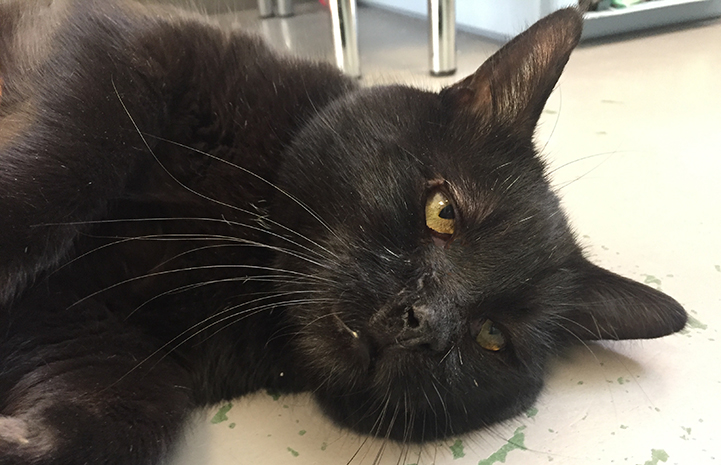 “When he goes to lay down next to you, it's not so much of a graceful descent, but more of a plop,” says Amanda. “Calvin has lots of moxie, along with love and affection for his humans.”

The next step will be for Calvin is to find a permanent home where he can show his love to someone 24/7. Although he has FIV, he is very healthy and can live a long and happy life.

When Calvin does find his family, it will be a sweet moment for Amanda and the rest of the center’s team. But it will be a little bittersweet, too, because they’ll be saying goodbye to a cat who reminds them of why they’re working hard to help save Atlanta’s homeless pets in the first place.

“Sometimes it takes a little longer to find guys like Calvin a home,” says Amanda. “But it makes it so much more worth it when you finally find that special person who wants to give a good life to a special guy like Calvin.”