The Michigan Animal Adoption Network, our No More Homeless Pets Network partner in Pontiac, has been addressing the homeless pets issue in their community for over 15 years. Their approach is straightforward; they literally take to the streets to help people get their animals spayed or neutered and provide further services, such as their pet food assistance program. They go door to door to see what type of help each family may need. 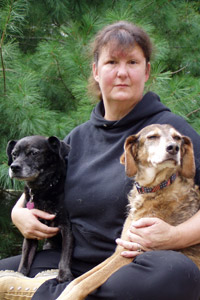 "Pontiac has approximately 40 percent of the population living in poverty," says Pam Porteous, Animal Care Network manager for the Michigan Animal Adoption Network. "The animals suffer. Lots of people just need help." The group has rescued over 14,000 homeless pets and has provided over 7,000 spay and neuter surgeries for pets as well. They work with local groups All About Animals, a high-volume spay and neuter clinic, and the Michigan Animal Rescue League to help increase the area's save rate. As our Network partner, they have been eligible for grants to help increase their lifesaving reach, and have received three spay and neuter grants so far.

Beyond using the grants to help spay and neuter more animals, the progressive animal organization has also utilized the marketing material from our Fix at Four campaign, which highlights the need for early spay or neuter of pets, and encourages the fixing of kittens and puppies at four months of age. By spreading the word about the lifesaving measure, the group has seen a sizable increase in younger animals being fixed, and they attribute the upturn to the promotion.

"The Fix at Four pamphlet is so easy to understand," says Pam. "It helps people who might be conflicted. There is a lot of misinformation out there about when you should have your pet fixed. One of the best things about early spay and neuter, besides stopping unwanted litters, is that it avoids behavior and health problems. That really resonates with people. We were getting 30 to 45 puppies and kittens to spay and neuter coming in monthly. Currently, we're getting between 50 and 60, so now it's considered normal to have your pets spayed at an early age." 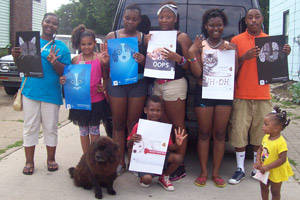 Pam has been working the area to help the companion animals for 20 years, and she's seen one resident's children grow up. Sandra's kids were all raised with awareness about fixing their pets. So it wasn't a total surprise when, after the children found a litter of kittens, their first order of the day was to get them spayed or neutered. Pam was thrilled to facilitate their request, and equally unsurprised when after they were fixed, the family wanted to adopt a few of them and get the rest placed with other local family members.

"All my animals are spayed and neutered," says Sandra. "My children love animals, and they want to help get them fixed so they're not adding to the population. My kids are always trying to help out stray animals. It feels good to know my kids care and that there's something they can do to help."

"Pam and her team do amazing work to maximize lifesaving by bringing awareness and services to low-income areas that do not have other options. They literally hit the street to educate pet guardians and facilitate the surgeries (even transporting the animals to and from the clinic if necessary). They are an exemplary No More Homeless Pets Network partner, and I am proud to assist them with the work they are doing."

Working together, we can make a difference and Save Them All.

Find a No More Homeless Pets Network partner near you.