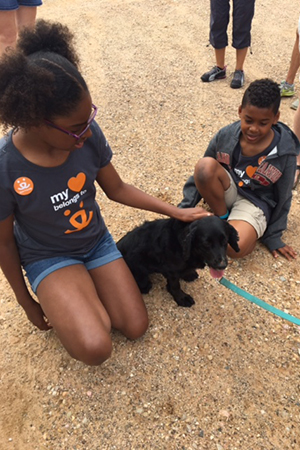 While some folks spend years planning a trip to Best Friends Animal Sanctuary, others just happen to stumble across it when traveling through the area or researching things to do in southern Utah. That’s how it was for the Walker Pettigrew family. But once they were here, Brittany, Jon and their kids (Hana and Kai) had an unforgettable experience.

Brittany and Jon had planned a trip to southern Utah to visit places on their bucket list, including Zion National Park, Bryce Canyon National Park and the Grand Canyon. They also wanted to make sure that Hana and Kai got the most out of the trip, so they researched things to do in the area with children. When Best Friends started popping up on their internet search, Brittany and Jon weren't 100-percent certain how to fit it in. But they knew they had to try.

The Walker Pettigrew kids get a weekly allowance and can spend 80 percent of it on whatever they want. Then they put 10 percent into savings and donate the other 10 percent to a charity of their choice. The kids get to pick the charity, and then they deliver a check directly to the organization.

Last year, Hana gave a portion of her allowance to Bad Rap Pit Bull Rescue, which is located not far from the family home in Oakland, California. Kai donated his share to the Marine Mammal Center, an organization that promotes ocean conservation and marine mammal rescue and rehabilitation.

Brittany and Jon knew that Best Friends Animal Society’s mission of bringing about a time when there are no more homeless pets, and its goal to make the U.S. a no-kill nation by 2025, would be right up Hana and Kai’s alley. “They are very moved and inspired by animal rescue,” Brittany says.

Plan your trip to Best Friends 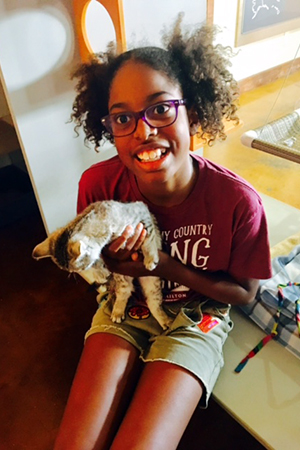 Despite a packed vacation schedule, the Walker Pettigrews found themselves at the Best Friends Visitor Center in Kanab. They had just taken a hummer tour through the Coral Pink Sand Dunes State Park to Peekaboo Canyon and then to the hidden lake on the Sanctuary property. As they came down through Angel Canyon, Hana (who loves all animals, but especially horses) counted 26 horses in the Horse Haven pastures and fell in love.

That cinched it. Even though the family was very hungry after the tour, they put lunch on hold to stop at the visitor center and book a Sanctuary tour. That’s where Hana and Kai discovered the kitten room and suddenly, no one was tired or hungry. They were far too excited about the kittens and their upcoming Sanctuary tour.

The next morning, the tour took them to meet dogs and cats to visit several other animal areas. And before they left town, Brittany and Jon asked the children if they wanted to give part of their allowances to Best Friends. The answer was an enthusiastic yes.

Though their time at Best Friends was short, they’ll be back. And next time, they plan to make the Sanctuary a bigger part of their trip by volunteering in their favorite animal care areas. There’s only one response to that. Walker Pettigrew family, welcome to the Best Friends family.

Sponsor an animal or become a Best Friends member