Image
Get some tissues ready for these sweet stories of cats returning home after a trip to the shelter.
By Lisa Goldstein

Editor’s note: Lisa Goldstein has met countless cats while trapping, neutering, vaccinating and returning felines prior to and during her time as a community cat program coordinator with Best Friends. No two cats are exactly alike, and in the following story she describes how people often struggle with returning friendly “stray” cats to where they were picked up. Their stories and lives ― much more than an address where they were found ― might surprise you.

Shelters and communities across the country are embracing the practice of “return to field” (RTF), an effective way to save the lives of thousands of cats each year. It’s a no-brainer when the cats are healthy but antisocial: Spay or neuter, vaccinate and return them to where they were found. But returning healthy, friendly cats to where they were found is a concept some find difficult to stand behind.

The notion that every friendly cat deserves the comforts and safety of an indoor environment may be noble in theory, but not every cat is suited for that lifestyle. To quote English author J.R.R. Tolkien: “Not all those who wander are lost.” The reality is that not everyone keeps their pet cats indoors, so it’s entirely possible that the seemingly stray cat suddenly showing up one day already has a home (or several). 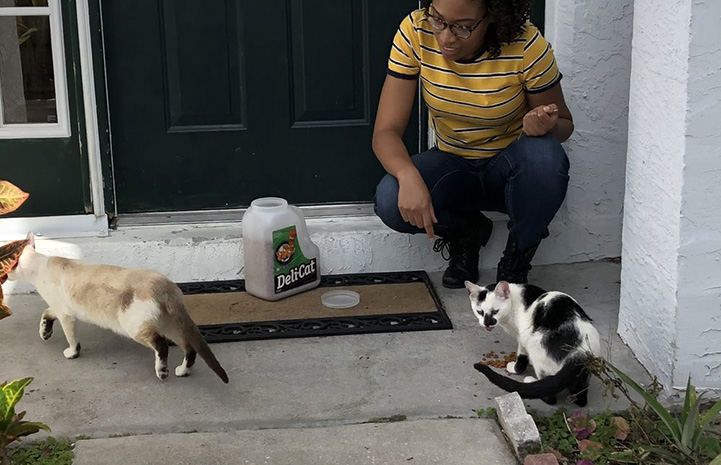 Cats spending some or all their time outside, whether friendly with people or not, make best use of their survival instincts. They learn where to seek shelter from the weather, and they know where to go for food and water. Additionally, behind all socialized community cats are people who put in the effort to get to know them. Those bonds should not be devalued just because their companions don’t live with them in a four-walled home.

In my years of doing trap-neuter-vaccinate-return (TNVR) in my own neighborhood and also through the Best Friends community cat program, I have met countless caregivers who genuinely cry tears of joy when their cats are returned to them. Marla Browne, national embed program manager for Best Friends Animal Society, believes that we should think of RTF as “return to feeder” or even “return the friendlies.” Cats aren’t left hanging. They go right back to where they were already thriving.

Here are some of my favorite stories about why returning cats to where they were found ― even if they’re friendly and it would be easy to adopt them into new homes ― is the best option for them and the people who love them.

The case of the missing mama (or when grown men cry) 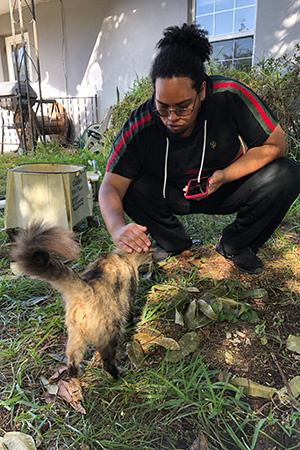 I was out talking to residents in a neighborhood trying to identify who was feeding the many cats in the area, so we could come with a plan to TNVR them. When I saw a few cats hanging out in a yard, Derek, the property owner told me he started feeding them after his elderly neighbor died. He got misty and asked me if I had seen MitMitts, who had been missing for about two months. He gave me a description of her and I said I would have a look at the shelter for him.

It was a shot in the dark, but MitMitts was there. A well-meaning neighbor brought her to the shelter and from there she was sent to a foster home to be socialized and then returned to the shelter. She was all ready to be placed up for adoption, but that wasn’t necessary because she already had a home. She was vaccinated and spayed at the shelter, and once she recovered, I loaded her into the Best Friends van to take her home.

Derek was waiting outside when I arrived. MitMitts walked out of the carrier, sniffed around a bit and went right to him when he called her name. Derek scooped her up, buried his face in her fur and gave her a big hug of relief. He started taking selfies and posted them online, even calling his ex to let her know that MitMitts was finally home. 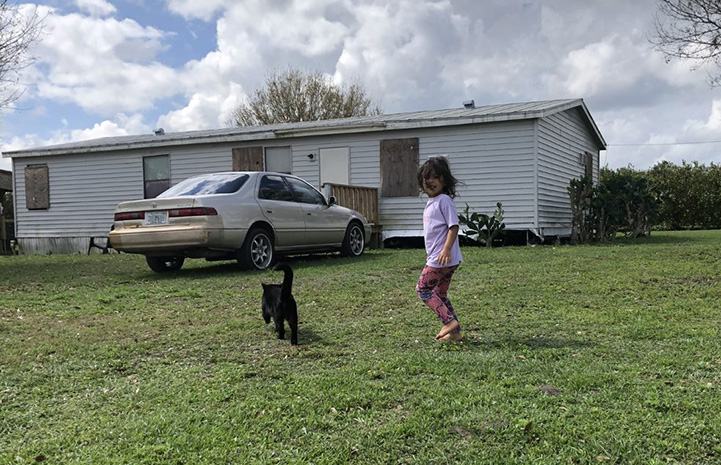 Looking underweight and exhausted, Cody appeared out of nowhere at the front door of a small home right in the middle of an orange grove. Because there were no other persons living within a mile or two, the tenants began feeding the bedraggled black cat to earn his trust because it was obvious he needed medical attention.

Though he was nervous about the adults, Cody was bonding with the young girl in the home and she was distraught when her parents took him to the shelter. But they didn’t know where else to go. They were relieved when the staff person told them that if he was healthy enough, he would be treated and returned. It turns out, Cody just needed some basic medical care and TLC.

When I pulled up to the house to return Cody, the daughter shyly came outside and hid behind her mom until I opened the carrier door to let Cody out. Watching them reunite was like a scene out of a romance movie as they ran happily toward each other and then were off to their favorite hiding spot. 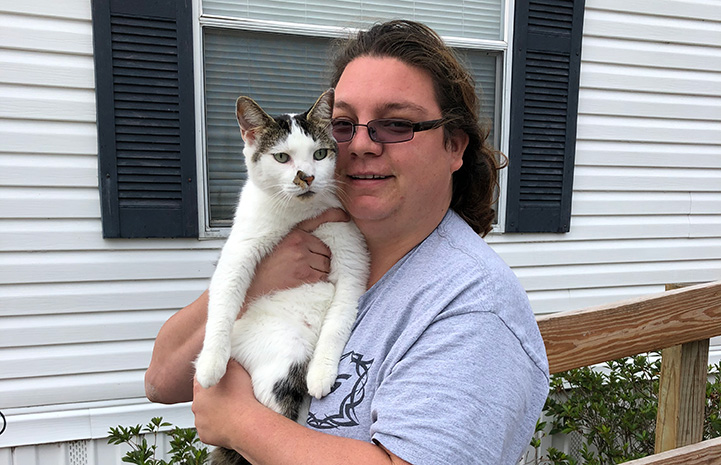 An indoor-outdoor cat who stayed out one too many nights, Moo was brought to a shelter by well-intentioned neighbors. It is estimated that only 3% of cats brought to shelters are reunited with their families. But luckily for Moo, he was turned into a Best Friends Network partner organization that returns cats to where they were found, so he got a free ride back home.

I parked the well-marked van on the street and started to knock on doors to see who might recognize him. As I was walking up the fourth or fifth driveway, I was greeted by a distraught woman who asked, “Do you have Moo? He’s been missing for about a week. We even filled out a lost pet report at the shelter.”

The shelter staff does its best to match pets reported as missing with those who come to the shelter, but it's not a foolproof system. Moo’s neighbors thought they were helping, but if it hadn’t been for the shelter’s return-to-field program, he would have been adopted into a different home and his people never would have known what happened to him. Thousands of cats just like Moo end up in shelters each year when well-intentioned people see them outside, scoop them up and bring them to the shelter, hoping to help them. 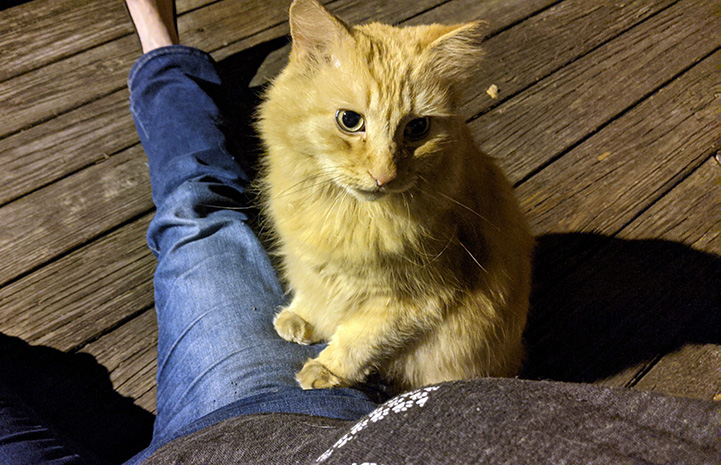 We’ve all seen The Lion King. As the story goes, when Mufasa dies, chaos ensues. And from my personal experience, this happens in cat colonies, too. Elrond, a cat in my colony who had already been neutered and vaccinated, was injured, so I brought him inside for a week to heal. During the week he was gone, the hierarchy of his colony seemed to crumble. Cats who had been friends were now fighting for dominance, and a newbie slipped into the fold.

Within a day of Elrond’s return, peace was restored (and, of course, I TNVR’d the newbie). While Elrond was in my care, he turned into the softest pile of fluffy orange mush, climbing in my lap, purring and kneading. He was taking his meds like a champ and had mastered the litter box.

I must admit: I was tempted to find him a home; however, that same week, another cat who was surrendered to the shelter looked like he could have been Elrond’s twin. It hit me that Elrond was already safe, and that I would rather see the cat in the shelter get adopted into a home because that was his only option. There was no reason for Elrond to fill up a space in a potential adopter’s home with other cats truly in need of homes.

Another two years have passed, and I am so glad I put Elrond back outside. I always suspected that he had another human in his life, and sure enough, a few months ago he showed up for dinner with a fresh haircut that I didn’t give him. If I had removed him, someone else out there would be missing him for sure.

Help cats near you