The old wives’ tale about cats having nine lives is usually fairly easy to dismiss. That is, until you meet a cat like Chloe.

Chloe is one of the toughest cats around. She survived Hurricane Katrina, for starters. Then, in 2009, she beat mammary cancer, and endured the subsequent two surgeries her disease required.

She also has feline leukemia. On that note, while she can’t "beat" feline leukemia, Chloe is in remarkably good condition. "She’s very healthy," says caregiver Joni Miller. "She really hasn’t had any colds in years."

One obstacle, however, proved harder than any other for her: learning to trust people. 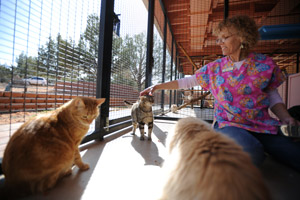 Chloe came to Best Friends in January 2006 after Hurricane Katrina. In the beginning, she kept well away from humans. "She started out as a really shy rafter cat," says Joni.

Caregivers gave Chloe her personal space, but that didn’t mean they didn’t still try and sneak in some affection on the sly.

For example, Joni likes to give treats to the cats when she leaves for the day. With Chloe, Joni had to literally climb up and set treats on top of the rafters. With this strategy, Joni found a secret weapon. "She definitely likes treats," says Joni.

After several months of putting Chloe’s treats on the rafters, Joni began setting them on the floor. Determined not to let a tasty morsel go to waste, Chloe would climb down. After a few months, Chloe began letting Joni pet her while she ate the treats. A few months after that, Chloe would actually run over to be petted before receiving the treats. The whole process took around a year.

At that point, however, Chloe’s progress toward trusting people hit something of a plateau. She’d reached a real milestone with connecting to Joni and other caregivers, but strangers remained questionable in her eyes. Yes, she’d let them near her, but usually not for long, and almost never for any real affection. She stayed this way for several years. 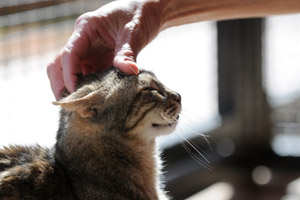 And then, as it happens so many times at Best Friends, something finally clicked in Chloe’s brain. All the hard work at socializing paid off. Chloe went from aloof to social butterfly almost overnight.

"In the last few months, she’s all of a sudden been coming down during tours," says Joni. "She’s in the middle standing there getting pets, and just enjoying it."

Chloe is a big hit among all volunteers. However, the long-term volunteers are probably the most delighted with her. These are the folks who have been visiting the Sanctuary for years but have never been able to really interact much with Chloe before. Now, she’s like a whole different cat. "They’re excited that she’s excited to see them," says Joni.

So no, cats don’t really have nine lives. But as far as Chloe is concerned, she’s going to spend the rest of her time never looking back.