Pampering for a superhero pig

Image
Pig gets the spa treatment at the Sanctuary, with expert hoof care and tusk trimming and a coconut oil massage. He also lives indoors for the winter.
By Christelle L. Del Prete

Sometimes, even superheroes need a hand — or a pedicure. Batman was long overdue for a spa day when he arrived at Best Friends Animal Sanctuary. Now, he’s a happy, healthy, well-groomed pig who has spent the winter being pampered in the office at Marshall’s Piggy Paradise. 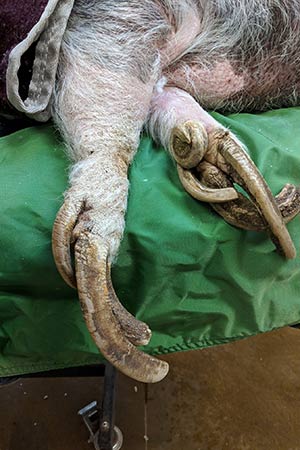 When Batman was brought to the Sanctuary in early January of this year, it was clear he’d gone for quite some time without even the most basic hoof care or tusk trimming. Although active pigs don’t need their hooves trimmed as regularly as more sedentary ones, from time to time all potbellied pig hooves require trimming (preferably by a pig farrier).

As for a pig with tusks (both males and females, with males requiring regular tusk trimming), a veterinarian experienced with potbellied pigs should do the trimming.

How to take care of a potbellied pig

A case of overgrown hooves wasn’t the half of it for Batman, who is estimated to be between eight and 10 years old. His hooves were so long that he could barely walk, and when he did, he limped. One of his tusks was so long that it had grown into the skin on his face, causing an infection with lots of discomfort. Getting Batman’s hooves and tusks under control was a top priority for his happiness and well-being, but it wouldn’t be easy.

At Best Friends, all potbellied pigs get regular spa days to keep them healthy. Because the trimming of tusks and hooves takes time and patience, pigs are usually sedated for both procedures. Batman’s tusks and hooves required more time and effort than usual, so Jen Reid, manager of Horse Haven’s Marshall’s Piggy Paradise, Best Friends veterinarian Tara Timpson and vet techs made Batman extra comfortable as they went to work. Dr. Tara trimmed his tusks while Jen (an experienced farrier who knows how to trim pig hooves) concentrated on his feet.

It was a huge relief for Batman to be able to walk comfortably again, and finally he was free from the pain caused by his ingrown tusk. But Batman’s new friends at the Sanctuary would soon find out that this pig required more pampering than most. 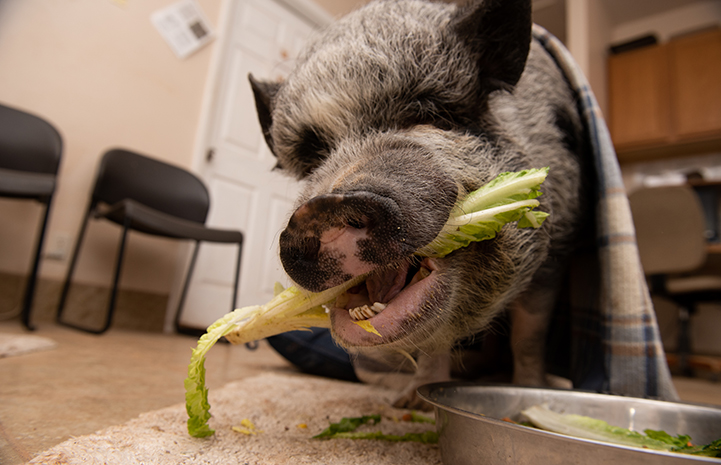 Pampering for a pig

After he was all fixed up, Batman moved into a cozy winterized enclosure behind the office at Marshall’s Piggy Paradise. But he soon made it clear (by moping around and picking at his food) that he was a house pig.

This winter in southern Utah has been particularly cold and wet, and Batman wasn’t having any of it. So, Jen and his caregivers moved him into the office and set up a big comfy bed in the middle of the main room. There, Batman settled in for the remainder of the winter. He still went outside for potty breaks (he is housetrained), but otherwise he preferred to be inside.

His special treatment continued as team lead Linda Meadows gave him a coconut oil massage to help his dry skin. Batman stretched out on his bed in pure bliss as Linda rubbed in the oil — from the top of his snout to the tip of his tail. In only a few months’ time, he’d gone from unkempt and uncomfortable to the lap of luxury. And the smile on his face told everybody just how good it felt to be a pampered pig. 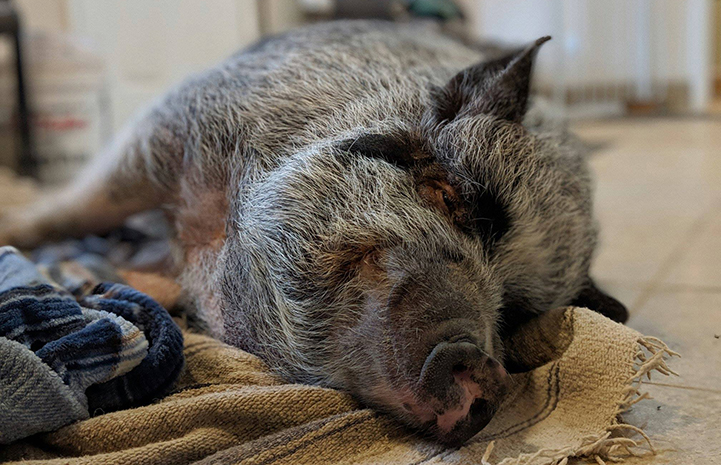