Bringing pets into our lives helps the pets, of course, but it's good for humans, too. We caught up with six families who in the past year adopted pets from Best Friends. All of them say that, while they will never forget the circumstances that inspired them to adopt, their pets are more than a companion to cuddle with for yet another movie marathon.

Seems that while pandemics don’t last forever, the love we have for our pets does. And if you’re looking for love and comfort these days, there’s no better time to adopt or foster a pet than right now, because animal shelters need support more than ever. 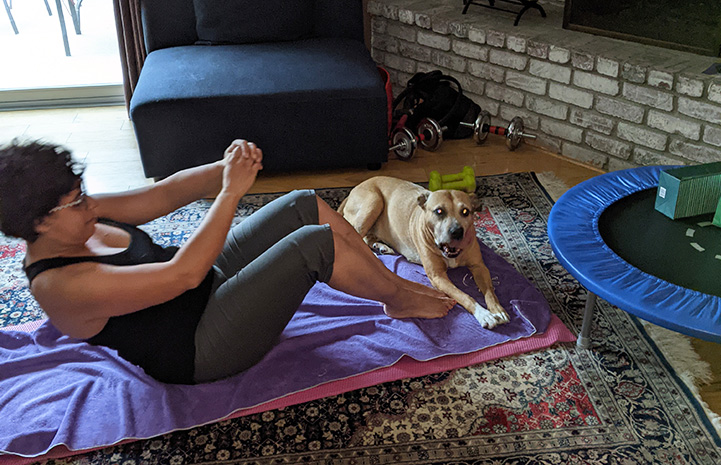 There’s no denying that the pandemic has thrown all of us one or more curve balls that we didn’t see coming. But for pets like Boxy Brown, who waited a little longer to find a home, the coronavirus came with a silver lining.

When Boxy Brown was at Best Friends in Los Angeles, she was so patient, loving and gentle with people that she was used as a model to help volunteers learn how to put on a harness. But her love of people usually didn’t extend to her fellow canines, or any other animals for that matter.

Boxy Brown needed to be the only dog in the home. This, coupled with her age and a skin condition (easily controlled with a special diet), was enough to keep her waiting a long time to be adopted.

Her wait ended last year when Erfan Marks and her family decided to adopt a senior dog while they were all at home during the quarantine. After they learned about Boxy Brown, they knew they had to meet her. When they did, they saw what a loving, sweet dog she is and adopted her.

Today, Boxy Brown is thriving in her home. “She continues to bring us so much joy and love,” says Erfan. “She is just amazing, and we are in love.”

Over the months, Boxy Brown has learned how to be calmer on walks when she sees other dogs (although Erfan says it’s still a work in progress). At night, she sleeps in Erfan’s room. She loves taking baths so much that Erfan refers to her bath days as spa days. And for Mother’s Day this year, Erfan got a T-shirt with Boxy Brown’s face as the “o” in the shirt’s “Dog Mom” graphic.

“I have several songs I have made up about her, for her — (just) as I have (done) and still do for my human kids,” says Erfan. “We are so grateful we were chosen to be her family.” 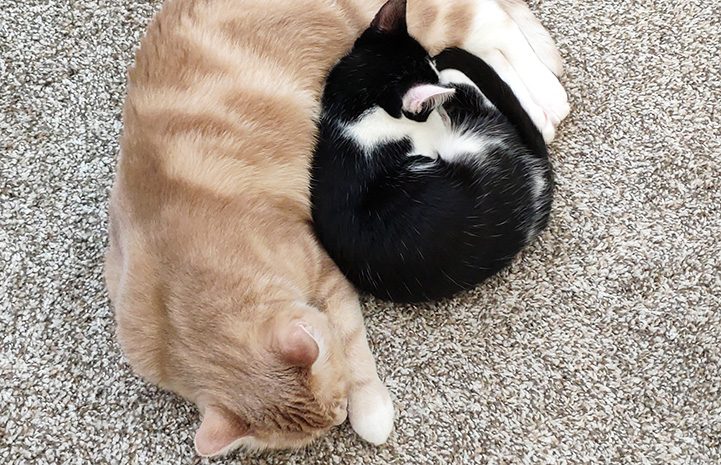 Chris Henderson had just moved from Scotland to Houston at a time when the city implemented a quarantine to help stop the spread of the coronavirus. It didn’t help that his fiance, Emma Guthrie, was waiting on her visa back home. Without her, it meant that Chris would have to get used to living in a brand-new country during a very unusual time — all by himself.

Not to worry, though, because Chris had the prefect remedy: He’d adopt a kitten from Best Friends in Houston. An online search led him to Peach, and soon after that, he was alone no more. Together, he and Peach took part in video chats with Emma, who instantly fell in love with the wee kitten.

Today, Emma and Chris are reunited, and Peach has a little sister named Lyra, also adopted from Best Friends. “Peach has gotten to be a really big girl, but still loves running around and playing,” says Chris. “Adopting her was the best decision I made during the pandemic by a large margin.”

Gus, a dog larger than life 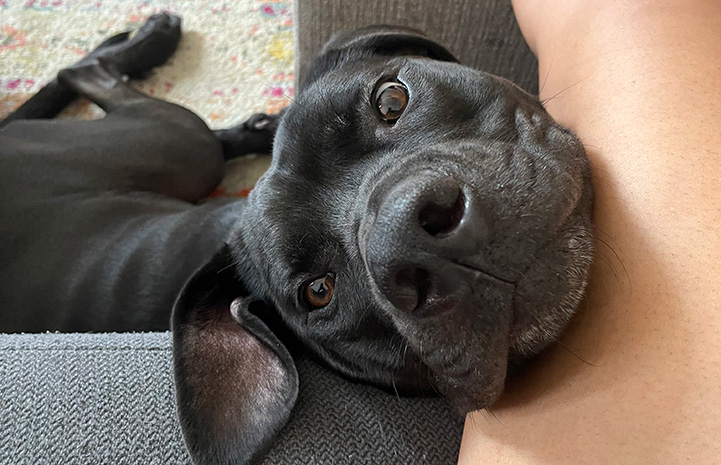 Melissa Ruiz and David Hanson were planning on adopting Gus from Best Friends in New York, but wanted to wait until they were able to take part in some training classes with the young dog — that is, until they learned that a statewide stay-at-home order was about to go into effect.

They worked with the team at Best Friends to adopt Gus in the nick of time before the lifesaving center temporarily closed. That made him one of the first dogs from Best Friends adopted during the pandemic.

Since Melissa and David would be at home for the foreseeable future, they would have plenty of time to help young Gus, who had a tendency to be easily startled and reactive on walks. They began by taking advantage of the quieter-than-usual streets in their Harlem neighborhood, and they got valuable help from a Best Friends trainer who sent them videos and a training program to follow.

So, how is Gus doing now? Very well, says Melissa. Recently, Gus completed two weeks of additional training. Now he’s a pro at loose leash walking and is getting much better at being left alone. It’s a lot for a young dog to learn, but Gus is an eager student.

“Three things that are still confusing to Gus are people on skateboards, mom and dad kissing and other dogs,” says Melissa. “Three things he loves are peanut butter, long walks in the park and sleeping on mom and dad.” 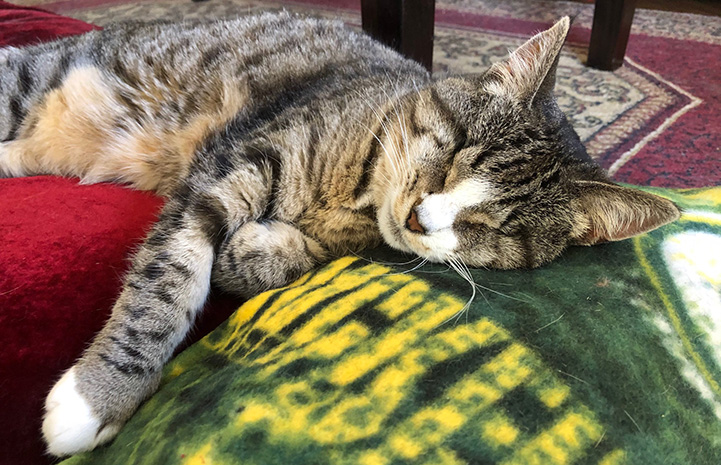 Janine Pibal and her boyfriend were looking to adopt a cat with special needs when they learned about Fizzgig, a blind senior cat who was brought to Best Friends from a Los Angeles Animal Services shelter. Thinking that helping Fizzgig adapt to their home would make life a whole lot more enjoyable during the pandemic, they decided to meet her, fell in love with her strong-willed spirit and adopted her.

At first, Fizzgig mapped out every corner of her new home, and whenever she became frustrated or disoriented, Janine remained patient. That patience paid off for Fizzgig in the most wonderful of ways. “You can tell she is relaxed, calm, comfortable, happily peaceful and wholeheartedly enjoying her new life,” says Janine.

Over the past year, Fizzgig has settled into her home by using all of her available senses to mind-map the place. She even creates stimulating obstacle courses for herself: For example, she’ll choose to walk deliberately around corners of the room, perfectly stepping over all items in her path.

“Fizzgig is an incredibly loving and brilliant cat who has filled our lives with joy,” says Janine. “We’re so happy to care for her, as she is such a beautiful and beloved member of our family.”

Romeo, the kitten who helped heal a boy’s broken heart 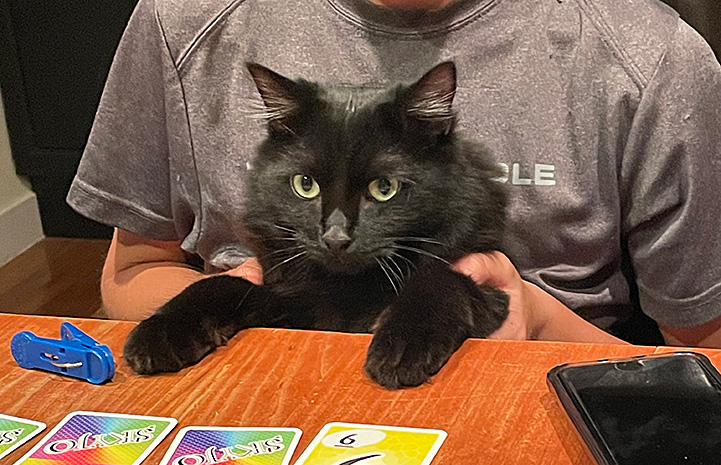 When the Sweeneys’ cat, Oscar, passed away unexpectedly last fall, it was Lucas, their son, who felt his loss the most. Oscar and Lucas were especially close. In fact, he had given Oscar a special name, VGK, which was short for Very Good Kitten. So, when Lucas had to be in quarantine because of exposure to COVID-19 at school, his mom, Laurie, decided it was the perfect time to foster kittens from Best Friends in Utah. Not only could fostering help Lucas cope with all the extra time at home, but Laurie thought it just might also help heal his broken heart.

She took it as a good sign when Lucas could hardly wait to open the carrier containing Walter Werewolf, Manfred Mummy and Vincent Vampire, the three kittens the Sweeneys would be fostering. Lucas was particularly taken with Walter Werewolf, who is black and cuddly, just like VGK.

When it was time for the kittens to be adopted, Walter stayed, and Lucas gave him a new name to go with his new life: Romeo.

Now Romeo is Lucas’ best friend. “He is playful and adventurous, but loves a good cuddle all the time,” says Laurie. The Sweeneys are still fostering kittens and it only takes Romeo a few days before he’s playing and snuggling with them. “We look forward to many years with our beloved boy,” says Laurie. 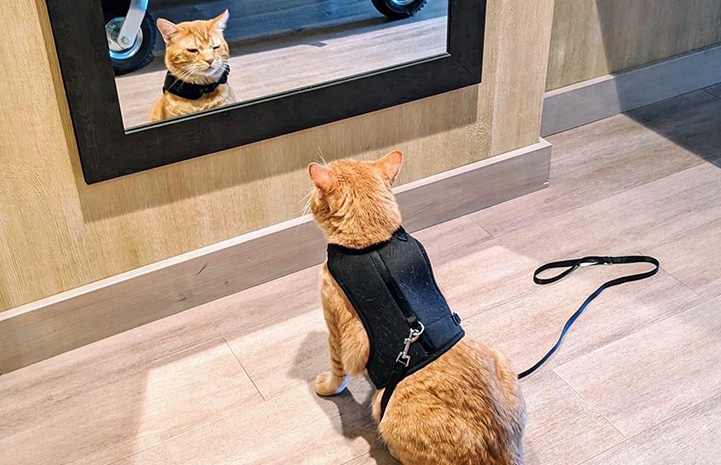 From the first time Diane Barber shared a Facebook post about him, Steak the cat was a big hit with her friends. And judging from their comments and number of “likes” he received, the big orange tabby (fostered by Diane from Best Friends in Los Angeles), was just what everyone needed back when happy hours had to be celebrated via Zoom.

One of those friends was Doug Parker, who loved getting Steak updates so much that he decided to adopt him. There was only one challenge: Doug lives in Houston.

Luckily, Diane had the solution. Once the quarantine in was lifted in Los Angeles, she and her partner, Karen, hit the open road with Steak to make the 1,500-mile journey to Houston, where Doug was waiting. Along the way, Steak proved to be an excellent traveler. Highlights of the trip include picnics, strolls at rest stops and arriving to applause for being the first feline guest at a new hotel.

According to Doug, Steak has adjusted quite well to life in Texas and has two tuxedo “stepbrothers,” Jack and Dom. “Steak is a creature of habit,” says Doug. “He spends most of his day lying in the open lid of my baby grand piano or in a very specific spot on an antique chest looking out a window.”

At 3 p.m. on the dot, every afternoon, Steak comes into Doug’s home office and talks loudly until Doug lets him up on his lap for scratches. And at night you’ll find Steak outside on the patio, basking in the summer heat while Doug brushes him.

Judging from the purrs (that are so loud they’re distracting, says Doug), Steak is a very happy cat. Now, it’s Diane who looks forward to updates about him.

Your next BFF is closer than you think

Need a new partner in fun? Now is the time to adopt or foster a pet from your local shelter.