Image
Two senior grandpa cats, who are the best of friends, are adopted by a loving couple. Read the heartwarming geriatric cat adoption story.
By Christelle L. Del Prete

Going through a tough time is always a little easier if you have a good friend by your side. Pyro and Raoul, both senior cats, lost their homes and ended up at a rescue organization in Texas before coming to Cat World at Best Friends. That’s a lot of change for anyone to go through, but the two cats became such good friends, they didn’t get depressed like some homeless animals. But ultimately, they still needed new homes.

There are many senior cats looking for homes, and senior animal rescue is one of the many ways Best Friends works to end the killing in America’s shelters by 2025 and ultimately to Save Them All. But it’s not every day that people come to the Sanctuary looking to adopt a senior cat, let alone a pair of them. Then one day, it happened: Pyro and Raoul got their new home together with Lucy and Ray Tocci.

Even though Pyro and Raoul weren’t so dependent on the other that they couldn’t have gone to different forever homes, they shared a sweet and special camaraderie. They clearly preferred each other’s company to that of any of the other cats in their room at Cat World. They both enjoyed walking on a harness and leash, especially when Cat World caregivers or volunteers took them outside together. Like two grandpa cats, they could often be found lounging around and taking afternoon naps. 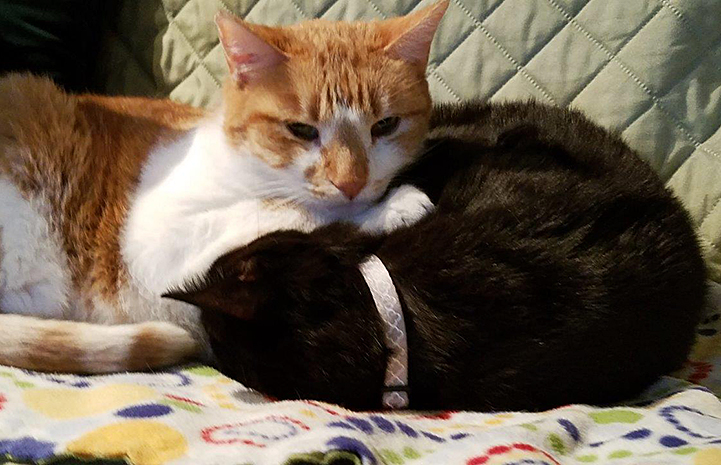 Meanwhile, Lucy and Ray, a cat-loving couple from New York, had lost their own beloved geriatric cats over the past three years. They missed having feline companions in their home and were talking about adopting senior cats to fill the void. As longtime Best Friends members, they were also considering a trip out to southern Utah to volunteer at the Sanctuary for the first time. Then they thought: Why not do both at the same time?

“We knew we would adopt from somewhere,” Ray says, “and it was a no-brainer (to adopt from Best Friends) when we started talking about coming out here to the Sanctuary.”

No-brainer or not, the couple took their time choosing their new companions. They wanted to find two cats that would be a good fit for them and vice versa. So, while they did a few Dogtown volunteer shifts walking puppies and senior dogs, they spent most of their volunteer time getting to know many different cats, talking with caregivers and a Best Friends adoption specialist and paying special attention to the older cats’ behavior while they worked at Cat World. 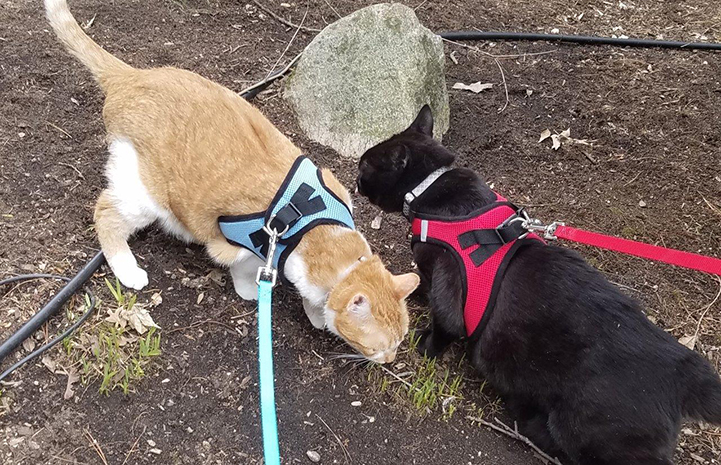 “We wanted a pair of mature cats around 11, 12 or 13 years old, so we could still give them a great quality of life for the rest of their lives and maybe even their first forever home,” says Lucy.

Because there are so many deserving cats ready for forever homes, it was a difficult choice for Lucy and Ray. “It's truly difficult to visit Best Friends and not come home with a caravan of furry friends,” says Lucy.

Delighted to hear that the couple had space in their home for older cats and were considering senior cat adoption, Cat World caregivers helped introduce Lucy and Ray to dozens of good candidates. In the end, though, Pyro and Raoul stole their hearts. 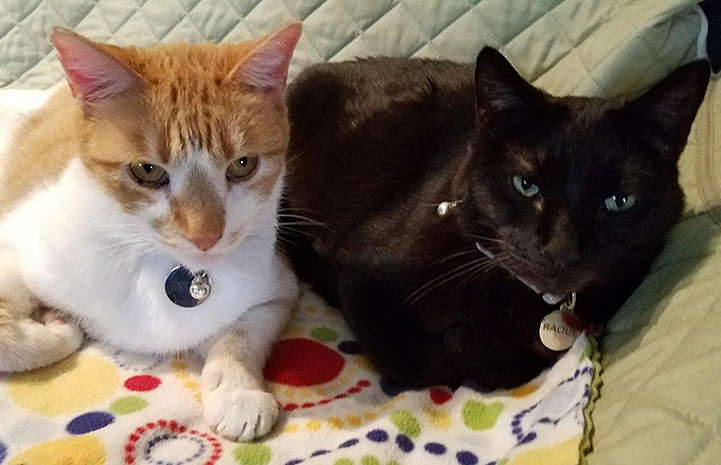 Raoul sealed the deal by immediately attaching himself to Ray. After meeting the winsome pair, the couple didn’t want to go home without them, so Ray spent hours making special arrangements for their new family members to fly home with them to New York. They even upgraded their seats to make sure the transport carriers would fit underneath them.

Six weeks later, the cats have more than settled in at their new home and have become the perfect match for Lucy and Ray. “Pyro and Raoul are doing very well and have taken over our household (rightfully so),” Lucy says. “Chronologically they might be 12-year-olds, but they don’t know it since they are so active. Don’t underestimate senior cats. They are so much fun, constantly make us laugh, and we love them so much.” 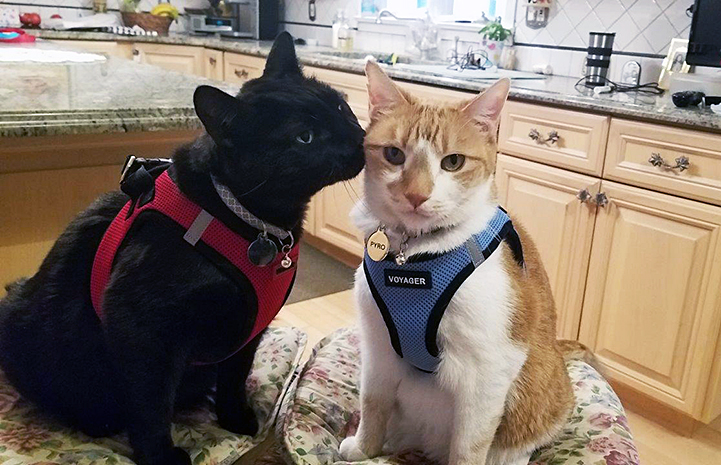 Though they didn’t know it when they adopted Pyro and Raoul, that love would help see the couple through the loss of a family member shortly after they returned home. The cats have brought them comfort, says Lucy. "There’s a calmness with animals when you’re hurting. They seem to know their place, and with Pyro and Raoul, it’s right on our laps where we listen to their musical purring.”

The thought of returning to Best Friends one day also gives the couple something to look forward to. “It’s spectacular,” says Ray. “We had some vague ideas of what it would be like, but until you go to the Sanctuary and see it for yourself, you don’t really understand what’s happening there. We’ll be back.”

And it’s entirely possible that, the next time they visit, the couple will open their hearts and home to another lucky pair of adoptable cats. 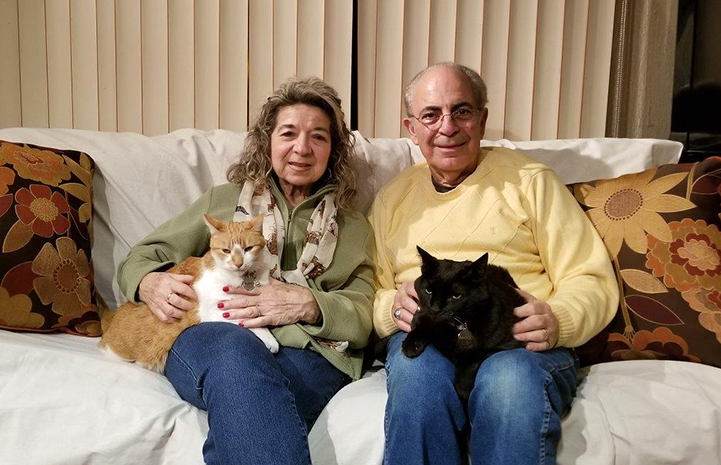