Senior diabetic cat finally gets her day in the sun

Image
Dizzy may be 11, have diabetes, FIV and a reputation for being a bit grouchy, but to her adopters she's pretty much perfect.
By Drew Schott

Andrea Shaw expected to wait a year before getting another pet. After losing Abby, her 20-year-old cat to thyroid issues, she and her husband, Philip, planned to spend most of 2020 traveling before thinking about getting another best friend.

Then the spread of COVID-19 halted their vacation plans and caused them to remain at home in Atlanta. But Andrea and Philip found a silver lining amid the global pandemic: They decided it was the right time to save the life of a senior cat. By the end of April, they adopted Dizzy, an 11-year-old with a gorgeous black-and-white coat and piercing hazel eyes.

Dizzy was found near the Georgia Aquarium and taken to an Atlanta municipal shelter. Eventually, she was transferred to the Best Friends Lifesaving Center in Atlanta. That’s where she was diagnosed with diabetes and the feline immunodeficiency virus (FIV).

To manage her diabetes, Dizzy received insulin injections twice a day. And to make sure she stays healthy, she was checked out by a veterinarian twice a year (like all cats with FIV). 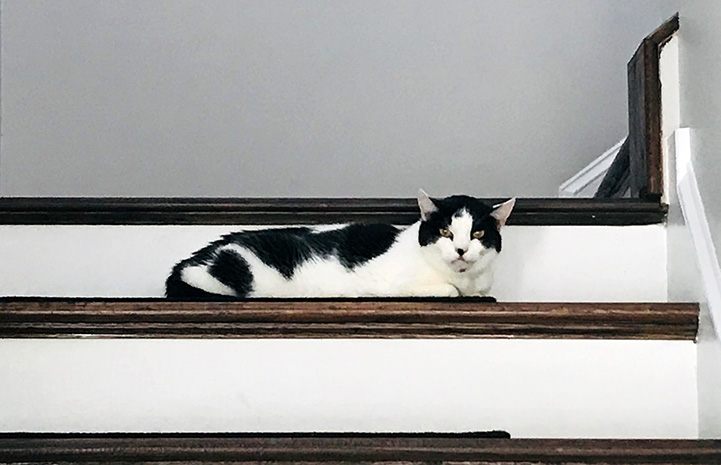 Ashland Rhodes, operations lead at the center, vividly remembers her unique introduction to Dizzy last September. It was her first day at Best Friends and there to welcome her was Dizzy, who sniffed her calmly as she approached. Then, seconds later, she tried to swat Ashland with her paw.

Despite their unexpected first encounter, Dizzy became comfortable with Ashland by the end of the day. “I wouldn’t say we were best friends at that point,” she says, “but she would let me pet her and interact with her a little bit.”

In the following weeks, Dizzy enjoyed Ashland’s company so much that she became her daily office companion. On any given day, you could find Dizzy lying on top of Ashland’s computer while she worked.

Ashland remembers Dizzy doing some funny things at the center. For example, not wanting Dizzy to sleep on hard office floor at night, Ashland bought the cat a new, comfy bed. But Dizzy was not a big fan of it. So she tried again with a different bed and got the same result. When Dizzy rejected a third bed, Ashland finally found something she loved — a giant dog pillow.

“(Dizzy) was always very excited to see somebody in the office,” Ashland says. “She’s like: ‘Oh good, someone’s back, someone’s going to pay attention to me.’” Somebody else was paying attention to Dizzy, too. She just didn’t know it yet. 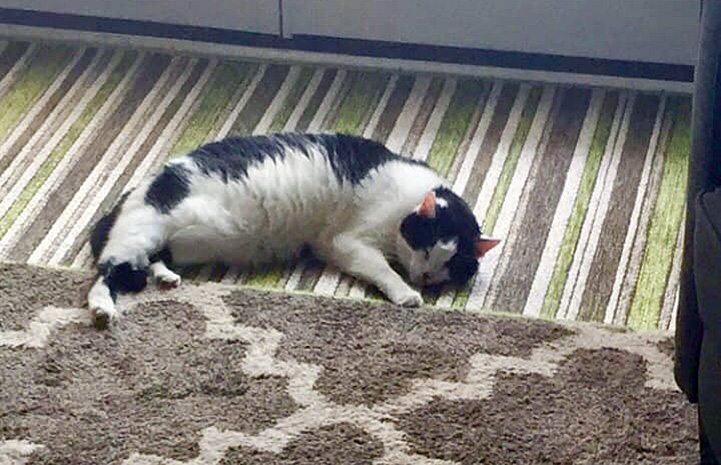 Moved by a cat’s story

When Andrea started looking online for cats to adopt, she and Philip knew exactly what they were looking for. “We wanted to save the ones that people pass over,” says Andrea, who found Dizzy while searching on the Best Friends website. “Her story is what got me.”

Next, they scheduled a visit. When the COVID-19 pandemic required the center to temporarily close, Dizzy, like many other pets at the center, went to stay in a foster home. That’s where the meeting took place (while following social distancing protocols, of course).

Cats can have a difficult time adjusting to new surroundings and this was definitely the case for Dizzy. In her foster home, she hid from those trying to nurture her and was prone to bouts of grouchiness.

Ashland says cats in general don’t like change and their natural reaction when stressed is to hide. These behaviors, in turn, can cause adopters to instead consider other more outgoing cats. “That’s just not the type of cat Dizzy was — until you gave her that chance,” she says.

When the couple met Dizzy for the first time, they were excited to interact with her And in a surprise twist, Dizzy reciprocated by letting them pet her. One of the reasons the Andrea and Philip wanted to adopt Dizzy was because they feared she would be passed over due to her age and medical issues. And following that foster visit, they knew they were ready to give Dizzy her forever home.

“We decided that we could do it,” says Andrea. “We do have the time to put into her and commit to her, even to the point that when we go out of town, we would have to find a sitter to give her insulin injections.” Within a week of the visit to her foster home, the adoption was complete. 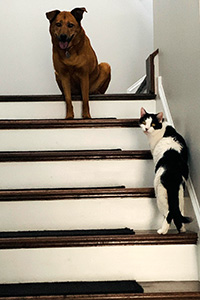 While at the shelter, Dizzy spent more time with humans than other cats, so she was in for a surprise in her new home. A new sibling name Lola, a 10-year-old shepherd mix who similarly was rescued by the couple off the streets of Atlanta, was waiting for her.

At their first meeting, Lola really loved her new sibling. She enjoyed sniffing and kissing Dizzy, as well as playing with her; however, from Dizzy’s perspective, it wasn’t a match made in heaven. She didn’t want to interact with Lola, and she even got upset sometimes when Lola bothered her.

Three weeks later the two were inseparable. Dizzy and Lola can often be found these days sleeping side by side and nuzzled up close to each other. And they have a playful relationship, which is obvious as Dizzy enjoys stealing Lola’s food and sleeping spot.

Dizzy loves her new parents and enjoys sitting in their laps and purring as they pet her. One of Dizzy’s favorite pastimes is lounging by Andrea while she works on her computer — just like she did when she was an office cat at Best Friends.

If one thing is clear, it’s that Dizzy knows how to have fun. She loves playing fetch with herself and tosses her feathered toys up in the air while running around the house. She also enjoys lounging on the back deck. Andrea says it’s precious to watch as Dizzy lies on her back relaxing in the sun.

In terms of Dizzy’s medical issues, Andrea and Philip are doing their best to help her stay healthy. To control her diabetes, they give her an insulin shot every 12 hours and keep tabs on possible behavior changes (that can occur in both pets and people when insulin levels are too low or high). And since she has FIV, she’ll get vet checkups every six months to keep on top of any health issues.

The best news ever

When Ashland found out that Dizzy had been adopted, she was ecstatic. Someone finally had found her quirks as endearing as she did. It took a year, but Dizzy finally found a loving home. Even though she has only been with Amber and Philip for a short time, she’s proof that older cats with special needs can be the perfect best friend. 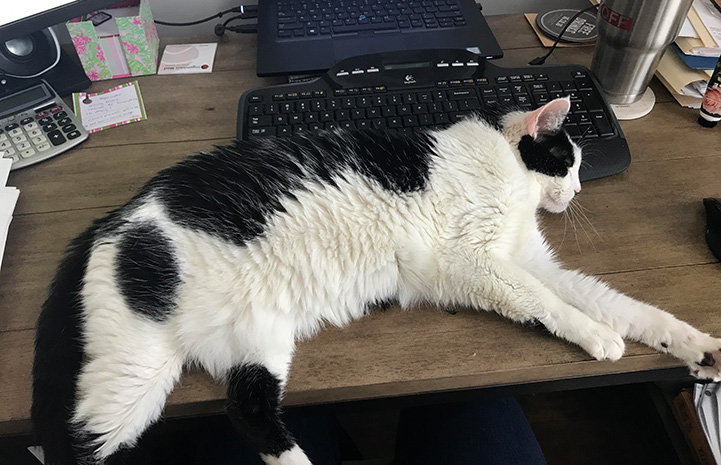