Image
Older pets get a second chance at love, thanks to a Best Friends grant.
By Denise LeBeau

Nellie is one of those perfect pets who lost her home through no fault of her own. The sweet brown tabby cat had a loving home for most of her life until her person lost her job and her home. That’s how Nellie ended up at the Norfolk Animal Care and Adoption Center in Norfolk, Virginia. It can be tough for senior cats to find homes when there are loads of cute kittens getting all the attention from adopters. Nellie’s kitten years were far behind her, but that wasn’t all. She’s also blind. A senior cat who is blind and living in a busy municipal shelter runs a risk of being killed, and that’s why Norfolk Animal Care and Adoption Center has a special program for cats in this situation. Recently, Best Friends helped make sure a lot more of them find homes. 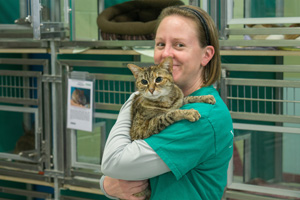 Norfolk Animal Care and Adoption Center’s Golden Paws program is in place to increase senior pet adoptions at the shelter, which helps animals just like Nellie. Lowering adoption fees is one way to help pets find homes faster. Sometimes the difference of a few dollars is enough to help people take notice of pets who otherwise would be overlooked. Because these programs need money to work, Best Friends’ Network partner grant program could help Nellie and many other senior pets like her at the Norfolk center.

Friends of Norfolk Animal Care Center, an organization that works closely with the center, is part of the Best Friends No More Homeless Pets Network, a group of rescue organizations and municipal shelters across the country working to end the killing of animals in our nation’s shelters. As a Network partner the group is eligible for grants from Best Friends, so they applied for and received a $10,000 grant to enable them to lower adoption fees for 250 pets in the Golden Paws program.

Because of the grant, Nellie’s adoption fee was reduced from $75 to $35. Shelter staff knew that sweet Nellie would make a great pet if someone could just see past her age and the fact that she is blind. They hoped the reduced fee would help someone notice her, and then fall in love.

Nellie got her chance when Jennie Wright met and took care of her during her volunteer shift at the shelter. Jennie says, “When I met Nellie I thought, how sad that this poor older, blind cat is in a shelter. If she’s lucky enough to be adopted, she’ll have to adjust to a completely new home.” 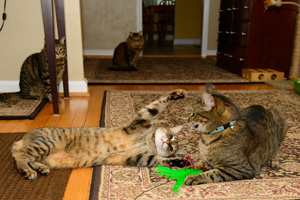 Then, a week later, Jennie saw Nellie on the shelter’s Facebook page as part of the Golden Paws program, and it just clicked. Even though Jennie already had three cats and wasn’t looking for a fourth, she began to think maybe her home could be Nellie’s home. Jennie decided to give Nellie a chance, and brought her home.

And Nellie is showing that senior pets can have plenty of zest for life and that her blindness doesn’t slow her down. “She loves to chase after our other cats and wrestle with them,” says Jennie. “I don’t know how Nellie does it, but she plays and jumps just as any other normal cat does.” She also purrs nonstop, even when she’s sleeping.

Nellie became one of the 250 pets who will find great homes because of the Best Friends grant. Each one is proof that when it comes to love, age doesn’t matter.

Keep the successes coming by giving to help more animals.

Photos by by Jennie Wright