Image
Shelter dogs in Texas and other regions are being transported to Minnesota and other states, where the demand for dogs to adopt is higher.
By Kelli Harmon

Doc is living the best life a dog can have: He not only has a loving, comfortable home, but his new family brings him along on camping and boating outings. At night on these trips he cuddles up in the tent, nestled between the family’s two kids. Doc’s family adopted him from Animal Allies Humane Society, a shelter in Duluth, Minnesota. 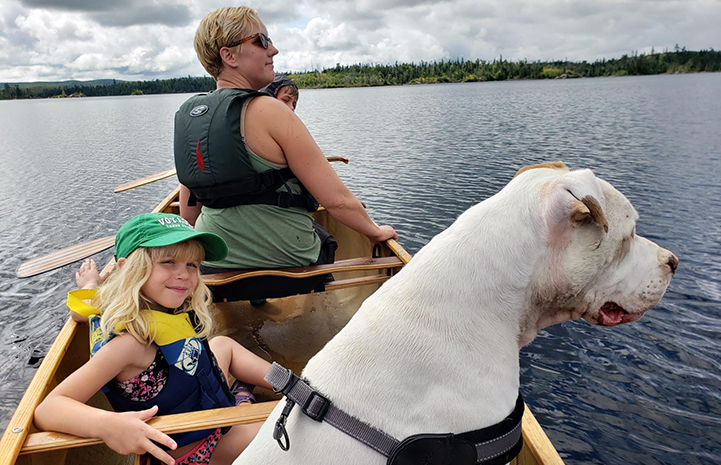 The reason the big white dog and thousands more dogs of all shapes and sizes are in happy homes is an incredibly busy network of shelters and rescue groups — first saving pets in Minnesota and then opening their doors to shelter pets from other states whose time and luck have run out. It’s a growing trend in animal welfare over the past decade, and it’s making life better for shelters near and far.

Animal Humane Society (AHS), the largest shelter in Minnesota, has been serving pets in the state since 1878 (more than 140 years). Along with many other organizations in the state, AHS has done such an outstanding job promoting adoption and spay/neuter, and educating the public through its lifesaving programs.

Beginning about 10 years ago, adoption had become so popular and residents were so well-versed on the benefits of spay/neuter that AHS faced a situation that had never come up before — more adopters than dogs (a good problem to have).

“People were looking for dogs to adopt and we just didn’t have a lot coming in from the community,” says Anne Johnson, director of shelter support at AHS. Throughout the shelter’s long history, AHS has accepted every local animal brought in (and still does).

And while an abundance of cats was still arriving, it seemed that the Twin Cities had reached a tipping point for dogs.

“So we looked at what could we do,” says Anne. “How could we make this better — not just for our community but for the nation?” The answer was transports. 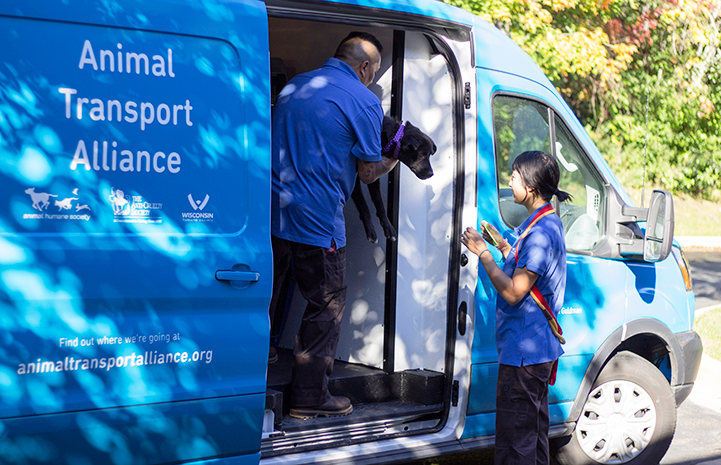 How to save shelter pets

The Twin Cities and a growing number of other communities have made outstanding progress down the path of lifesaving. These communities have programs to help people keep their pets, trap-neuter-return programs for cats and low-cost spay/neuter, as well as many foster-based rescue groups taking in pets from shelters and placing them in homes. Things began to shift in Minnesota about a decade ago, and they’ve only gotten better since.

Meanwhile, shelters in other areas don’t have the same programs that save lives. They still struggle with massive numbers of pets coming in and not enough ways to help them get out alive. “The disparity between communities is a distinct area of need,” says Anne. “They are euthanizing healthy adoptable dogs for lack of space.”

About 10 years ago, AHS began taking dogs from shelters in Oklahoma, Alabama, Tennessee and Louisiana. The program started small, bringing in a about two dozen dogs at a time and growing to become a shining example of how many lives can be saved by transports. In 2018, AHS reported taking in more than 9,000 animals (mostly dogs) from other shelters. Though AHS is the largest shelter in the state with four facilities in the Twin Cities area, it is not the only facility transporting adoptable pets across state lines.

In fact, AHS is one of many organizations doing similar work to give Minnesotans plenty of opportunities to adopt dogs and puppies, while also saving the lives of shelter animals in other states. 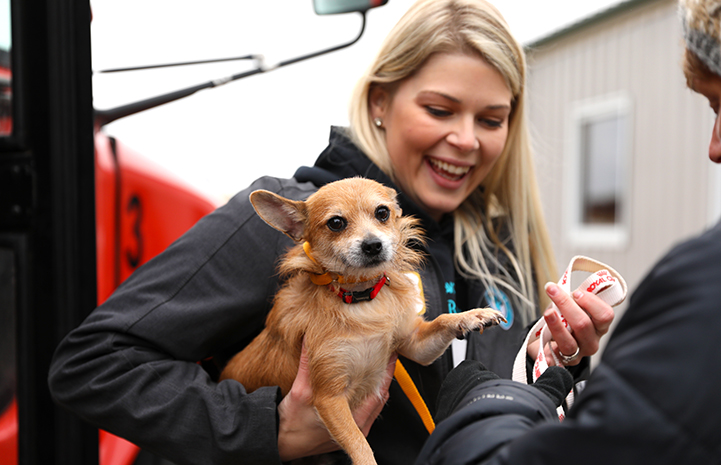 Michelle Dosson, regional specialist at Best Friends says: “We focus our grant-giving on organizations that go above and beyond in their work. We want to fund programs that maximize impact and reduce shelter deaths of the most vulnerable pets at overcrowded shelters.”

Remember Doc, the sweet dog living a charmed life with his new family? He’s alive and well today — in part because of a $10,000 Best Friends grant awarded to Animal Allies Humane Society in Duluth, Minnesota. The grant supports bringing in pets from both in-state and out-of-state shelters that need help.

“Transports are important because we are saving lives,” says Lindsay Snustad, director at Animal Allies. “Not every community has the resources or the support that we have in Duluth and greater Minnesota. It is absolutely our job and within our power to think beyond our small pocket of the world.”

Animal Allies frequently works with Rockwall Pets, an organization that helps Dallas Animal Services by taking in dogs and either placing them locally or getting them to out-of-state shelters with capacity. A 2016 Best Friends grant enabled Rockwall Pets to purchase its first van, which has logged thousands of miles saving hundreds of pets. This year, Rockwall Pets received another Best Friends grant, and now a second larger van helps save even more pets in support of Dallas Animal Services.

Christina Arriaga, executive director of Rockwall Pets says: “Our partners and friends around the country want to help. It breaks their hearts to hear how many great dogs are still dying here due to lack of space. They have empty kennels and eager adopters. It's a win-win for everyone to send as many as we can, as fast and frequently as we can.”

Christina was out of town on a transport when she saw the urgent plea about Doc from Dallas Animal Services. The pit bull-terrier-type dog needed medical care, but the shelter was full. Rockwall Pets contacted Animal Allies in Minnesota to try and save him.

“Doc literally needed Animal Allies to approve taking him within minutes or he would not have survived,” says Christina. “We were in tears when we got the yes, and we had a local foster pick him up that day from the shelter.” Soon, Doc was on his way north — one of many dogs who, thanks to a transport, got a second chance. 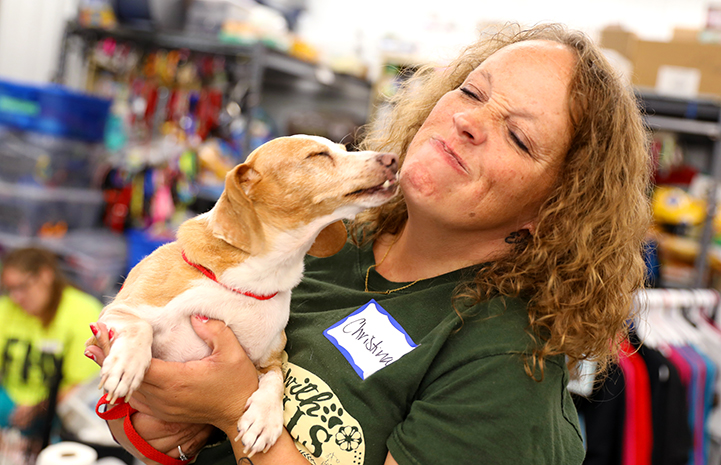 Much love for Texas dogs in Minnesota

Ruff Start Rescue, another network partner based in Minnesota, is a large foster-based group with a passion for helping dogs, primarily in Minnesota but also in Texas. Its goal aligns perfectly with Best Friends’ work to help shelters most in need, because Texas has the nation’s largest lifesaving gap (the difference between where things stand today and achieving the no-kill threshold, a save rate of 90 percent). Ruff Start had already been helping Texas shelters by taking in dogs, but it was a trip to the Harris County shelter in Houston that renewed its commitment.

Azure Davis, Ruff Start founder and executive director, learned firsthand how crowded the Houston shelter is and how hard its staff and volunteers work to save as many lives as possible. “We always knew Texas needed help and we have provided relief year after year,” she says, “but it wasn't until I went to Texas with two of our directors in September 2018 that we realized the extensive need for even more help. It was eye-opening, and we are determined to help make a huge difference in the coming years.”

Ruff Start received a $20,000 Rachael Ray Save Them All Grant from Best Friends to support its work taking in dogs from the Harris County shelter. Now each month, a van full of dogs heads from the shelter to Ruff Start’s headquarters in Princeton, Minnesota.

“There is just no reason that these healthy, friendly, adoptable animals should have to die due to lack of space,” says Azure. “It's completely unnecessary when we have the will and resources to help them here in Minnesota." (Once the dogs are entered into the group’s 350-plus foster home network, they are usually adopted quickly.)

When Doc arrived at Animal Allies from Dallas, Texas, the shelter raised funds for two surgeries that he needed. While recovering at Animal Allies, Joe Carpenter and his six-year-old daughter, Adeline, went to the shelter on a whim. Joe says it was Doc’s classic “puppy-dog eyes” that first made him take notice, but it was the big white dog’s gimpy leg and mopey face that captured his heart. 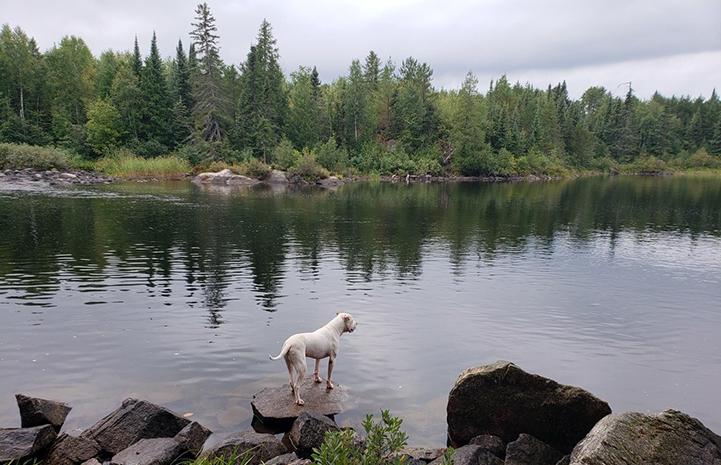 Joe says that Doc’s mopey demeanor disappeared as soon as they met. “He jumped up on the bench next to us and licked our faces. Then he spotted a toy on the floor, grabbed it, rolled over onto his back and held it above his head with his front paws. He was comfortable with us immediately, and I knew that he was going to be our boy.”

The rest, as they say, is history. Doc no longer has a reason to look mopey, because he’s in his forever home. Doc is only one example of the many dogs who started life in places where the local shelter couldn’t help them. But thanks to partnerships across state lines and a willingness to go the extra mile, these dogs have long, happy lives ahead of them. 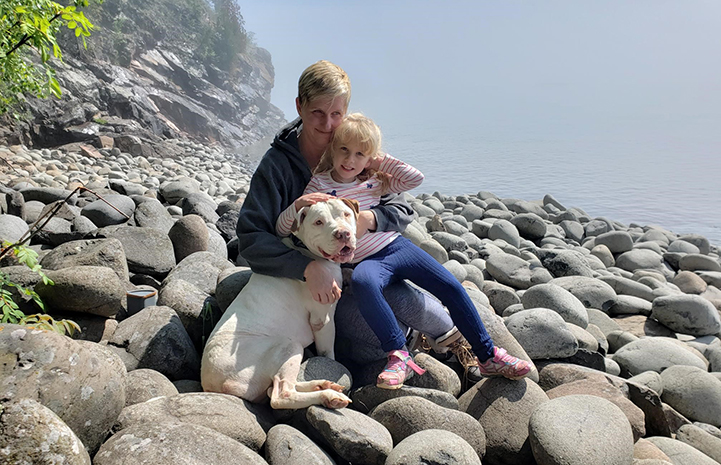