Last year, Major Kimberly Burbrink of the Louisville Metro Police Department (LMPD) noticed that some of her fellow police officers had the workplace blues. “No one calls the police because they are having a good day,” says Kimberly. “Back then, the climate was very contentious toward law enforcement, and I could tell it was having an effect on officer morale.”

Kimberly wanted to find a way to cheer them up. Then she remembered that Ozzy Gibson, executive director of Louisville Metro Animal Services (LMAS), is a retired LMPD colonel and she had an idea: What if dogs from the shelter could accompany police officers on their beat?

“I thought maybe the dogs would lower stress, anxiety and help with depression in the police department, and that it could also be a win for the dogs to get them out of the shelter and give them more public exposure to be adopted sooner,” she says.

Ozzy thought it was a brilliant idea and put her in touch with Stephanie Jackson, foster coordinator at LMAS, a Best Friends Network partner. Stephanie had already spearheaded a short-term foster and field trip program for LMAS dogs. The program was inspired by an apprenticeship program sponsored by Maddie’s Fund®,  and by the innovative, highly successful foster programs at Austin Pets Alive and Austin Animal Center.

Stephanie thought a program with the LMPD seemed like the perfect addition to the field trip program, which helps dogs get out the of shelter for outings and short stays, such as weekends at a volunteer’s home.

Together, Stephanie and Kimberly created Paws on Patrol. “This is another way to give some of our long-term dog residents the chance to get out of the shelter,” says Stephanie.

Take a dog named Bella, for example. She had been in the shelter for more than 100 days, which was about 99 days more than was comfortable for her, and she made this clear to everyone she met. What Bella needed was a chance to get out of the shelter to show potential adopters the happy dog she really is. 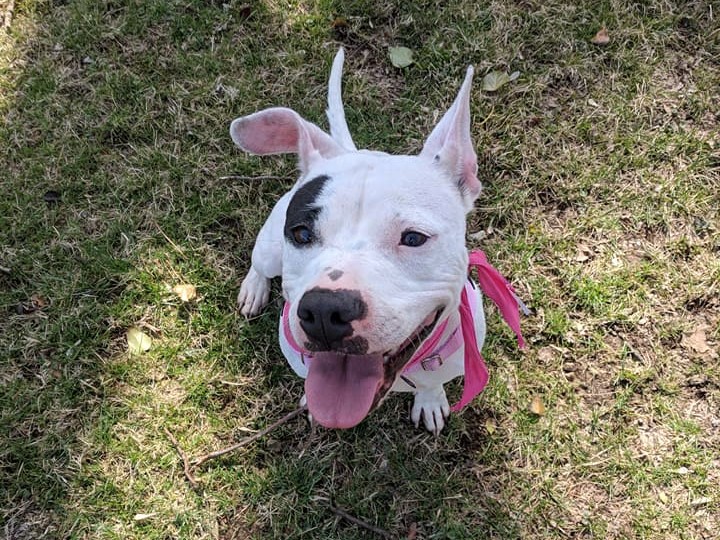 Bella was the first dog to take part in the Paws on Patrol program. Assigned to a partner police officer, she hopped in the patrol car for her first time on the job with the enthusiasm of a rookie cop.

Bella loved working the beat and as soon as she and her partner hit the streets, the coffee shop or wherever the shift took them, her unhappiness disappeared, while her positive attitude was infectious. The officer enjoyed working alongside Bella, too, and citizens loved meeting Bella and learning all about her.

“The program has helped law enforcement and the community to have positive interactions,” says Kimberly. “It’s amazing the information that is shared when citizens and police officers talk to each other.” 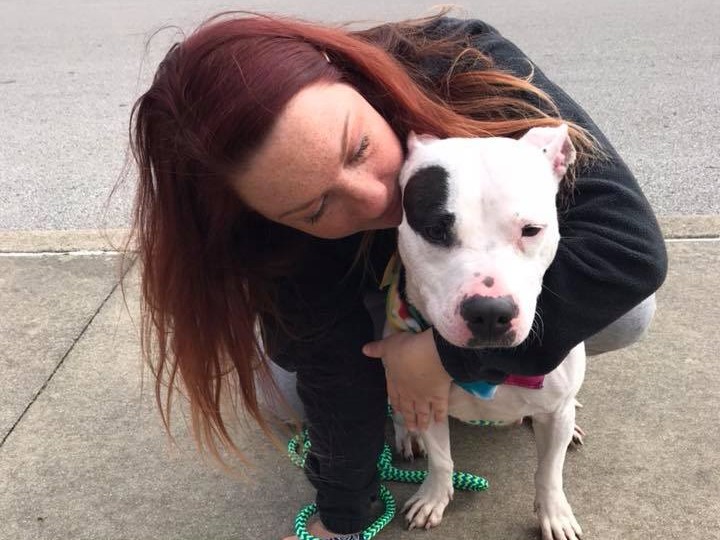 LMAS has a history of innovative outreach programs that bring awareness to shelter pets and help them get adopted. For example, one of its first community outreach initiatives brought adoptable dogs on a “wellness outing” from the shelter to a large healthcare company, so employees could unwind at lunch and socialize with the dogs.

“They are always thinking outside the box,” says Michelle Logan, national shelter outreach senior manager for Best Friends. “And it’s this innovative way of thinking and programs like Paws on Patrol that are going to help us reach our no-kill 2025 goal.” 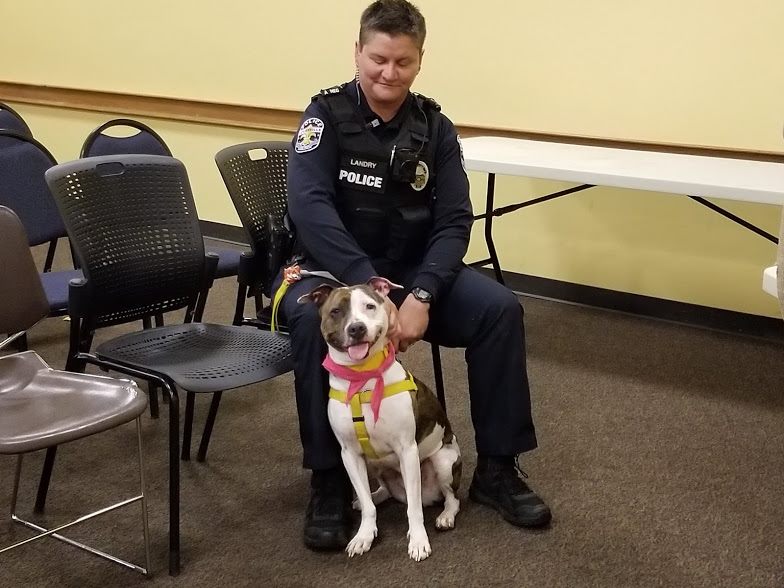 A program that helps pups and people

Since Paws on Patrol began earlier this year, the benefits have been far-reaching. It’s helped the dogs develop skills that they can put to good use in a home, such as understanding and obeying commands, how to walk well on a leash, and how to stay calm while meeting new dogs and people.

Likewise, there also are big benefits for the officers who take part in the program. Police work can be intense, dark and negative, says Kimberly. But when the dogs from Paws on Patrol walk into the precinct, everything changes.

“The dogs come in with tails wagging and tongues hanging, and the next thing you know these tough men and women are taking licks to the face and speaking baby talk,” she says. “It’s really hard to be in a bad mood when a puppy is licking your face.”

That’s the power of dogs for you.

“The program has really revolutionized the patrol experience and redefined the partnership between the Louisville Metro Police Department and Louisville Metro Animal Services,” says Kimberly. “Our hope is obviously for every dog we take on patrol to get adopted, but the benefits gained through shared experiences between the officer and the pup are unmeasurable.” 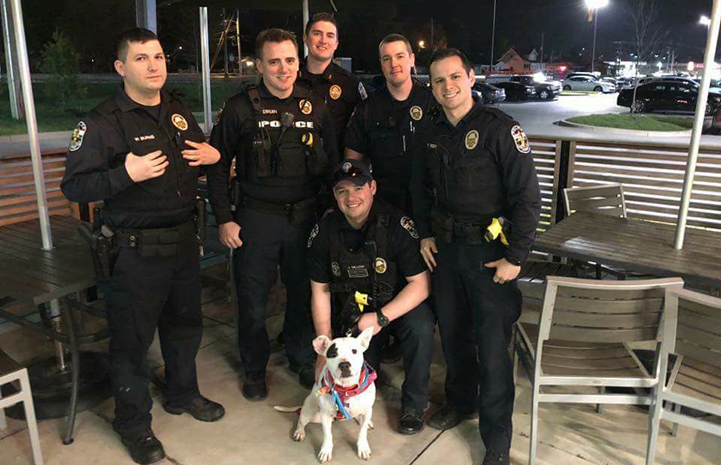 Bella, the first dog who got to walk the beat with Paws on Patrol, found lots of benefits from the program. Not only did she find a way to socialize with lots of new friends, she also found a home. One day while visiting a hospital, an employee met Bella, who saw how kind she was with the patients, and decided to adopt her.

“Bella really needed an opportunity to be seen outside of the shelter,” says Stephanie. “Paws on Patrol gave her that chance.” 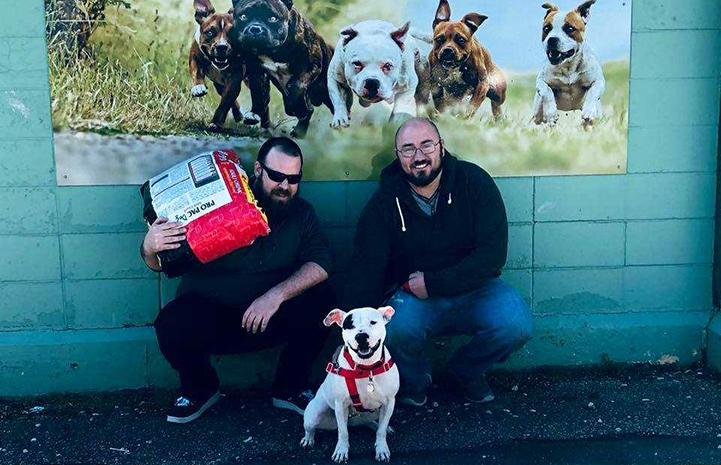