Image
When Itty Bitty came to Best Friends, he was timid and tentative until a foster family with a cat showed him that life is nothing to be afraid of.
By Nicole Hamilton

When Itty Bitty arrived at Best Friends in Utah, the team took one look at him hiding in the back of his kennel and knew they had a pretty big conundrum on their hands. No one ― regardless of how gently they approached Itty Bitty ― could get him to feel less afraid. When treats didn’t help, the team knew they had some problem-solving to do.

“While he never really hissed or swatted us, he was very shy and shut down,” says Danielle Barnhart, coordinator of lifesaving outcomes, who breathed a sigh relief when Christina and Alex Quinn stepped up to foster. Danielle knew that there was a better chance that Itty Bitty would be feel less afraid in a foster home.

It wasn’t easy, though. At first, he was so scared around Christina and Alex that he hid as if he were trying to become invisible. Eventually, they knew they needed backup. So, they called in the boss ― namely, Bagheera, who knew better than anyone how to help little Itty Bitty because Bagheera is a cat, too.

[2020: A record breaking year for Best Friends in Utah] 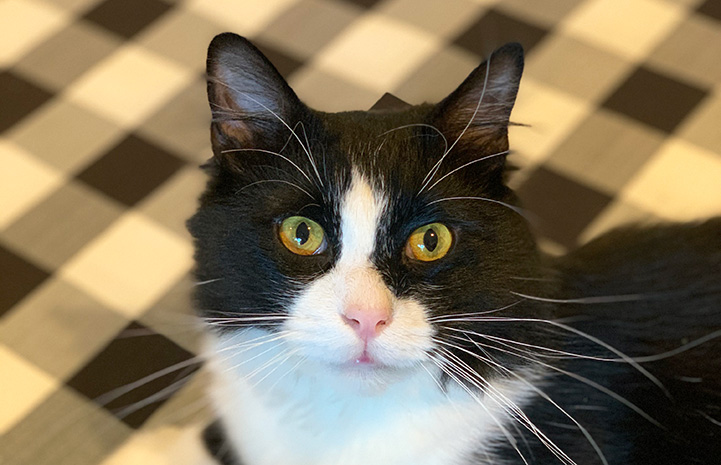 Prior to Itty Bitty, Christina and Alex Quinn had only fostered kittens. But when they learned about him, they liked the idea of helping a timid cat regain his confidence. Plus, they could offer him two things he needed most of all: space and patience.

They set Itty Bitty up in their office and popped in every day to see if he’d come out from wherever he was hiding. But after some time passed, it was clear that their plan just wasn’t working.

“Nothing seemed to entice him to come out of hiding,” says Christina. “Treats and toys were left untouched. He usually retracted himself to our desk's filing cabinet and wasn't very pleased when we opened it to see how he was doing.”

That’s when the Best Friends team suggested it was time to call in an expert, so Alex and Christina enlisted Bagheera’s help. The hope was that, if Itty Bitty saw how much another cat trusted Christina and Alex, maybe he’d trust them, too.

The plan worked. “He emerged to first interact with our easygoing cat, and later offered up his head to be rubbed,” says Christina. “Still, progress was slow, but the steady stream of daily interactions with us and Bagheera seemed to help quite a bit.”

Little by little, Itty Bitty became confident enough to emerge from hiding whenever Christina would walk in the room. And when he hit it off one day with a dog visiting with Christina’s sister, it was clear that he’d turned a corner.

Not long after that, Christina and Itty Bitty hopped on a virtual meet-and-greet with members of the Knight family, who were looking specifically for a cat who is good with dogs. When Christina said with confidence that Itty Bitty fit the bill, they adopted him. As it turns out, he’s not just great with dogs, but with toddlers, too. 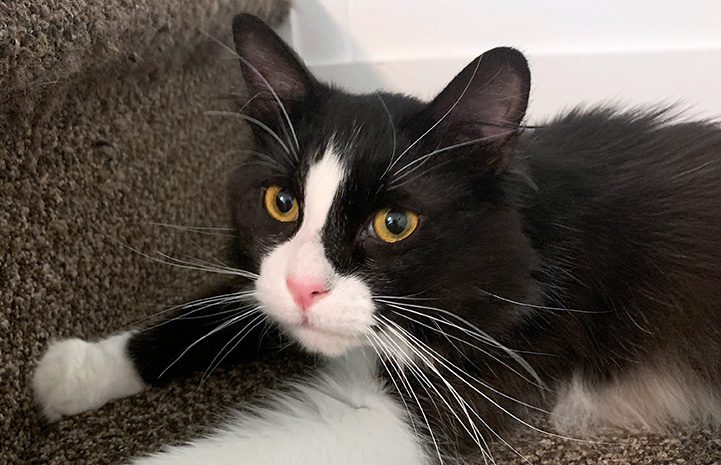 Talk about a total transformation: Now, every morning Itty Bitty waits for Emily to wake up and open the blinds in the living room so he can climb the cat tree and look out the window. The only thing he enjoys more is following Emily and her husband around the house.

“We think of Itty Bitty as a half cat, half dog at this point,” says Emily. “He greets us at the door, follows us even into the bathroom if he can squeeze in, and thinks he can go outside with us when we leave. And whenever my husband sits, he is on his lap ready to be petted.”

Itty Bitty is also incredibly gentle with their young son, who isn’t shy about showing his affection. Whenever he wants to play or hug him, Itty Bitty will patiently let him. They even sleep together at night.

“People are amazed at how calm he is,” says Emily, noting some exceptions, like when he’s hungry. That’s when he’s apt to make it known by “talking” to them until he’s fed. That’s a far cry from his early days at Best Friends, when the team heard nary a peep.

When Christina and Alex learned Itty Bitty had transformed into a feline social butterfly, they were over the moon. “He turned out to be one of the most wonderful cats we have ever had the pleasure of fostering,” says Christina. “It brings us such (feelings of) personal accomplishment and happiness to know he found a forever home where he is so loved.”

That’s the power of foster families (and one sweet cat mentor) for you. 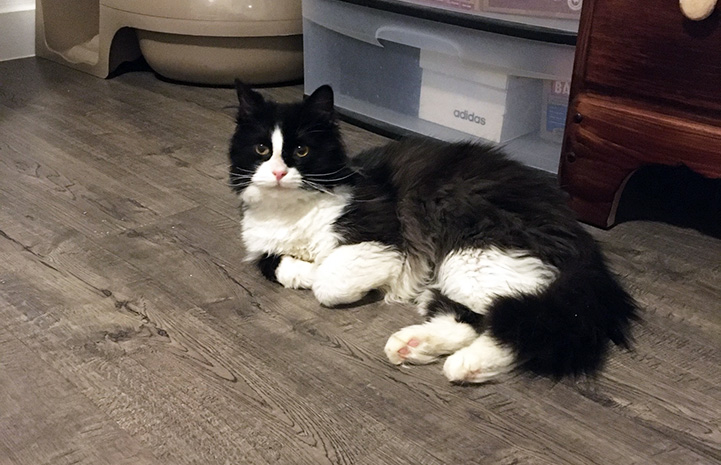 Welcome the new year with a new friend

Ten ways you can help save dogs and cats in 2020