When Dorien Butter's apartment caught fire, she made sure her foster cat made it to safety.
By Nicole Hamilton

Dorien Butter was sound asleep when she was awakened by a neighbor pounding on her door. The apartment building was on fire and she needed to get out immediately. She moved swiftly, gathering what she needed with only one thing on her mind ―  saving Velvet, the cat she was fostering from Best Friends in Salt Lake City.

Dorien knew it wouldn’t be easy. It had taken weeks for Velvet to feel confident enough to leave the closet because he was too shy to come out. Now, in the midst of a fire, Velvet was undoubtedly very scared and hiding again.

Dorien flipped cushions trying to find him, but the smoke permeating the apartment clouded her vision, and it didn’t help that Velvet’s fur is dark grey. With the smoke getting thicker and the sound of fire trucks growing louder, Dorien was running out of time. She’d have to leave without Velvet and as she finally made her way outside to safety, all she could think about was the cat she had grown to love so much and couldn’t save.

[Lesson from a cat: Hearts are made for love]

Overwrought with worry, Dorien approached a firefighter and told him about Velvet. And then after minutes that seemed like eternity, someone told her about a cat at one of the fire trucks. It was Velvet. The fireman had gone in to rescue him, even locating his crate, where he was now safe and sound. 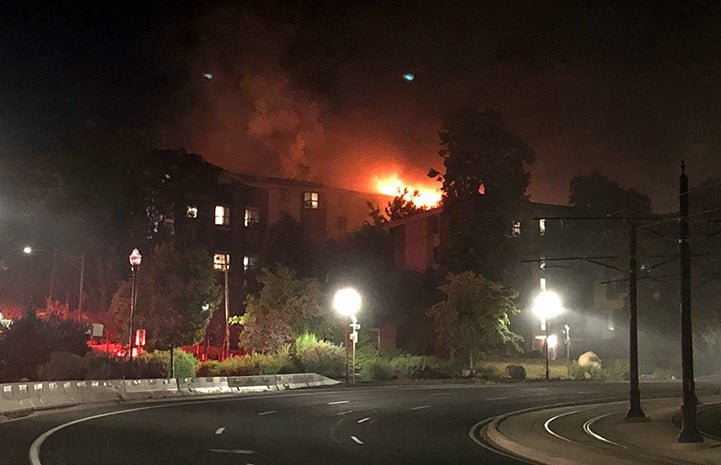 Helping a cat after a fire

It took more than one hundred firefighters to put out the blaze at Dorien’s apartment building that night. Thankfully, no one was seriously injured and all the pets in the building were either evacuated by their people or rescued by firefighters. Since it was early morning, Velvet and Dorien went to rest at a friend’s home until the Best Friends Lifesaving Center opened and the cat could be examined by the medical team.

Thankfully, Velvet showed no signs of smoke inhalation or other medical issues. That was the good news. The not-so-good news was that Dorien had lost her apartment in the fire and Velvet would have to stay at the center until the team could find him a new foster home.

At the same time, Dorien’s commitment to helping Velvet couldn’t end when tragedy struck. Instead, she resolved to visit Velvet as often as she could until he was adopted or went to a new foster home. After all, she had made such progress with Velvet and wanted to make sure that nothing ― not even a terrible fire ― slowed things down. 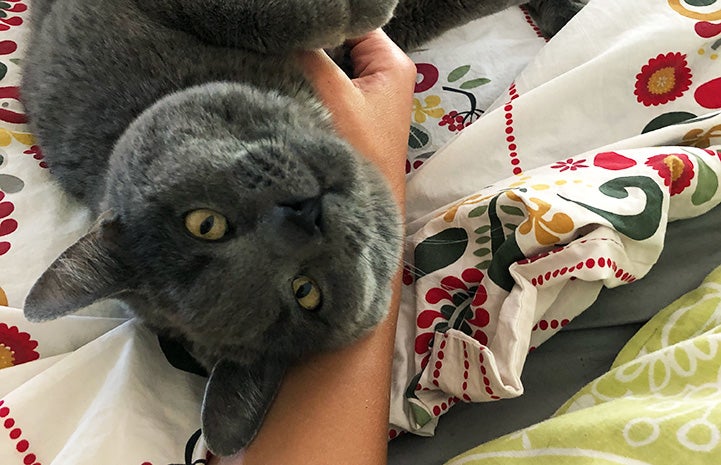 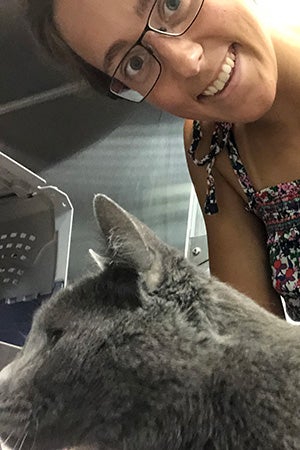 At Dorien’s place, Velvet had all the time he needed to build enough trust to let her get close enough to pet him. She sat near him for hours watching movies on her laptop to help him get used to her.

“For the first two and a half weeks he was really shy and would only appear for a few minutes,” says Dorien, who used treats to eventually coax him out of the closet or  out from under the bed.

By the time the fire struck, Velvet was comfortable enough to venture out of his hiding spots most of the time, often meowing at Dorien when he needed to tell her something or purring as she petted him. After the fire, she wondered if he’d be afraid of her when she visited him at the center. And though it took Velvet a few minutes on that first visit, he eventually rolled over on his back, happy to be reunited with his familiar friend.

“Everyone thought it was so nice that I came back to see Velvet,” says Dorien. “But what they may not have realized was that it was for me, too.” In fact, Doren returned to the center at least three times to see Velvet while he was there, and her visits encouraged him to continue building the confidence he found while staying with her.

“I was concerned that Velvet would quickly revert to his old self, but he remained surprisingly relaxed,” says Danielle Barnhart, Best Friends lifesaving outcomes coordinator in Salt Lake City. “I think that once he learned to trust Dorien, he realized he could trust us, too.”

Dorien wishes she could continue to foster Velvet, but it gives her peace of mind knowing that he was able to move into another foster home where he’s doing great. The shock of surviving a fire could have been enough to set Velvet back. Instead, Dorien’s dedication not only saved his life, but the time she spent with him forever changed his life for the better. 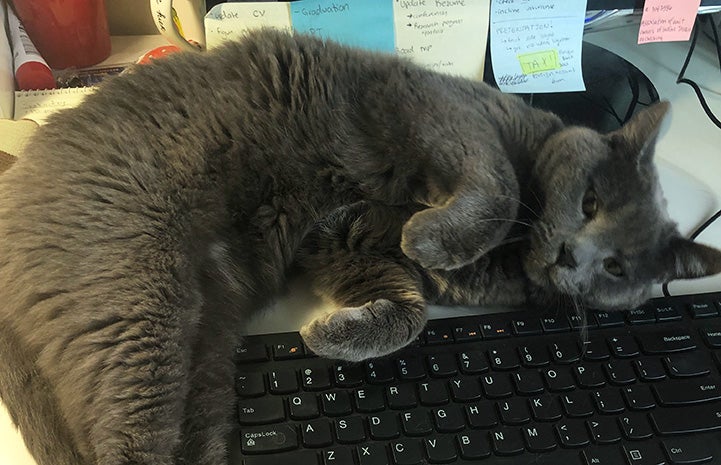 Be a pet foster hero

Shelters everywhere are full of pets like Velvet who need a second chance. You can save lives by fostering even for a day or two.

Foster a cat or dog near you

Photos by Beth Henry and courtesy of Dorien Butter