Image
When a dog named Tammy arrived at the Sanctuary scared and shut down, a formerly shy dog named Todd was there to comfort her.
By Sarah Thornton

The world can be an intimidating place, especially for a dog who hasn’t experienced much of it. And when humans also seem scary, it sometimes takes a more familiar-looking friend to lead the way. Other more confident dogs are often the best at helping a shy dog get comfortable with things, as well as learn that there’s really not that much to be scared of.

When Todd arrived at Best Friends Animal Sanctuary, he was scared of a lot of things, including people. But with his caregivers’ help (and plenty of treats), he quickly gained confidence. And then when Tammy arrived, completely shut down and hiding in a corner, it was his turn to help her out of her shell. 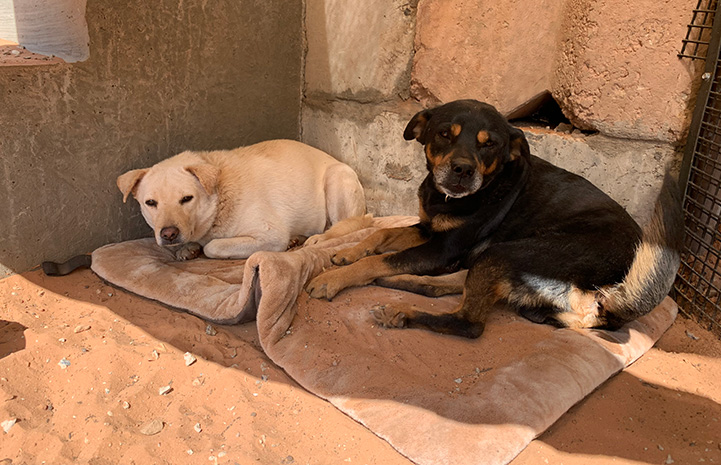 Getting comfortable with time and cheese

Todd had spent some time at a shelter where the environment overwhelmed him — too much going on all at once. He didn’t want to go on walks or get attention from people. He would accept treats, but once they were eaten he’d quickly run away. Because he was so anxious and scared, the shelter staff felt a quick adoption probably wasn’t going to happen. But at the Sanctuary, he and other dogs like him would get their best chance.

[This dog was once afraid of men, but now he’s man’s best friend]

Todd moved into a kitchen space at Dogtown, where caregivers could spend time with him in a more relaxed setting. He had a big, comfortable bed and plenty of delightfully squeaky toys to play with. With music playing in the background to help him relax (Bob Marley, an audience favorite), caregivers fed him treats throughout the day in an attempt to win him over.

“It took no time at all for Todd to start getting full body wiggles and big tail-wags when he saw us,” says caregiver Megan Boemeke. “Within a week he was repeatedly coming up to us and nudging us to pet him.”

Todd was a super-affectionate dog, it turned out. He enjoyed getting scratched all over, going for walks and simply spending time with people. He just needed a chance to get comfortable. And when another new dog named Tammy arrived, in need of a lot more than just time and treats to feel at ease, Todd was there to lend a helping paw. 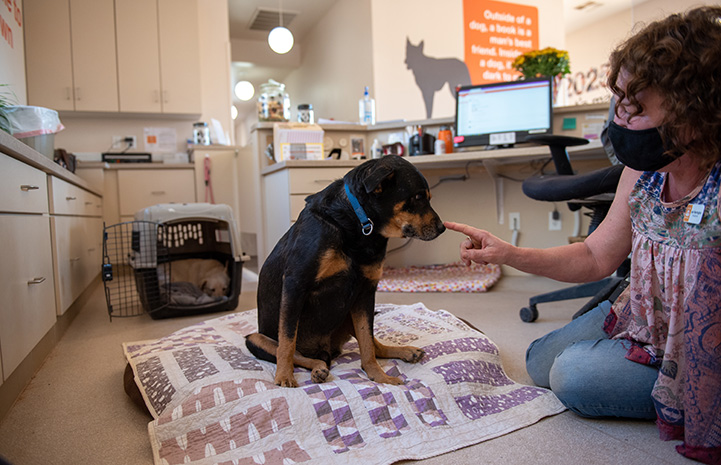 Tammy had lived most of her life outdoors without much human contact at a home with lots of other dogs. Suddenly being so close to humans in an unfamiliar place scared her, and it caused her to shut down, hide in a corner and stay in one spot.

It was summertime and very hot, but Tammy wouldn’t move, even to eat or drink. Because the spot she picked was very sunny and she started to get dehydrated, caregivers moved her into the kitchen. That meant she’d be closer to people and possibly more scared, but her overall health was their main concern. 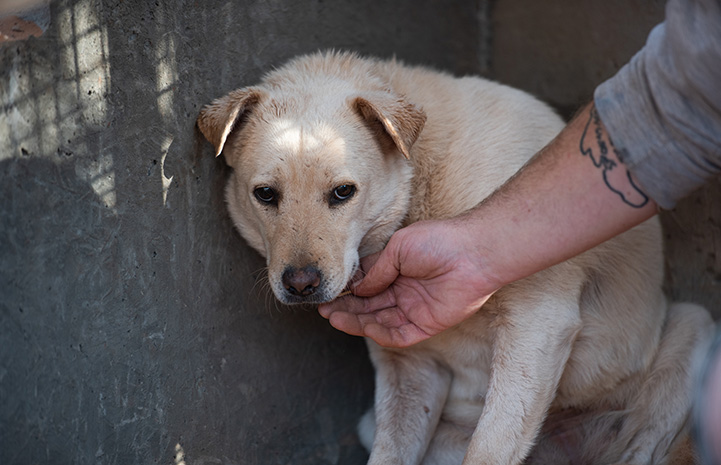 Todd would lie down, snuggle with Tammy and happily accept human attention for both of them. Tammy could watch the interactions without having to be take part; however, she did take her own cheesy treats (no sense in missing out just because a two-legged giant gave them to her).

Whenever it was Todd’s turn to hang out at the Dogtown front desk, Tammy went with him. And though she preferred to stay in the relative privacy of a kennel, each day she watched him play with new people. She started getting more comfortable and even enjoyed their regular visits to the front desk. (It did mean more treats, after all.) Slowly and with Todd’s help, she started coming out of her shell. 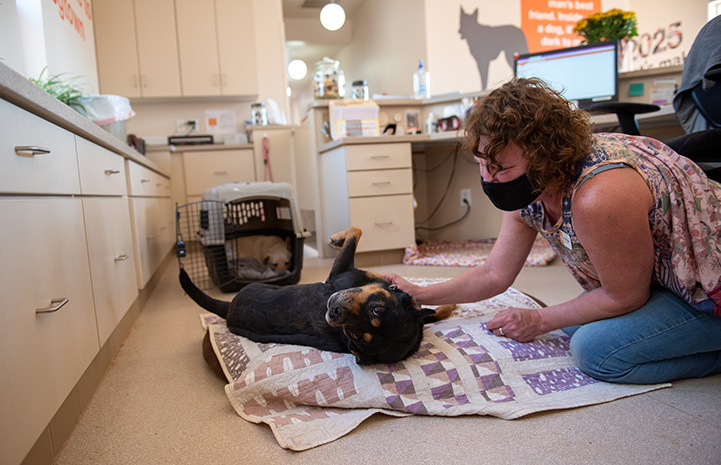 When Todd needed to go through heartworm treatment (a condition he’d arrived with), he had to move into an isolated area. The treatment requires dogs to have their activity restricted for a while (no roughhousing allowed). Without him, Tammy wasn’t as comfortable in the kitchen, so she was moved back to a room with its own yard. That made her more confident. She no longer hid in a corner refusing to budge, and she even ran along the fence and barked at caregivers when they arrived in the morning.

When she thought no one was around to see her, Tammy rolled and played quite happily in her yard. Some shy puppies moved in with her and it didn’t take long for them to go into foster homes. Then another adult dog arrived to keep her company. Todd was still her best friend, though, and they got to see each other on walks.

Tammy isn’t a fan of being attached to a harness and leash, but she does love stroller rides. “We just wheel the stroller into her room,” says Megan, “and she’ll jump in.”

When Todd came up to join her for their walk-and-ride, Megan says his delight was obvious. “He’s always so happy to see her (that) he gets super wiggly and excited. It’s awesome.”

Having Todd around to help comfort Tammy and show her that people aren’t so scary has expanded her world. Her once-shy friend has taught her all the important things: how treats are great, how stroller rides are relaxing and how it’s OK to roll in the sand and let your tail wag.

There’s still a lot for Tammy to learn about life with humans, but now that she’s been adopted she has her chance. And so does Todd. They’ve each found wonderful families, and this year they’ll be home for the holidays. 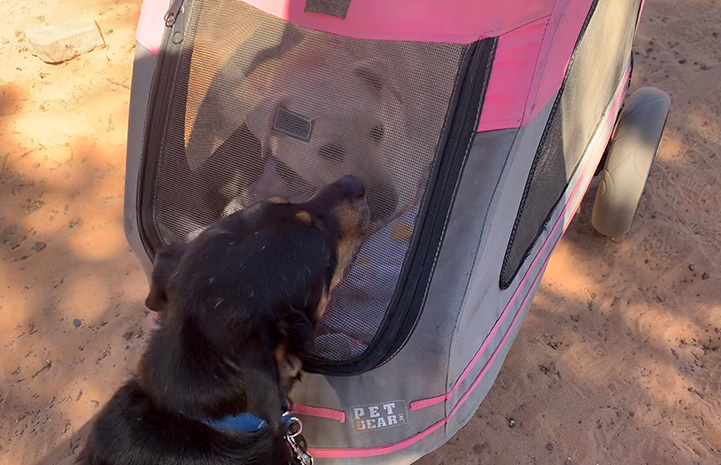 Shy or outgoing, homeless pets are just waiting for a place to call home and someone to be their friend.