Image
Abandoned skinny, scrawny, malnourished kittens who were dropped off at the Animal Foundation in Nevada come to Best Friends kitten nursery for help.
By Christelle L. Del Prete

​Like most of the kittens arriving at the Best Friends kitten nursery in Kanab, Utah, Wisdom, Agent, Puzzle, Secret and Scout didn’t yet have names. They didn’t have their mother with them either, so they had to rely on people to bottle-feed them. But there was something else: Although their itty-bitty teeth were in and they were about four weeks old, they were so malnourished and dehydrated that their weight was only that of kittens two weeks old. They needed help fast if they were to survive and have the chance for adoption into loving homes.

The five kittens — dubbed Litter Seven because they were the seventh litter to arrive in Kanab this season — were originally found by a Las Vegas resident. The good Samaritan brought the abandoned litter to The Animal Foundation (TAF), Nevada’s largest animal shelter. But, like the majority of shelters in the U.S., TAF didn’t have the resources to provide intensive 24-hour care to newborn kittens, the most fragile of animals entering shelters.

Too young to take care of themselves, weeks away from being old enough for adoption, and extremely susceptible to disease, neonate kittens like Wisdom, Agent, Puzzle, Secret and Scout are especially at risk of dying in shelters ― especially when they arrive undernourished and undersized.

Lucky for Litter Seven, TAF is a Best Friends No More Homeless Pets Network partner and therefore was able to get them out of the shelter and into a kitten nursery where they can get the necessary round-the-clock care.

Wisdom, Agent, Puzzle, Secret and Scout arrived in Kanab during the second week of April and the Best Friends staff and volunteers immediately got to work. The kittens were skin and bones ― their little bodies disproportionate to their big heads. They looked like cartoon characters, or teeny tiny bobble-headed babies, says community cat coordinator Janna Kruse.

The five siblings needed to get critical nutrition so that they could catch up developmentally to their four-week-old counterparts. 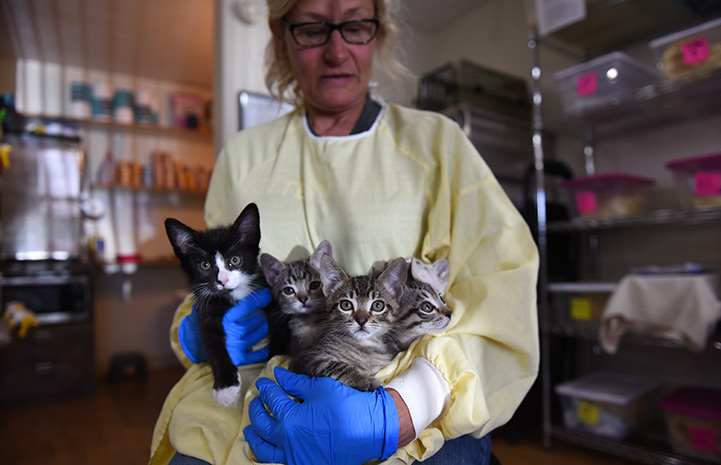 For the next seven weeks, the kittens did exactly that. They ate like champs and became snuggly, curious and playful, just like the other kittens in the nursery. That doesn’t mean they didn’t struggle a bit from time to time. They all came down with fevers, but fluids helped with the dehydration and fevers, and syringe feedings helped them during weaning when they were figuring out how to eat on their own.

Most of all, the kittens received constant care, and lots of love and attention. As they gained weight and felt better with each passing day, they turned into feisty little kittens who wrestled and tumbled around with each other all day. When they were strong and healthy enough and after being vaccinated, they went home with Janna, who agreed to foster them. 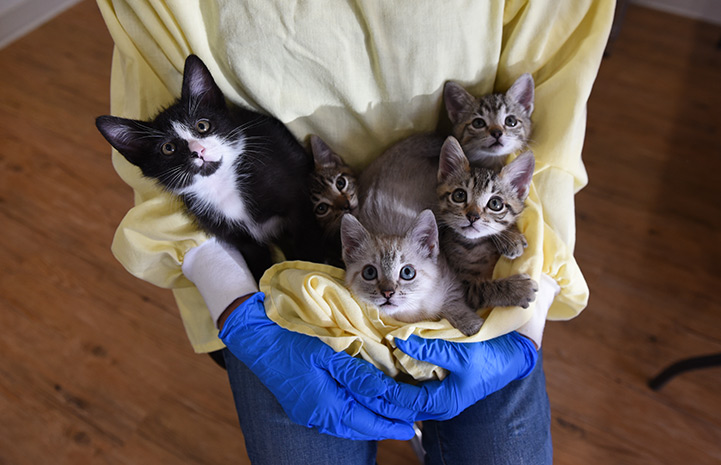 From foster home to forever homes

Not only did that open up more space in the nursery for other kittens needing lifesaving care, but it also gave the Litter Seven kittens their first taste of what a real home is like. By then, they weren’t just healthy. They were thriving.

“By the time they got to my house you would never have known they struggled,” says Janna. “They played, purred and pigged out just like kittens should. They even enjoyed the company of my dog — a 40-pound pit bull terrier.”

Wisdom, Agent, Puzzle, Secret and Scout were spunky, full of life and finally growing quickly, as kittens tend to do. It was time for them to move on and find homes of their own. So, a little more than two months after they’d arrived at the Best Friends kitten nursery, they moved again. This time, they got a ride to another Best Friends No More Homeless Pets Network partner in Oregon. From there, they soon began their lives as beloved pets. 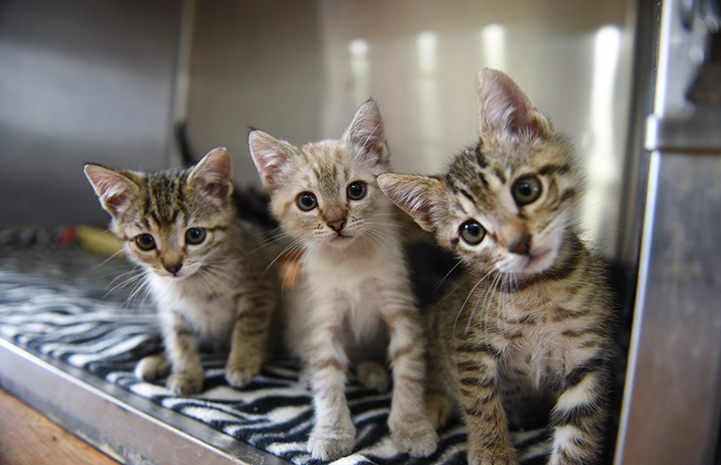