From street life to the good life: How a blind kitty found his way home

Image
Cat had microphthalmia (his eyeballs were smaller than normal), and he was in pain, so had surgery to remove his eyes. He's been adopted and is happy.
By Nicole Hamilton 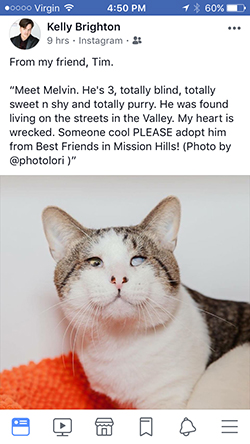 It was through Facebook that Jackie Gudgel first learned about Melvin, a blind cat at the Best Friends Pet Adoption and Spay/Neuter Center in Los Angeles. “I thought he was the cutest cat,” says Jackie, who showed Melvin’s photo to her boyfriend Ellison, who concurred. Melvin was pretty cute.

The tabby-and-white cat had lost his home and ended up at Los Angeles Animal Services, and from there he was taken to Best Friends. Veterinarians at the center determined that Melvin had microphthalmia, a condition in which the eyeball is smaller than normal. His vision was either limited or nonexistent. He was also likely in pain, and surgery to remove both eyes would make him feel a lot better.

Before Melvin’s surgery, Jackie couldn’t stop thinking about the blind cat, so she went to the adoption center to meet him. He was just as adorable in person as he was in in his photos. But it would be a while before he’d be ready to go to a home. Jackie and Ellison decided to take some time to imagine life with Melvin before making the decision to adopt him.

Meanwhile, Melvin had surgery to remove his eyes, and afterward, Samantha Bell DiGenova, cat behavior and enrichment lead at the center, brought him to her home so he could rest and heal in foster care.

It took Melvin a few days to get used to Samantha’s place, but he’s a smart guy and soon he had the lay of the land. “He was unsure of everything, but he welcomed my help with purrs and lots of rubbing on me to be petted,” says Samantha. “I’d pick him up and set him on my lap at night, and he'd purr and fall asleep on me. And then I'd get out a toy and he'd go crazy.”

At first, Samantha kept Melvin in the guest room so that he wasn’t overwhelmed by learning the layout of several rooms. She would sit with him for hours before and after work, coaxing him toward the food area and then toward the litter box so he could map it all out.

Once Melvin started feeling confident, he began exploring the house using his whiskers and senses of hearing, smell and touch to figure things out. “He'd hear and smell the other cats outside his door and walk toward them,” says Samantha, who also has a deaf cat. “I could see his ears and whiskers working overtime to compensate for the lack of sight.”

When she introduced the two of them, they sat there for a few moments and then curled up and went to sleep next to each other. ”It warmed my heart to see these two sweet cats, each missing an important sense, happy and thriving,” she says.

After watching Melvin find his stride through the photos shared on Samantha’s Instagram page, Jackie contacted Samantha and set up a time to meet Melvin. Turns out, she’d never given up her plan to adopt him. “When I saw him again there was the same expressiveness in his face,” she says. “The surgery didn’t change that much about him, and it didn’t change anything for me either. He was as cute as ever.”

And with that, the blind cat had found his forever home with Jackie and Ellison. 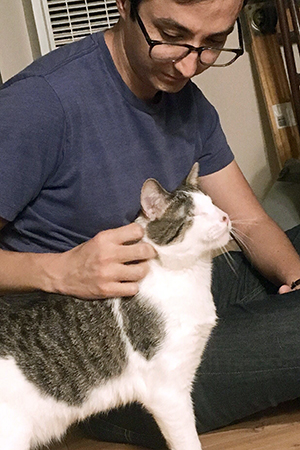 Just like he did at Samantha’s place, Melvin started off exploring small areas in his new home with Jackie and Ellison. “He made a perimeter around rooms and figured everything out from there,” says Jackie. “You can see him scanning for smells and sounds. He’s a very sensitive guy.”

Melvin is very playful these days, enjoys his toys and now he even has his own Instagram page. “He looks different, but when you watch him you can tell he isn’t that different at all,” says Jackie. “When I first saw Melvin and learned about his eyes, I thought he’d be fine. And I was right. He’s not at all lazy. In fact, he’s really inquisitive.”

Being blind hasn’t stopped Melvin one bit. If anything, it’s been inspiring to watch him embrace life. 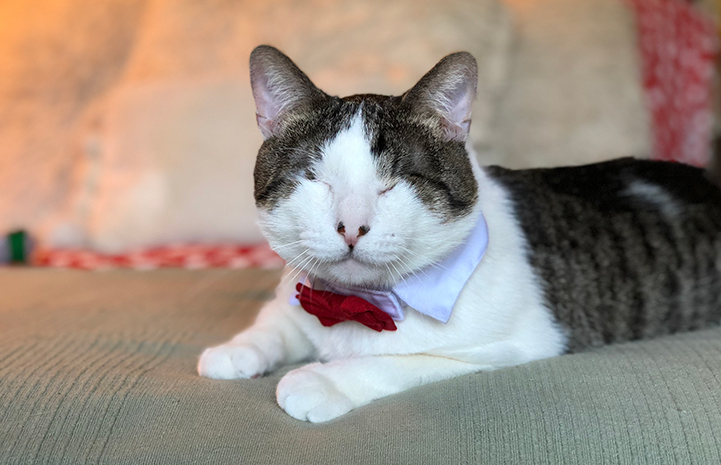