Image
Even with the best care possible, Zeke was having a tough time in a shelter environment, but then he was adopted and it changed his life forever.
By Tara McKenney 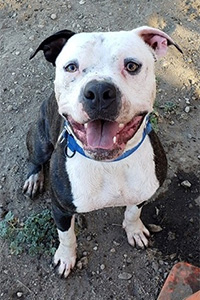 Nanami Bombassei and her teenage son, Tony, started volunteering last year at the Best Friends Lifesaving Center in Los Angeles after their dog passed away. Nanami was feeling an emptiness in both her heart and home, which led to redirecting her loss by helping other dogs in need.

Nanami was scheduled for a cleaning shift at the center when she first met Zeke, a three-year old pit bull terrier mix with one black ear, one white ear and an exceptionally high energy level. In fact, Zeke had so much energy that it sometimes took two people to curb his enthusiasm enough so that he could be leashed up for a walk.

When Nanami met Zeke, he had been at the center for several months after losing his home and ending up at Los Angeles Animal Services. Let’s just say that by then, Zeke’s zest for life was difficult to contain in a shelter environment. Best Friends staff and volunteers used everything at their disposal to keep Zeke content, including walks, play groups, playtime in the kiddie pool, toys, training and agility lessons. While it all helped Zeke somewhat, he never truly relaxed.

He’d bounce off the walls ― jumping up and down one moment and then completely shutting down the next. When out on a walk, he was easily startled. And when that happened he tended to get anxious and overexcited, causing him to sometimes jump all over people, become mouthy and grab their clothes. The poor guy was struggling.

Making the best life for Zeke

Amanda Yocom, dog behavior specialist, says Zeke required a slow approach and a brief period of relationship-building with new people. He also needed a handling and training plan. Soon, staff members discovered that Zeke loved three things: peanut butter, toys and other dogs. They also noticed that alongside the right dog, Zeke absolutely blossomed. He seemed to be a lady’s man and preferred female dogs with a softer energy who could give him space when needed, but also engage in the chase-run play that he enjoyed.

Nanami’s heart went out to Zeke, so she began to spend more time with him. Having mastered the art of puppy dog eyes, Zeke would further endear himself to her by pushing up against his gate to show his eagerness for attention and affection. Once his space was cleaned, he watched Nanami and Tony clean other dogs’ rooms nearby. And then after her volunteer shifts, Nanami would visit Zeke and give him treats.

It all made life a bit better for Zeke, but everyone knew what he needed most was a home. 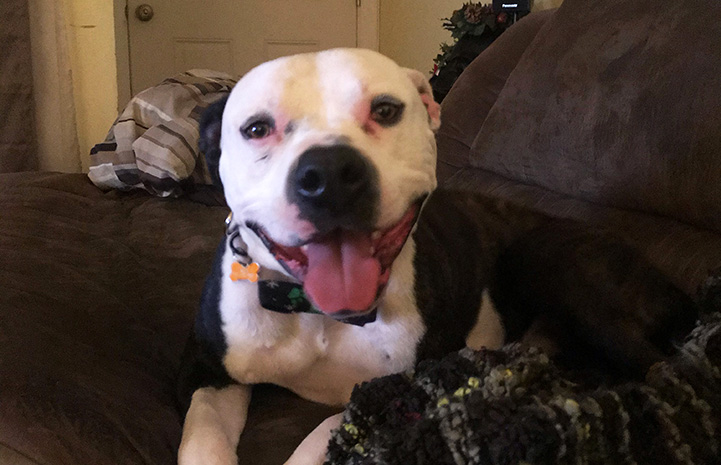 Nanami thought about Zeke all the time, even when she wasn’t volunteering at the center. So, she made a decision: She would try bringing him home. Amanda was pleased to see that Nanami and Tony had taken a shine to Zeke, who had no in-home experience while in Best Friends’ care, and no one knew what to expect.

Amanda set up several training sessions for Zeke that included Nanami, Tony and his best friend, a frequent visitor to the house. The goal was to help Zeke feel secure and comfortable with everyone in a familiar environment before going to a new place.

Stressed dogs can break away from people if they get scared in a new space, so it was critical that everyone be able to handle Zeke during one of his jumping and mouthing episodes. To everyone’s relief, during each of the training sessions Zeke warmed up quickly to Nanami and Tony and was always on his best behavior. He was ready. 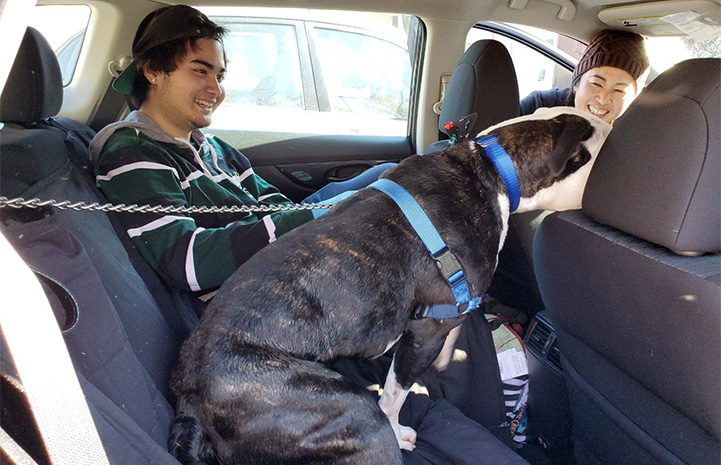 Feeling as prepared as possible, they took Zeke home for two weeks. From the moment he stepped inside their house, Nanami says he was happier and more relaxed than at any time since arriving at the L.A. shelter. “Zeke was super loving and his whole personality changed as soon as he arrived.”

Another pleasant surprise: They saw that Zeke was already housebroken. His only real hiccup was struggling to walk polished wood floors, so they put down yoga mats and rugs to help improve his footing. 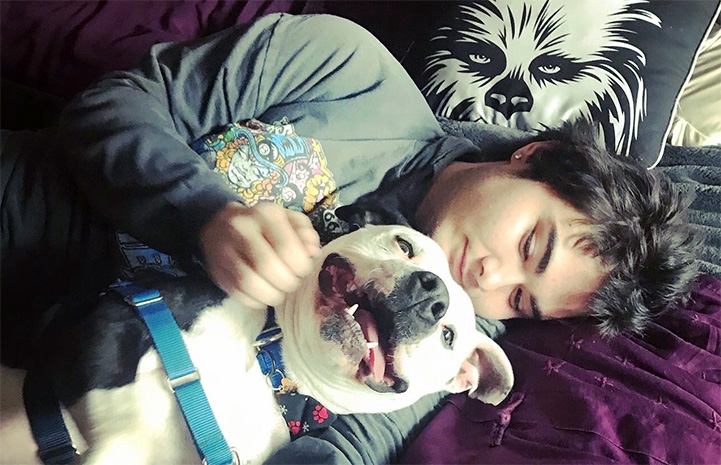 Zeke’s story is a case for giving dogs a chance

During his foster time, it became obvious to Nanami and Tony that they couldn’t bring Zeke back. Instead, they adopted him and made him a permanent part of their family.

Now that Zeke has acclimated to his new home, he goes for hikes and long walks, but following exercise and playtime he turns into a couch potato. This balance allows him to remain calm and content, except when he’s hungry and literally “complains” for his food.

Zeke can now be found at home chewing on and playing with toys, especially tug-of-war with a rope. Tony and Zeke have become more than best buddies. They are like brothers, and Tony’s friends often stop by to hang out with Zeke.

Even though the stark difference between Zeke in a shelter setting versus a home is not unusual, dogs struggling with anxiety in a shelter are still overlooked by prospective adopters. “A lot of dogs are overwhelmed in a shelter setting and often do not show their true colors,” says Amanda. “They may be distracted and not give you attention, hide in their cubbies or bark, which can cause people to keep walking. It affects each dog differently.” 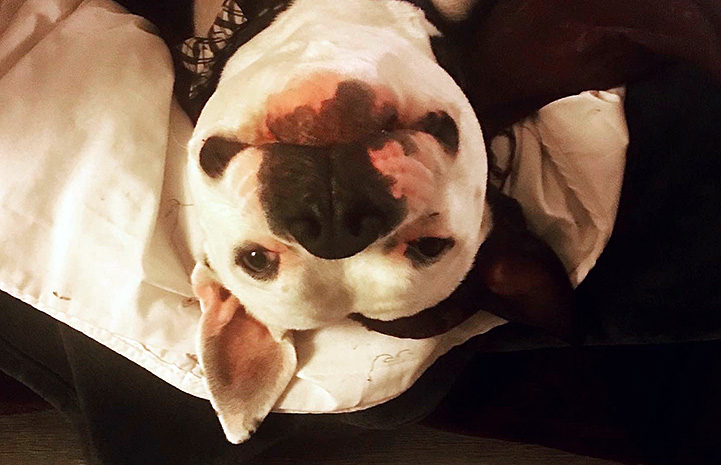 Amanda says prospective adopters looking for a new best friend should always take time finding an appropriate match, ask lots of questions and, if necessary, arrange for training assistance before bringing the dog home. “Go into your search open-minded and willing to help a dog who may require a little work,” she says.

When given a chance to be in a loving home and adapt to a routine, a dog’s true personality can blossom. Just ask Zeke. Meanwhile, Amanda says, “Getting photo updates with Zeke's big smile is a nice reminder why we do what we do.” 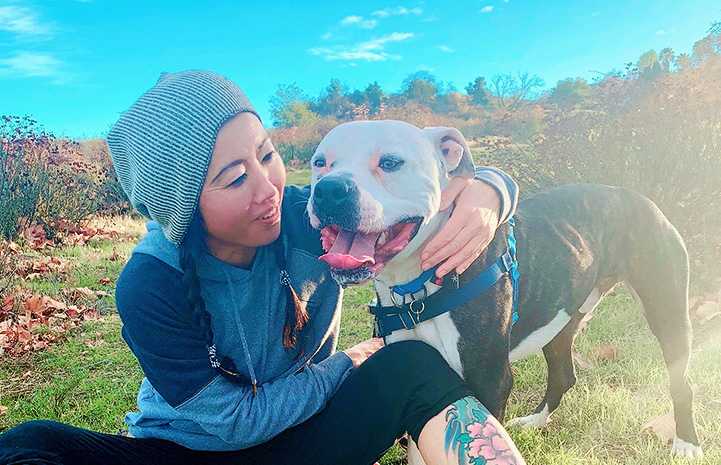