Image
St. Clair, the shy cat, spent most of her time hiding until she met Alesha Davidson and got comfortable enough to hop up on the bed during a sleepover.
By Sarah Thornton 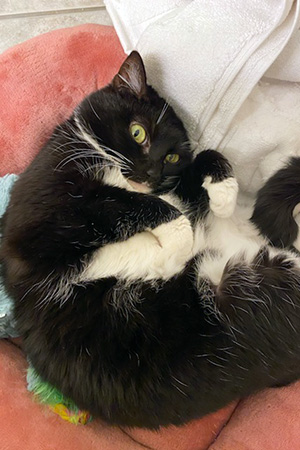 There’s something special about watching a shy pet finally start to open up. Every moment is another potential milestone and each interaction is something to celebrate. It’s easy to fall in love with a timid, fluffy little friend who shows that she trusts you. So, when a shy cat named St. Clair quickly warmed up to Alesha Davidson, there wasn’t much question about whether the two would be going home together.

Little moments with a shy cat

Alesha had plenty of feline experience from her time working with a Best Friends community cat program, so when she heard that Cat World at the Sanctuary was looking for a few extra hands at the end of the year, she was ready to help. With bags packed for two weeks, she drove seven hours to the Sanctuary outside of Kanab, Utah. She was prepared to feed, mop and do plenty of dishes. What she wasn’t expecting was to quickly fall for a shy little tuxedo cat who rarely came out of hiding.

When St. Clair arrived at the Sanctuary from the Cat Adoption Team, a Best Friends Network partner organization in Sherwood, Oregon, she was scared. Everything was new and different, and when she found a safe place to hide, she made it hers. She would venture out briefly to explore, but when she saw someone coming, she ran right back to her hidey-hole.

It took a while for her to be comfortable with her caregivers in the room, but eventually she began to enjoy some petting. Still, according to caregiver Lauren Ross, it wasn’t until Alesha arrived that the bashful cat really came out of her shell. “It was as if she was never a shy cat at all,” Lauren says. “The two hit it off right away.”

“There was just something about her,” says Alesha, remembering her first time meeting St. Clair. “Her cute little face and just the fact that she was hanging out on that little cat tower … I just kind of got attached to her.”

During her first week at the Sanctuary, Alesha spent all of her spare time with St. Clair. When cleaning was done, it was St. Clair time: quietly sitting together, getting comfortable and getting acquainted. The second week, with a little encouraging, Alesha decided to take her new feline friend on a sleepover. 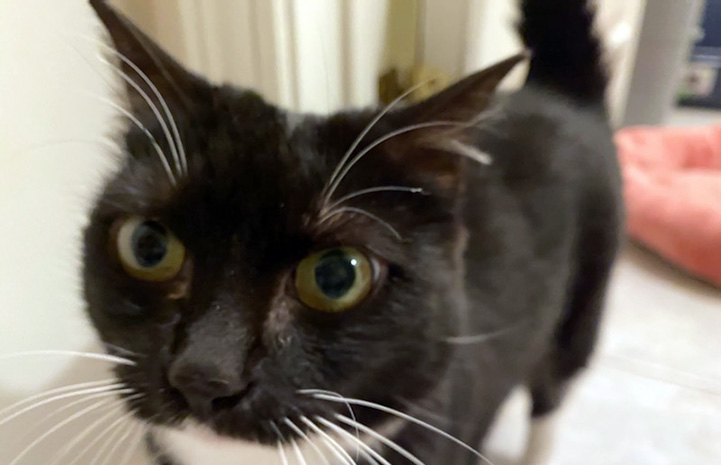 “I thought, if nothing else, we (would) learn how she does in that kind of an environment,” Alesha says. “Because sometimes, you know, they might be shy in a room full of cats but might open up alone in a hotel room with a single person.” At the sleepover hotel, St. Clair spent some time checking herself out in the mirror and giving the room a once-over, but then she hid under the bed the whole night.

With one more night until Alesha returned home, she tried again. This time, she started small by sitting with St. Clair in the bathroom to get her comfortable and spend more time together. Apparently, it was exactly what the cat needed, because soon she was purring full-force and rubbing happily against Alesha.

When they were back out in the room, St. Clair again hid under the bed. That was disappointing, but it wasn’t over yet. A brief interaction the next morning finally cemented everything: St. Clair was going home with Alesha.

“It’s such a small thing,” Alesha remembers, “but it was kind of a big deal to me … When I was right about to get up for work, I felt her jump up onto the bed. And I was just so shocked, and I just lay there so still for a second because I was like: ‘Is that her? She’s not done this. What is she doing?’”

The morning alarm startled St. Clair back off the bed, but Alesha says the decision had been made. “I couldn’t leave her behind, after that. I knew that there was just something about her. I don’t really know what it was, but she just had my heart.”

Settling in at home, one step at a time 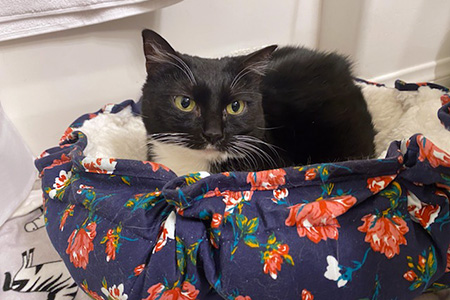 When Alesha returned home with St. Clair, her boyfriend, Jon, was waiting with a bag of their new family member’s favorite treats. They set up a cozy room for her to get started in, and before too long, the once-shy cat was getting comfortable with the rest of the humans in the house.

“We’re encouraging her to come out and eat in the hallway,” Alesha says, “and we’re spending a lot of individual time with her just to get her to warm up to people. She’ll eat treats out of our hands, now. The other night she crawled into my lap for the first time since we’ve had her.”

Jon’s two-year-old daughter, Hailey, is also joining in with St. Clair’s socialization. Already good with Alesha’s other two cats, Hailey is learning to go slowly and gently with St. Clair, and all the extra attention is doing a world of good.

[Retired professor on a mission to help shy cats]

In her new home, St. Clair is finally finding her voice ― literally. What used to be a small, broken meow has gotten stronger and stronger as she gets more comfortable and more vocal. And Alesha says it’s especially apparent when it’s time for food.

“When it’s dinner time, she knows,” says Alesha with a laugh. “It’s my favorite time of the day to just go in there and put her food down, because I know that she’s gonna be sitting right in her little spot waiting for me, and she’s gonna let me know she’s ready.”

St. Clair still has a way to go when it comes to her two new feline siblings, especially after one got a little too curious in the first couple of days But she’s gaining confidence every day. Alesha, Jon and Hailey are there for her, giving her both the one-on-one attention and quiet companionship that she needs.

“I’m still getting to know her, too, and learning what she likes,” says Alesha. “We’ll get there.” For Alesha, every bit of progress is more rewarding than the last. And for St. Clair, the timid little tuxedo cat, there is no more reason to hide. 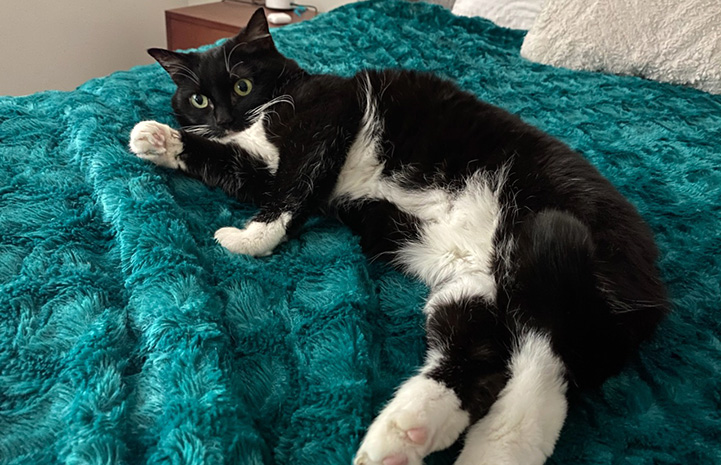 No matter whether they are shy or outgoing, adopting a homeless pet will change lives ― theirs and yours, too.