Utah or bust: How a dog found happiness in Salt Lake City after Hurricane Harvey

Image
Hurricane Harvey rescue story about a dog saved after the storm and adopted by a patient couple who understands the trauma he has been through.
By Nicole Hamilton

A lot has changed for Mulligan, a dog who was found wandering alone in Houston after Hurricane Harvey. Today, he lives in Salt Lake City with a family that is helping him put those difficult days in Texas behind him. It isn’t always easy, but now every time Mulligan runs to the front door to greet his family, he’s learning that the storm is finally over.

Mulligan ended up at Best Friends’ base of operations for Harvey relief after someone found him trying his best to stay alive on the flooded streets of Houston. During his first days at the center, he barked at any dog nearby.

Out on walks, however, Mulligan channeled his energy into exploring the great outdoors. Kate Litaker, an adoption specialist at the Best Friends Pet Adoption Center in Salt Lake City, met Mulligan in Houston and when they went walking she got to know another side of him. “One evening, I sat outside on the ground with him and he cuddled in my lap,” says Kate. “He was so affectionate and happy.” While he put on quite a show around other dogs, there was another side to his personality.

On the road to happiness 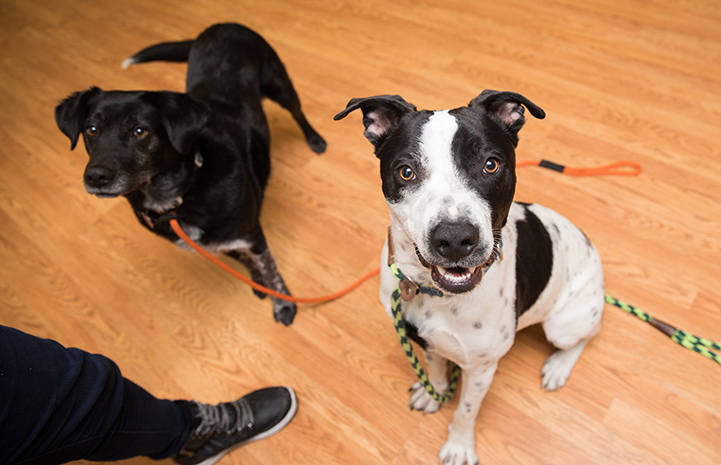 Mulligan, like all the lost or abandoned animals brought to the center, was held with the hope that his family could be found. But when September turned to October, the team began making plans to transfer Mulligan (along with some fellow dogs from the center) to the adoption center in Salt Lake City, where he could find a new home.

Soon after he arrived in Salt Lake City, Mulligan went to live in with a foster family. That’s where he got used to living in a home again, thanks to the family’s golden retriever showing him the ropes.

Eventually the dog from the Lone Star State started settling into life in the mountains.  His barking ceased, but his enthusiasm for life remained. And that’s just what a young couple, introduced to Mulligan at the adoption center, loved about him. They knew it would still take some time before Mulligan could really put the past behind him, but that was a road they were ready to walk with him.

Samantha and Matt had recently moved from Scranton, Pennsylvania, to Salt Lake City, where Samantha is studying for her doctorate in child psychology. With her demanding studies and Matt’s career, adopting a dog wasn’t a wise option at first, but by the time they moved to Salt Lake City and celebrated their five-year anniversary, they were ready.

Center adoption specialist Sammi Nelson had a dog in mind for Samantha and Matt. He had lots of energy and would be a perfect companion for the hikes they loved to take. It was Mulligan. And after Samantha and Matt spent some time with him, they knew Sammi was right. That day, they left with Mulligan — excited for the next chapter with their new dog. 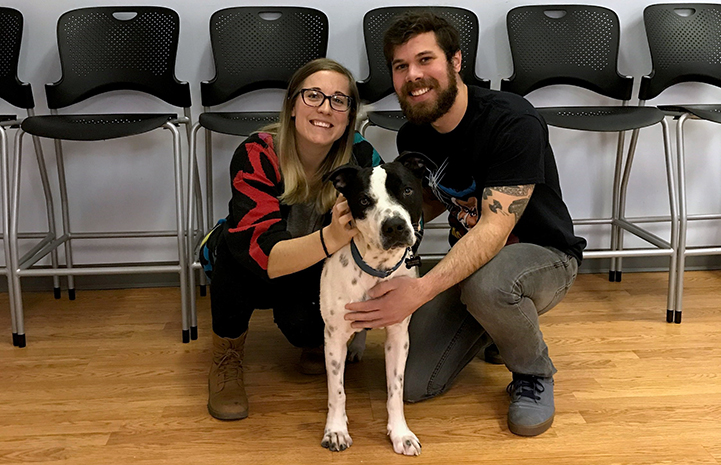 “He was attached to us in about two hours,” says Samantha. “He sleeps right next to us and through the night.”

When Mulligan arrived at his new home, he had to learn what to do with the nervous energy that he sometimes showed on walks. At first, he was also very territorial and protective of Samantha and Matt, especially around other dogs. Luckily, Mulligan was able to draw from the lessons learned in his foster home and began to relax.

He’s also found a patient family that understands his challenges. Since Samantha is a child therapist, she approaches Mulligan’s situation in the same way she approaches children who have experienced trauma.

“He’s been through a lot and we know there are going to be triggers,” says Samantha. “Loud noises, for example, are physically painful for him. Dogs are smart, and they react the same way people do — internalizing things in their bodies.”

When Mulligan hears a loud noise, he gets nervous. “That’s when his heart will start to race,” says Samantha. During these moments, Samantha and Matt stay calm, and when Mulligan sees there’s no danger, his fear subsides. 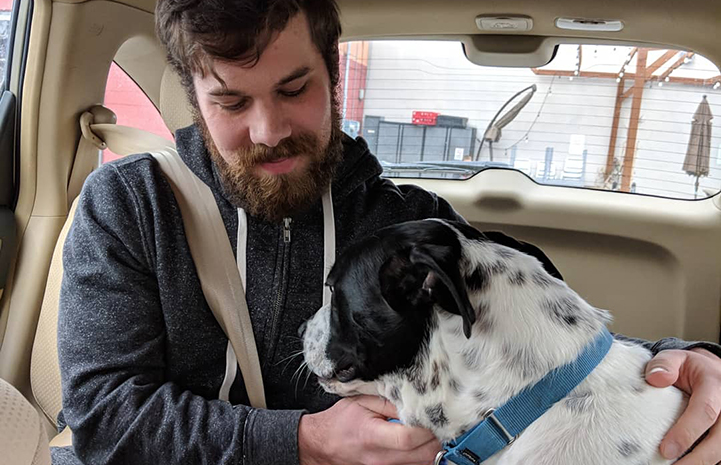 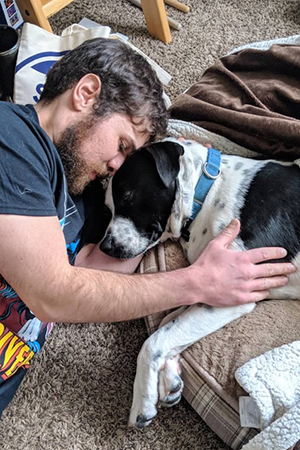 Staff members set up training sessions at the center for Mulligan and Samantha, and they have helped Mulligan learn new skills, so he can enjoy life without being afraid. And every walk is a chance for Mulligan to learn. If he can sit calmly at a crosswalk, he gets a treat.

Mulligan has taught Samantha and Matt some new things, too. “Matt and I have learned how to compromise and communicate more,” says Samantha. “With Mulligan, we have to be on the same page.”

Both Samantha and Matt admit that it’s hard to leave Mulligan every morning. And they can’t wait to come home at night to play with him. As soon as they turn the key in the door, they can hear Mulligan on the other side, waiting to give them a big kiss — so happy to have found his new family.