Image
During 'The One' Valentine's Day pet adoption promotion, dogs and cats can be adopted for $14 from Best Friends and our Network partners.
By Kelli Harmon

How do you know when you’ve found the perfect pet for you? Maybe it’s the way her ears flop just so, or the way he reaches out with his paws asking you to please keep rubbing his belly. That’s what happened for the Kop family last February when they met Steve-O, a tabby cat in New York who had the whole family smitten from the moment they met him.

Valentine’s Day deals (on pets) from coast to coast

The Kops met Steve-O during last year’s Best Friends Valentine’s Day adoption promotion, “The One.” That’s how Steve-O and 2,093 other pets across the country found love and new homes. And this Valentine’s Day, Best Friends and Hallmark Channel want to help you find “The One,” — the perfect pet to fill your days with unconditional love.

From February 1-15 through The One promotion, pets can be adopted for just $14 from Best Friends Animal Sanctuary, Best Friends pet adoption centers in Utah, New York and Los Angeles, as well as more than 200 participating No More Homeless Pets Network partners* across the country. Right now, staff and volunteers are preparing to make love connections between people and pets, just like they did last year for a special tabby cat and some hardworking kids in New York.

Hoping to find “The One” 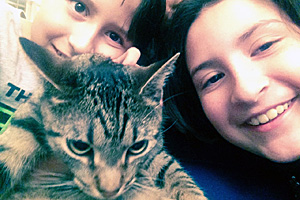 ​Jenni Kop and her kids Kiki and Jack are no strangers to saving lives. A year and a half ago, when the family found two kittens in a box in a dumpster, they took them home to nurse them back to health. The family kept both kittens, under the impression that one was male and one was female, and gave them the adorable names of Butter and Scotch.

But they got a surprise when they brought the kittens to the vet and learned that they actually had two girls. And well, the family had really gotten used to the idea of having a male cat in the house. “We love our girls,” says Jenni, “but Jack really wanted a boy cat.”

After a bit of research, Jenni learned about the upcoming Best Friends 2015 adoption promotion “The One,” featuring reduced adoption fees. And that led to her giving Kiki and Jack the perfect assignment: they would earn the funds to adopt their next cat. She gave the kids a list of chores to do and the amount they could earn if they did them.

Thrilled at the prospect of bringing home a new pet, the kids did their tasks around the house, earning each dollar as they counted down the days until the special event. By the time the big day came, they’d each earned just enough to pool their dollars to adopt a cat at the Best Friends event.

The big day for one cat 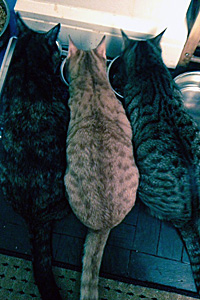 Once they arrived at the adoption venue, the family carefully considered each cat—all of whom Best Friends had taken in from New York Animal Care Centers to help them find homes. But it was a wide-eyed tabby cat named Steven who piqued their interest the most. Jenni says, “My son was the first one to pet him and it was love at first pet.”

Steven purred loudly and rolled over so they could all pet him. When Jack went to pull his hand away, Steven stuck his paw out and held Jack’s hand there. That was the moment they all fell for him, and he became the one. The kids turned over their hard-earned dollars and it was official. Steven was going home.

In the year since he went home, Steve-O has settled in and truly become part of the family. Jack and Kiki couldn’t be happier with their new cat, and he’s great with his feline sisters, too.

The Kops also found out that Steve-O’s first birthday was two weeks before they adopted him. They loved that they gave him the best birthday gift ever — a home.

Find “The One” for you this February.