It was VIP all the way: Very Important Pets, that is. Leading the way at the third annual Strut Your Mutt in New York City was Vicktory dog Cherry, a rescued beagle named Juno, and a puppy mill survivor named Sassi.

All three VIPs were able to go on to better lives because of Best Friends, but there are thousands of VIPs out there who will be delighting new adoptive families because of the funds raised via Strut Your Mutt, sponsored by Petco Foundation, Natural Balance, Glaceau Water, Petfinder.com, Halo, Freekibble, Time Warner Cable and the New York Post.

More than 20 of our No More Homeless Pets Network partners participated in New York’s Strut Your Mutt to raise money for their groups in an engaging and fun way. 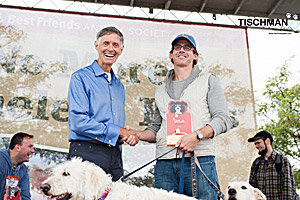 Hooray for Dr. Andrew Kaplan of the Toby Project

In fact, as of October 2, the Strut Your Mutt in New York City raised over $269,000 to help homeless pets. (If you want to contribute, there’s still time. You can donate until October 6.) That amount breaks out to more than $200,000 for the animal organizations of the tri-state area and $65,000 for Best Friends. The original goal was to raise a quarter of a million dollars for animals in need, and the strutters helped us exceed that. The top individual fundraiser was Dr. Andrew Kaplan of the Toby Project, which won the award for top Network partner fundraiser. Andrew raised $30,000 toward the $70,000 that made his organization the day’s biggest winner. Of course, all the organizations that participated in this year’s Strut Your Mutt are winners.

Hurricane is a prime example of a homeless pet helped by funds raised during Strut Your Mutt. This black dog, who came from a South Carolina shelter, was dehydrated and looking much worse for wear. His worst afflictions were not detectable by the naked eye; he was also heartworm-positive. His time at the shelter was running out. 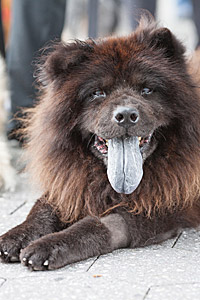 Luckily, Pet Adoption League of New York (PAL) stepped in and rescued Hurricane, whose costly medical treatments were made possible by the funds raised from a previous Strut Your Mutt. PAL has participated in all three of the fundraisers in New York. Since PAL never turns away a dog due to expenses, medical or otherwise, it makes sense that they take full advantage of this fundraising opportunity.

"We deal with some of the toughest cases, dogs who are sick and dumped, dogs who are elderly and discarded. We’re especially compassionate toward the seniors; my heart goes out to them, and we save as many as we can," says Caryl Shulman, president of PAL. By working with Dix Hills Animal Hospital and Farmingville Animal Hospital, PAL is able to take the most disadvantaged animals and turn their lives around.

So, it’s no surprise that PAL has already earmarked the money raised from this year’s Strut Your Mutt. Caryl says, "The money goes out for lifesaving procedures as soon as it comes in. For dogs like Hurricane, who was on an IV for two days in the emergency hospital, and who is now a cherished member of a foster family, Strut Your Mutt [funds] make a huge difference."

A Cherry on top 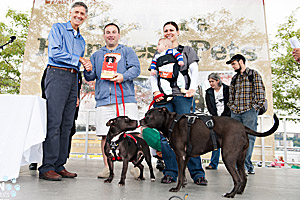 Another Vicktory for Cherry

Cherry, one of the 22 dogs that Best Friends took in from the Michael Vick dogfighting bust, is a showstopper. He’s also the winner of a Golden Mutt Award for being tops at raising money for Best Friends at Strut Your Mutt. Cherry has done so much already for pit bull terriers by breaking stereotypes, but he continues to give back. He proudly strutted as he was raising money and awareness with his family, including his new baby brother, Novellino.

Cherry’s mom, Melissa, said, "We attribute his rehabilitation to Best Friends, and we picked up where Best Friends left off. It is wonderful to be here together with our whole family. And, of course, it feels great to have raised $3,500 for homeless pets." 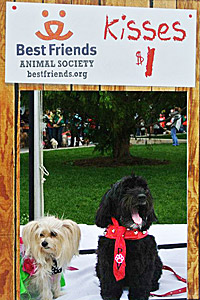 One of the packs strutting in high style was the PawVogue’s Fashionista Team. A group of New Yorkers who are members of PawVogue.com, they raised more than $1,200 for homeless pets. "We are strutting because we want all dogs to have lives as good as our dogs," said Bob Shaughnessy, who was there with his dog Cuba, dressed to the nines in Chien Coature.

Among those sashaying for homeless pets were Ilene Zeins and her dog ZZ, Susan Godwin with her dog Tasha, Leslie Riddle and her dog Puccini, and Mary and Jeff Goodrow with their dog Pebbles, who was the impetus behind shaking their money-makers. "Our dogs are blessed and we want to help dogs less fortunate," enthused Mary. "These dogs are raising money and making memories today."

There were 111 volunteers making sure the event went off like clockwork. Best Friends’ New York City volunteer coordinator Tammy Heeber says, "Our volunteers, as always, were amazing. They do everything, and more, with a smile."

First-time volunteer Laurie Lane drove an hour and a half from Binghamton to be part of the event. "I went to the Sanctuary in Utah," she said, "and that got me thinking about volunteering for Best Friends. I’m having a blast! I love it, and I think it’s great that the organization is helping to spread the message of no-kill across the country and providing much-needed funds."

"There were a lot more people at Strut Your Mutt than last year and we had more participating groups and raised more money. The more we can grow, the more animals we can save. And the volunteers are the cornerstone in how much lifesaving we can accomplish," says Gregory Castle, co-founder and CEO of Best Friends. 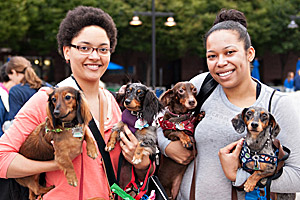 Strut Your Mutt is more than a dog walk and fundraiser. The events offer an assortment of fun and educational stuff, ranging from doggie yoga to agility demos to "Ask the Vet" and "Ask the Trainer" booths. In New York, the day’s activities were especially awesome because of these participants: veterinarian Dr. Carolyn Quagliata, training advice from The Inner Dog, Ruff & Relax by Paul Mitchell Schools, animal communicator Susan J. Squittieri, dog reiki by Jenny Sandbank, doggie massage by Cynthia Okimoto, dog yoga by Crunch, an agility course courtesy of Jeffers Pet, and a doggie kissing booth by the New York Post.

You can make a donation to your favorite No More Homeless Pets Network partner and Best Friends via the Strut Your Mutt website until October 6.