As she came in for work on a winter day, Bobbie Foster, Wild Friends caregiver, didn’t notice the eagle at first. The massive bird blended into the congress of ravens that dotted the branches — black against the fallen snow in the background. Two dozen of them hopped and danced about, without flying away.

What drew her attention was that the ravens remained in the tree. That was unusual behavior. Curious, she took a long look at them. Then she saw him. In the middle of the circle of ravens, on one of the lower branches of the juniper trees, was a spectacular bald eagle.

“He was so amazing and beautiful,” Bobbie recalls. “His feathers were a little ruffled.” 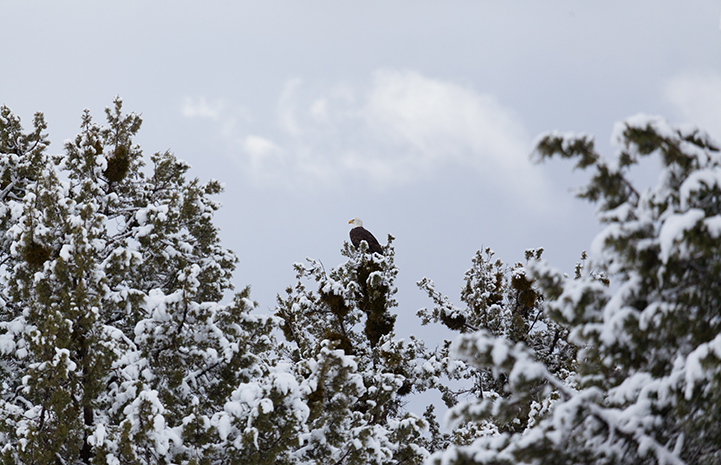 Seemingly unaffected by the presence of all the ravens, the eagle eyed the ground where something had piqued his interest.

Ravens can often mob other birds (even those much larger than they are), and threaten with sheer numbers. Remarkably intelligent with a highly developed social structure, ravens work together with each other as a team.

So, understandably, the bald eagle hesitated by pausing in the lower branches of the tree.

Bobbie was able to watch this wildlife interaction right beside the road, near Wild Friends at the Sanctuary, where Best Friends’ licensed wildlife rehabilitators and staff care for all kinds of animals. She’d seen the bald eagle on other days when she was driving and he was flying.

Many bald eagles spend the winter months at the Sanctuary, from November through February. Then they fly north to have their babies in the spring. In the winter, they are here, but in quite small numbers. So seeing one is always an occasion for wonder.

A privilege to see wild ravens and bald eagle

“It’s such a privilege to see them,” says Bobbi. “What was so amazing to me is that he was so unflappable. He was just living in the moment. I was so excited I couldn’t even use my cell phone.”

She ran to get Troy Snow, another Wild Friends caregiver. “We jumped in his truck. We raced back to the tree, and he was still there.”

During the day, other Best Friends staff went by to see him. At lunch and even later in the afternoon he was still there — unperturbed by his admiring audience.

“It was a whole day of unfolding magic,” Bobbie said. “Here we’re surrounded by positive, wonderful wildlife — all day.”

In the end, it wasn’t clear who won the game of waiting — the bald eagle or the ravens. But they both do well at Best Friends.

By evening, both the ravens and the eagle had flown away — back to their respective perches for the night to rest and then wake up at dawn to resume their lives doing what eagles and ravens do.

They live here in peace, and mostly in harmony. 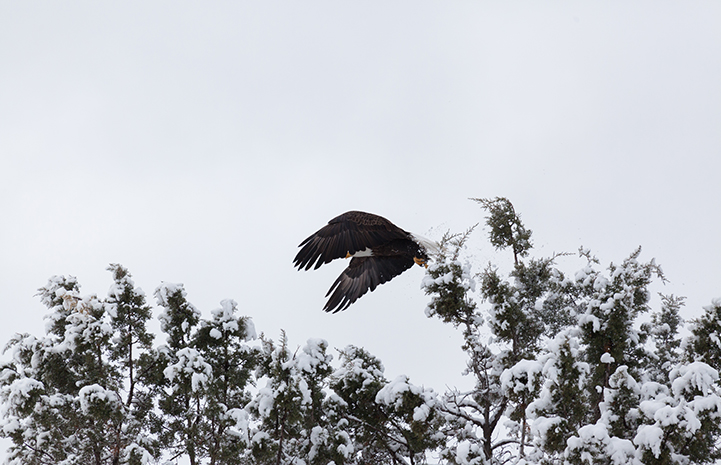 Sharing the land with wildlife

It has always been a basic principle of Best Friends to ensure that the wild places (which are interspersed among the Sanctuary buildings that house rescued domestic animals) are wild and free for the wild creatures who have always been here.

As Carmen Smith, licensed wildlife rehabilitator and manager at Wild Friends says: “Rehabilitating wildlife and releasing them back to the wild is a way of giving back to the land for the impact that we’ve made as humans.”

And making sure that the wild creatures have ample space in which to live and remain undisturbed is a way of acknowledging their presence, their grace and their innocence.