Worth the wait: Two semi-feral dogs finally find the perfect home after 12 years

Image
Two semi-feral dogs, who had been at a rescue for 12 years, are adopted by a woman who has a lonely sheep who needed companionship.
By Lindsay Hutton

The story of Riva and Rianna begins in 2006, when a woman found a mother dog and her puppies living on an old and empty property. She wanted to help the dogs, but with no safe place nearby for them to go, she contacted an organization called Haven of the Ozarks, which agreed to take them in.

She drove more than 100 miles to get them to Haven of the Ozarks, which is dedicated to getting pets adopted and providing a forever home to those who are still waiting. While the mother dog (Runa) was social and sweet, her puppies had spent the first six months of their lives without meeting people. And because they were completely unsocialized and semi-feral, it would be much harder to get them adopted. Runa was soon adopted, but despite efforts by volunteers and staff to socialize her adolescent pups, they remained distant.

As months turned into years, it seemed unlikely that the two shepherd-mix dogs would ever be socialized enough for adoption. Most people who knew them thought that the Haven would likely be their forever home. They were content living a happy life there with all the creature comforts they needed and with people who cared about them (even if they still preferred that people keep their distance).

The Haven is a sanctuary that doesn’t belong to any one town. The 11-acre facility, surrounded by cow pasture and Ozark hill country, is located about 12 miles from the Arkansas state line. It has a Washburn (population 436) mailing address, an Exeter (population 771) phone number, and the closest town nearby is Cassville (population 3,310).

The Haven’s proximity to Cassville changed life forever for both Riva and Rianna. Local resident Kayla Clancy happened to have a single orphan sheep named Lizzie, who was distraught at living alone on Kayla’s 57-acre farm near Cassville. Lizzie cried constantly, and Kayla thought that a dog companion could help her feel safe.

The ideal dog would have to be OK living outside of a home environment and not overly interested in people. Since Kayla had volunteered at the Haven, which is just a few miles from her farm, she went there to see if they might have a dog who’d be a good fit. It turns out that two dogs, residents of the Haven for 12 years, fit the profile.

Though they had never met a sheep before, a volunteer suggested Riva and Rianna, so Kayla went home, picked up Lizzie and brought her to the Haven for a dog-sheep introduction. With the help of the Haven staff, the two dogs cautiously checked out young Lizzie. “They didn’t seem to really mind her,” Kayla said, “so we just decided to go ahead and try it out.”

It worked. Now Riva and Rianna stay with Lizzie and keep her company during the day. At night, they sleep in a straw-padded, teepee-like enclosure constructed by Kayla’s father. It’s situated just on the other side of the fence and is designed to let them go in and out of Lizzie’s territory. Just as they were at the Haven, Riva and Rianna remain tightly bonded and distant from people, but they now take treats from Kayla.

While it might have seemed more appealing to adopt younger dogs or just adopt a single dog, Kayla felt that it was time for Riva and Rianna to be adopted together. “They’d been together for so long,” she says. “I felt as though they shouldn’t be split up.” 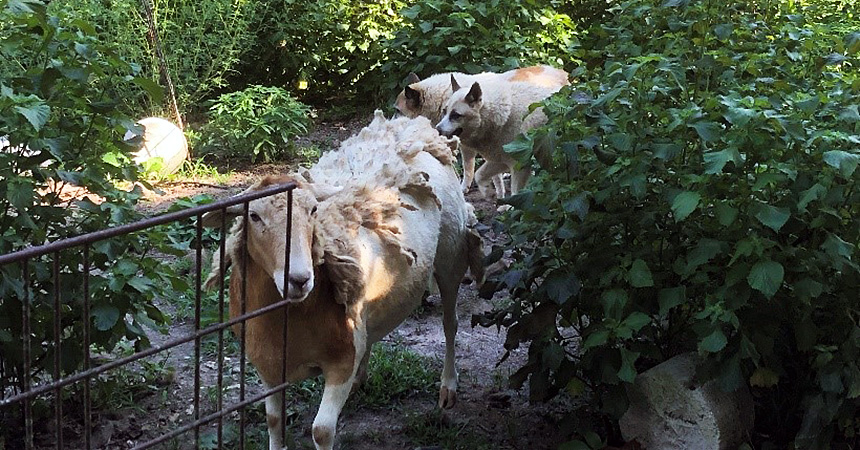 Perfect dog for this sheep on this farm

After 12 years, Riva and Rianna have a home. Of course, no one predicted that they would be chosen for the exact qualities that seemed to make them unadoptable (shyness, the length of time they were at Haven and the fact that they were a pair). But as it turned out, these were the very qualities that made them ideal companions for Lizzie.

Their story is a reminder that one size does not fit all, that all animals are individuals, and that the right fit can be found. Riva and Rianna don’t fit the description of livestock guard dogs, but they are fast friends with Lizzie, live on a farm and are an indispensable part of a unique family: two dogs, a sheep and the people who brought them together.

Find a Best Friend Network partner near you