Image
The Sanctuary recently hosted an event to help both horses and humans step up their training.
By Sarah Thornton

It’s the last day of the two-week colt starting, an event for getting young horses started with their saddle and riding training, and horse trainers and owners have gathered around outside of the Best Friends Horse Haven arena for their final morning briefing. They’ve come from all around the country to work with some of the horses who call the canyon their home-between-homes, under the careful guidance of professional horseman Ryan Rose.

A first for the Sanctuary, the event was designed to set these eight horses up for success after adoption. Of course, not all horses at the Sanctuary can be ridden, often because of special medical needs, and that’s OK, too. They’re great company and loving family members. But for those who are up for it, training and riding are great time for bonding with their human friends.

At the same time, many of the participants are trainers or have their own horses back home, so they are learning valuable skills to help them help even more horses in the future. Everyone has made amazing progress, and four of the horses involved have homes waiting for them. It’s been a win-win for horse and human alike. 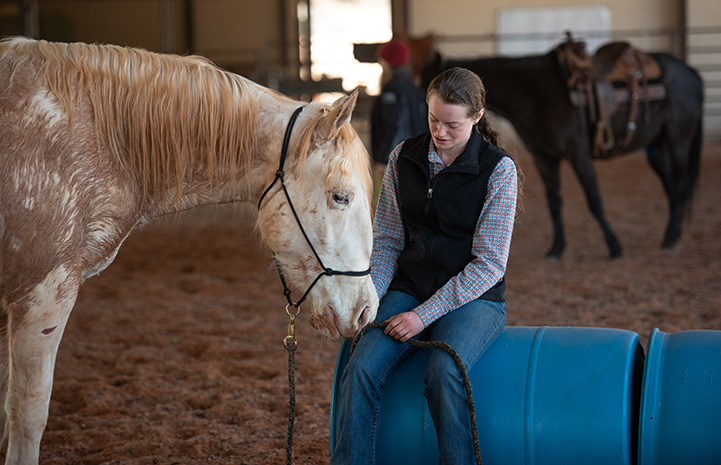 Working up to play 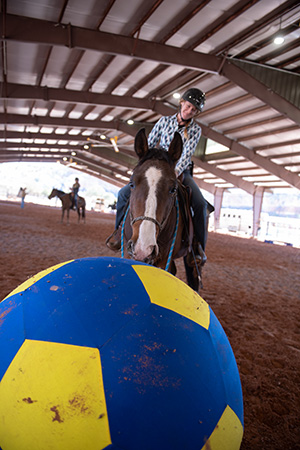 The eight horses ― Peanut, Lumpy, Comet, Connie, Cinnamon, Tuff, Lilly and Bug ― came into the event with solid foundations from previous training at the Sanctuary. But during the event, everything was taken a step further. Spreading out around the arena, trainers worked with their partner horses at their individual paces, using activities Ryan demonstrated throughout the day.

Some pairs, including Lumpy and Kelly, trucked right along. “Lumpy’s kind of the easiest horse in the course,” says Kelly, a trainer from Wisconsin. “He’s gregarious and interested, so that helps you shape the behaviors you’re looking for.”

Though Lumpy is a mustang who started off life wild and separate from humans, Kelly says he doesn’t get worried about much. “He struggled with the hind-leg rope,” she says, “which is when we put a rope around their hind leg and then let them go around at walk and trot and ask them to stop off that pressure.”

It’s counterintuitive for a horse and spooked Lumpy at first, but soon he realized it wasn’t any different from the other activities they’d done and handled it like a champ.

“He’s probably going to make a really great trail horse for someone,” Kelly says while saddling him up for the day. “He’s really comfortable to ride, he’s willing and not very spooky, so those all make good trail horse aspects. He’s been really nice that way. He just sort of takes things in stride.” 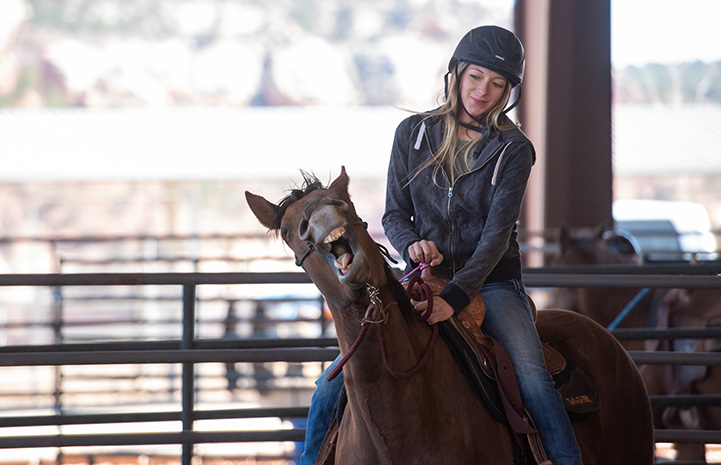 For Ellie and Cinnamon, the oldest horse of the group at eight years old, slow and steady was the way to go. “She stays very tense inside and doesn’t really relax easy,” Ellie says, “and so you have to wait and wait, sometimes five minutes before she’ll relax.”

When they first met, Cinnamon didn’t want anything to do with her ears or face being touched and said “no thanks” to the halter. Part of her training for the two weeks has just been Ellie putting her arm over Cinnamon’s neck and head to get her used to being handled in such a way. Now, she’s enjoying the occasional face rub and sticking her nose into a halter on her own. 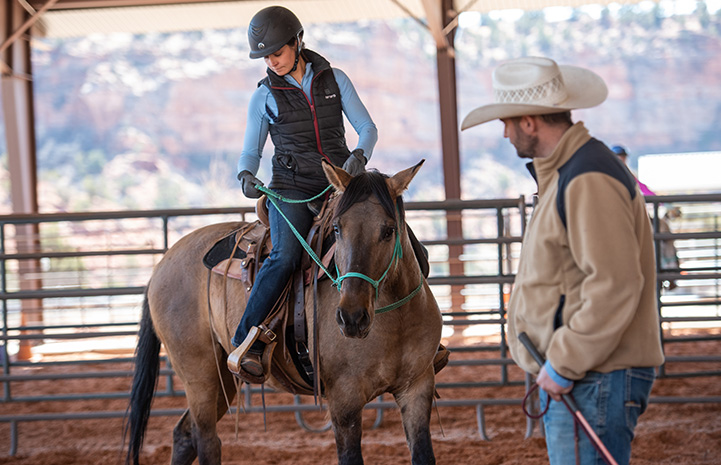 As far as riding, Cinnamon was also tight and nervous. She’d hold her breath and was ready to dart at any moment. “We’ve been taking it very slow,” Ellie explains. “Lots of walking, lots of just getting her used to me on her back. As her confidence has grown, she went out of the arena yesterday and she acted like it was nothing. She takes a little bit longer, but once she gets it, she’s pretty good at it.”

The effects of two weeks’ training are evident outside of the arena, too. When it comes to Connie, a horse who is blind in one eye, trainer Jorah says, “What she lacks in sight, she makes up for in personality. She’s one of our more confident, extroverted horses here.

“She’s still green. just this morning I had her for the first time out back riding and she had a big spook. And just like more introverted and scared horses get scared, she does too. It’s just that she’s more committed to being scared.”

Working with Connie to help her learn to think through her anxiety has had some unexpected benefits, according to Karin, a local volunteer who says Connie used to be very personally involved when she came around to clean.

“She was kind of in your face when I would go in to do the mucking and wanted to chase me around and do all kinds of stuff,” she says. “And now she doesn’t seem to have that nervous energy. She seems more content. She’s more confident.” 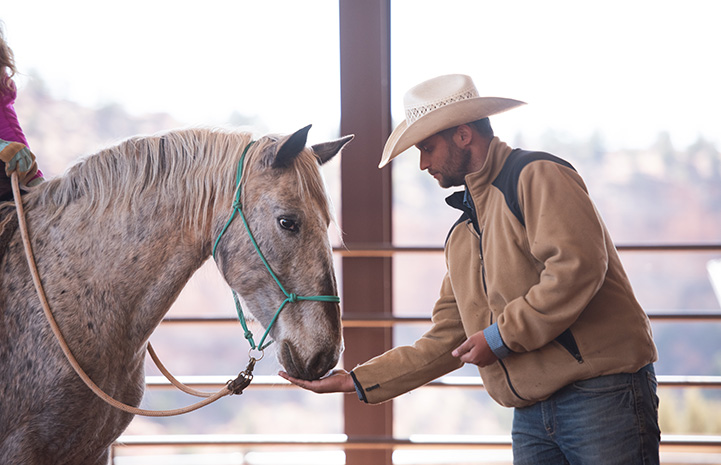 On the penultimate afternoon, the eight human-horse teams played a game of musical barrels. It seems simple enough: While riding, keep the horses moving as the music is playing, and when it stops, stand next to a barrel. But it really put their training to the test.

“The horses all have some basic understanding,” says Ryan. “They can walk, they can trot, turn right, turn left, back up. But it’s harder to do any one of those things on cue ― do it now. It got people to up the ante a bit with the horses and start expecting them to trot now and stop now, so it was a fun way to increase the difficulty a little bit. The riders had a good time, and it was only possible because the horses were prepared and ready to do that.” 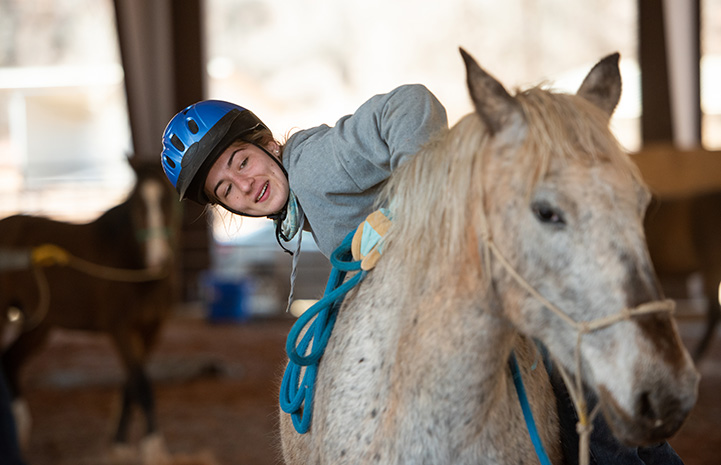 On the last day of the event, there was no slowing down. Though the trainers would soon be saying goodbye to the horses they’d spent the last two weeks working with for hours each day, everyone was full of energy and smiles, pleased with how far they’d come. All the horses were comfortable with a saddle and a rider on their backs, and half of them already had homes lined up.

Some trainers took their partner horses out of the arena to ride and work on their trail skills, while others focused first on polishing up some groundwork. Some practiced a new activity Ryan demonstrated that morning ― an activity meant to help the horses find connection with their trainer and work with them “at liberty” ― that is, without a halter or lead rope. Right up until the last hour, the learning didn’t stop for horse or human.

“I’m super, super happy with how everything went,” says Ryan. “Because we took our time. We were very thorough. We weren’t preparing these horses for us to ride. We were preparing them for anybody to ride. They are very well-prepared for anything. The trainers at Best Friends already had them on that track. We just kind of took them to the next level.” 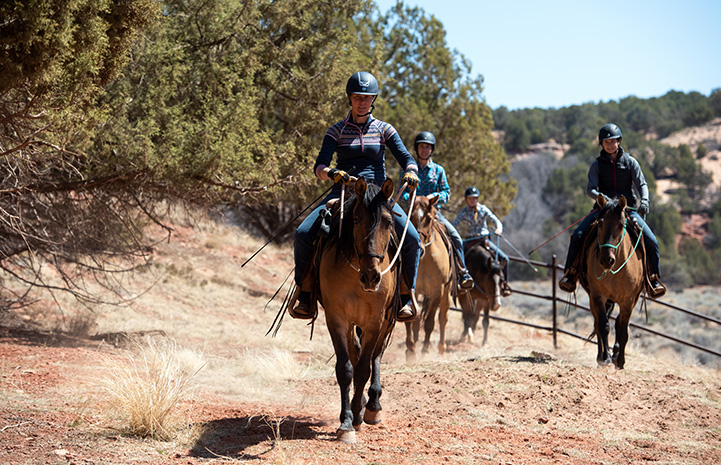 Help pets take the next step

By volunteering your time training animals or even just snuggling, you’re setting them up for adoption success.