Peanut has always had only one hoof in the human world. His mom was part of a large-scale mustang rescue effort shortly before he was born at a wild horse sanctuary. He’s seen people his whole life and was always happy to accept the treats they offered at the fence line. And compared to some of the other horses living there, he was more curious about humans. So, he and some of his friends were brought to Best Friends Animal Sanctuary to leave space for other, less people-inclined horses.

Peanut’s issues stem from the fact that being touched and handled were never part of his daily routine. So when he arrived at the Sanctuary, he still had a lot to learn about living with humans. He was a bit of a tough nut to crack, but once he started coming out of his shell, he began learning more and more each day.

A gentle introduction to the world of people

Because Peanut was already used to people giving him treats, he was always friendly with human visitors and certainly not shy about begging for a snack. But whenever someone approached with the intention of working with him, he’d quickly move away and decline the offer.

“There are a lot of basic life skills that all horses need if they’re going to be living in ‘Humanville,’” says Ann Hepworth, Peanut’s first trainer at the Sanctuary. Being led on a halter, being loaded into a trailer and having his feet handled were just some of the things he needed to learn. And whenever he left the area where he and his friends lived, he became worried and tense.

Ann says when she first started working with Peanut, his activities had to be confined to a round pen. “He had the tendency to blast away,” she says, “and I didn’t want him to practice getting away from me or running away.” So, to keep them both safe, they started small, staying in the round pen for a long time getting him used to some of the training tools. It was all about helping him relax and getting him in the right state of mind for learning. 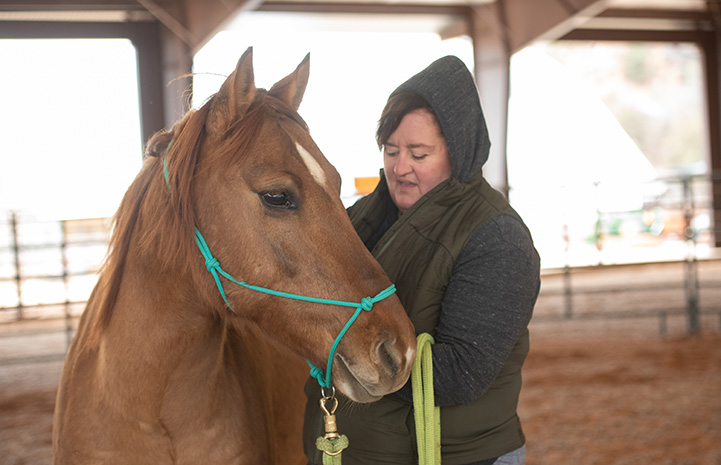 “You don’t want them to be stressed and worried,” Ann explains, “but you have to push them a little bit to get them through that stage. Because if you just leave them be, they’re never going to get there … You want them to feel more like they do with their friends when they’re with us.”

It was slow going, at first, and involved a lot of touching with a stick and string ― one of the main training tools that he was most unsure of. But eventually, he hit a point where he started yawning, blowing, and chewing ― the signs of relaxation Ann was looking for. Each day he got there quicker than the last. And finally, the day came when he was just as calm and relaxed as he used to be tense and concerned.

“He’s in a learning frame of mind and everything has really changed for him,” says Ann. “He can have fun when he comes out, instead of feeling like ‘What’s going to happen to me next?’” Now, in between playing with tarps and bags and other fun toys, Peanut is relaxed and ready to learn all about more of those Humanville basics. 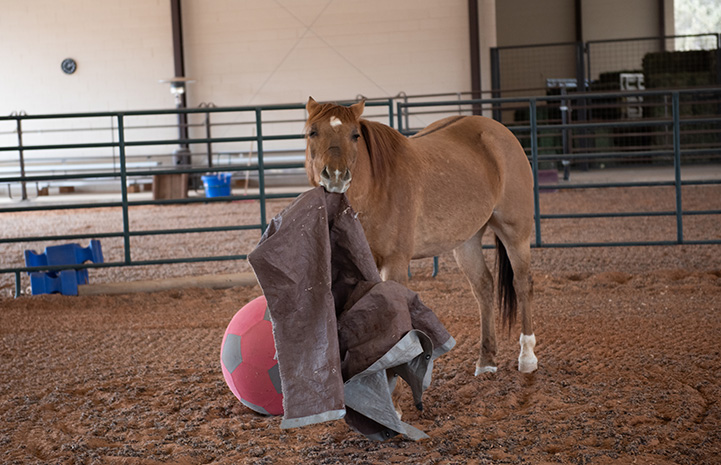 Expanding horizons and having a conversation

Next came working on saddle skills, something he would need to fully prepare him for everything the human world might hold. Because Peanut was shaping up to be the kind of horse who would enjoy the bonding experience of a nice ride, it was a logical next step. Says Ann: “We’ve done a whole lot with the saddle pad and we’ve done the surcingle, which is like a big band that goes around their belly.”

It’s a common misconception that the extra weight is what bothers a horse getting used to a saddle. But it’s mostly the girth (the strap that goes around under the belly to secure the saddle) that makes a horse feel like he’s being grabbed.

Peanut got used to the saddle pad being moved on either side of him, as well as having it sit on his back and slide off as he walked, with the surcingle jingling around with each step. He was finally comfortable and confident enough to know that nothing bad was going to happen, and that allowed him to learn much faster.

To continue expanding his horizons to prepare for life outside the Sanctuary, Peanut was introduced to Jen Reid, another Best Friends trainer. Jen is getting Peanut ready for an upcoming colt start event, an activity designed to get young horses used to the saddle and out on their first few rides. She wants Peanut to be as prepared as possible before the event. 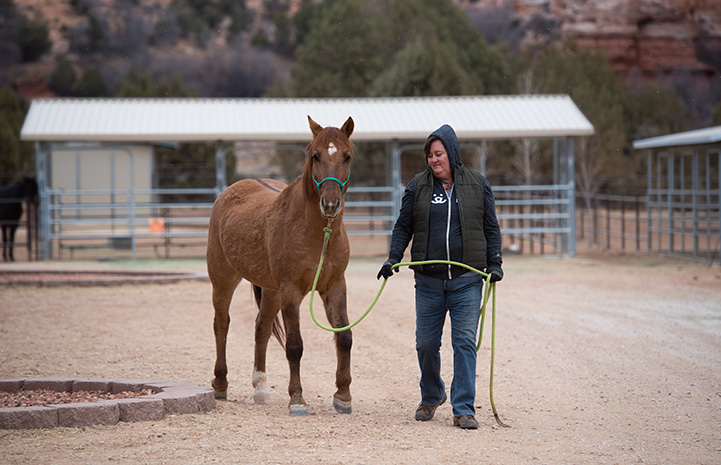 “We’re moving on to things like how to understand cues and being comfortable leading, for example.” Jen says. “Having me not just be able to touch him, but can I touch him and ask him to move his front end over, to move his hind end over.”

Jen describes the process as helping Peanut learn a new language, while she tries to use his language― all so they can have a conversation and work together in a way that’s fun and effective for both of them. It’s all designed to ensure Peanut has a solid foundation going forward.

“Once horses learn that there’s always an answer,” Jen explains, “the more they learn how to learn, and the better learners they become … Peanut’s sort of at that phase now, where he’s like: ‘OK, you’re asking me something. Is it this?’ And I can say yes, that’s it, perfect, excellent, or nope, not it yet, keep going, keep trying stuff. And he’s really starting to get it.”

Peanut has certainly come a long way from seeing humans either as potential treat dispensers or confusing, scary people asking him to do things. Now, the horse who always had three hooves out the door can enjoy his time with a whole new group of friends and learn in a way that’s fun for him. And when he gets adopted and heads home, he’ll have all the tools he needs to succeed in the human world. 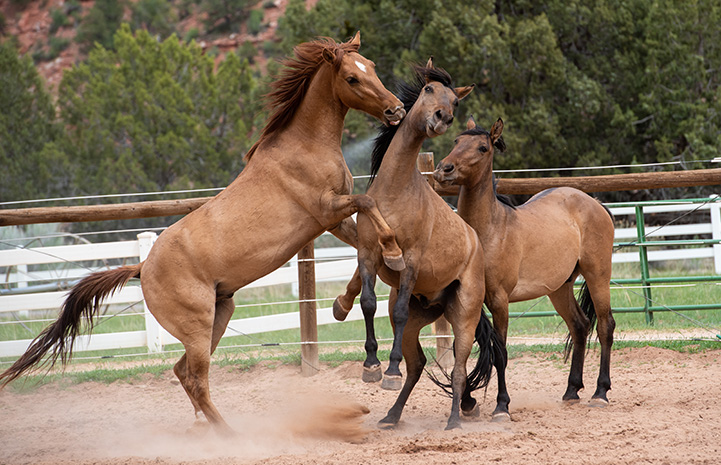 Bring a pet into your world

Learning about the human world is great, but being part of your special world would be even better for a pet looking for a home.