Animals in disasters: how Katrina changed their world 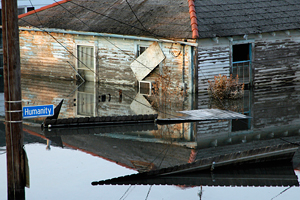 In recent weeks, we have seen tornados tear through the South and the Mississippi River inundate towns and farmland from Missouri to Mississippi while New Orleans watches and waits.

Disasters are a fact of life, and animals are inevitably caught up in the turmoil. We have come a long way in how animals in disasters are related to both officially and by the nation’s animal welfare organizations. Many of the positive changes followed from the terrible consequences of Hurricane Katrina.

Katrina was certainly not the first natural disaster in which animal rescue played an important role. Every disaster affects animals of every category – from wildlife, to farm animal, to household pet. What distinguished Katrina was an apparent breakdown in the overall emergency response system combined with 24/7 news coverage for months on end that began with alarming images of people crammed into the Superdome or wading through toxic waters followed by heartrending video of stranded, starving dogs and kittens swimming through flooded streets and stories of heavy-handed evacuation personnel forcing people, often at gunpoint, to leave their household pets behind to fend for themselves.

Best Friends was the first national organization on the ground in the flooded areas of greater New Orleans and the last to leave. Over 4,000 animals came through our rescue and shelter operations, and we helped with the transport of another 2,000 displaced pets from the Gulf Coast of Mississippi. Our team packed up in May of 2006, nine months after the storm blew through. 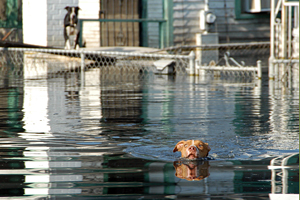 Katrina highlighted the strengths and weaknesses of the animal welfare community as well as those of the federal and state governments in addressing the needs of animals, especially pets, in disasters. Up to and including Katrina, there was no requirement for human evacuation teams to even consider what to do with people’s pets. “No pets allowed” was the rule at emergency shelters for people, as it was on the buses that transported evacuees out of New Orleans and on the boats and choppers that pulled people off of rooftops and out of temporary gathering places, such as the second floor of local banks and high schools in St. Bernard Parish. Many abandoned animals died or were separated from their families permanently.

In the immediate aftermath of Katrina, the late California congressman Tom Lantos introduced a bill that tied future Federal Emergency Management Agency (FEMA) disaster money to a jurisdiction’s compliance with a newly enacted requirement to develop a pet evacuation plan that paralleled their human evacuation plan. It was called the Pet Evacuation and Transportation Safety Act (PETS Act). For the first time, pets were distinguished from other animals in federal legislation and given special consideration. 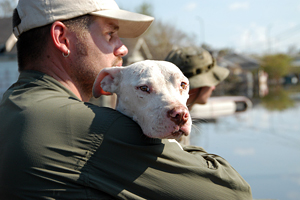 Best Friends met with Lantos and others in Washington to fill them in on the facts of the animal rescue effort. Lantos, a well-known animal advocate, described how he came to the decision to introduce the new law:

“The scene from New Orleans of a 9-year-old little boy crying because he was not allowed to take his little white dog Snowball was too much to bear. Personally, I know I wouldn’t have been able to leave my little white dog Masko to a fate of almost certain death. As I watched the images of the heartbreaking choices the gulf residents had to make, I was moved to find a way to prevent this from ever happening again.”

In addition to legislative changes, the humane community took it upon itself to coordinate future rescue and sheltering efforts and to align our work more closely with state and federal responders who now operate under the PETS Act mandate. Cross-organizational training and planning sessions have been taking place since 2006, and the new look of disaster response for animals has been in play since 2007, becoming more streamlined and effective than ever before.

The collaborative work that is being done across the South and the Midwest is a result of that interagency work. So, if you are seeing fewer cats in trees or dogs barking from rooftops across an expanse of floodwater, that’s the reason. Preplanning, early deployment, tight integration with human response teams and new official status for animal companions are good news for animals and their people.

As I write, multi-organizational teams are at work rescuing and sheltering animals across the flood- and storm-ravaged areas of the country. If you want to volunteer your help or donate to participating organizations, here are some links to follow: ASPCA, International Fund for Animal Welfare, American Humane Assocation, Code 3 Associates, United Animal Nations,  American Veterinary Medical Foundation, PetSmart Charities, and The Humane Society of the United States.