Another win for dog-fighting victims 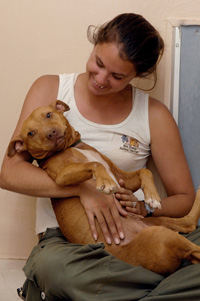 Before Best Friends and a small group of pit-bull terrier advocacy and rescue organizations, such as BAD RAP, championed the cause of the Michael Vick fight-bust dogs, the surviving canine victims of every dog-fighting-ring bust were routinely killed owing to the prevailing myth that such dogs were bad by breeding and unsuitable for rehabilitation and adoption.

The success of the Vick dogs as ambassadors for both dog-fight-cruelty survivors and pit-bull-type dogs in general has helped to change all that. Best Friends led the charge on that change by bringing other national organizations on board and taking the lead in introducing new legislation at the state level to require dog-fight-ring victims to be individually evaluated for a chance at a new life.

On Wednesday, thanks to the tireless work of our lead legislative analyst Ledy VanKavage and a broad spectrum of Florida advocates, Florida Senate Bill 722, spearheaded by Best Friends Animal Society, passed the Florida Legislature, opening the door for Gov. Rick Scott’s signature.

Previously, Florida law required that all dogs primarily or partly involved in dog fighting be deemed dangerous dogs, which was an automatic death sentence, even though experts might not have evaluated them. SB 722 will result in dogs rescued from fighting scenarios being evaluated individually to determine if they could be placed.

The bill, which had unanimously passed in every committee and in the Senate, today cleared the full House by a 99-17 margin. The bill had bipartisan sponsors and co-sponsors.

Ledy summed it up well: “We have been working to remove the automatic ‘dangerous’ stigma from dogs and puppies seized from fighting busts, and although we are pleased with today’s vote, 13 states still have these arbitrary laws. After SB 722 becomes law, we will continue our work to remove the designation in the other states as part of our national pit-bull terrier initiative.”

What the Vick dogs have demonstrated in a very high-profile way is that even dogs that were bred, raised and used for fighting can be rehabilitated and re-homed; they in no way match the image that has been cultivated by gang-banger culture and a media often prone to sensationalism over fact. Pit-bull terriers are like any other type of dog in that their behavior is a product of how they are raised and trained. They are smart, loyal animals that do not deserve the stereotyping and abuse that results in the death of hundreds of thousands of muscular dogs with blocky heads and short coats – many of which are not actually pit-bull terriers at all – in our nation’s shelters.

If we are to achieve No More Homeless Pets, we must remake the public perception of these wonderful dogs. Florida SB 722 is a significant milestone on that path.