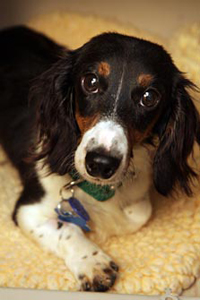 When Best Friends began our peaceful protests of the Barkworks chain of puppy stores in Southern California in 2008, I knew that something had to give — and knowing the passion and commitment of our team, I knew it wasn’t going to be our side.

Image at left, puppy mill survivor rescued thanks to the Best Friends' Pup My Ride program

It was one thing for me to be confident in the inevitability of change, but quite another for the volunteers on the front line who went out week after week for 150 weeks straight with nothing to go on but their profound resolve to help bring an end to the horror of puppy mills.

After three years of patiently handing out literature about puppy mills and hearing and documenting countless stories of sick puppies purchased by unsuspecting shoppers from Barkworks, our amazing volunteers finally have something to cheer about. Last week, the Animal Legal Defense Fund, armed with the reports gathered by Best Friends volunteer teams, filed a class action lawsuit against Barkworks, claiming the stores repeatedly engage in fraud and false advertising in an effort to conceal from customers that they acquire their puppies from abusive puppy mills.

The puppy stores in Los Angeles and elsewhere around the country are the rosebuds on the dung heap that is the world of commercial breeding that begins with marginally regulated puppy mills. 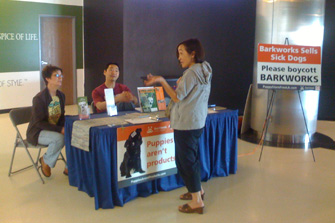 Puppies are cute by definition, but if customers were able to see where over 98 percent of them come from, most would run in the other direction. No one wants to support the cruelty of the mills and no one wants to risk the unknown possible illnesses, congenital defects and behavior problems that are a fact of life when pets are force-bred in factory farm–like operations.

Puppy mills and their pet store accomplices push a stream of animals to market with no regard to their ultimate well-being. About 25 percent of shelter dogs are purebred and many of those began life in a puppy mill.

Additionally, when someone who wants to get a pet goes to a pet store and buys one rather than adopting one from a shelter or rescue organization, he or she is not only supporting a cruel industry, the person is allowing a shelter pet to remain and possibly die in a local shelter.

So, hats off to the tenacious Best Friends volunteers who have given up their weekends for years and will continue to do so as long as animals are dying needlessly in shelters and puppy mills are allowed to operate with impunity.

When it comes to a test of wills, I know which side I’m betting on.

If you want to read more about the class action lawsuit against Barkworks, and other work that’s being done to end the abuses of puppy mills, visit the Best Friends Network News pages on puppy mills.