Cats of the Chesapeake: On stranger tides 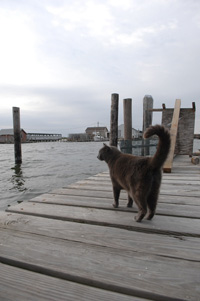 A few years back 74-year-old James D. “Donnie” Crockett drowned when his boat capsized during high winds  and in rough waters on Chesapeake Bay. Crockett was making his way back home to Tangier Island after taking Spotty, one the many community cats that he cared for, to a mainland vet to be spayed. Crockett, like most of the residents on the island, was an experienced waterman and crabber and, also like most, appreciated the presence of the cats and did what he could to look after them, getting them fixed as his resources allowed. Sadly, 58-knot winds and unusually high seas claimed Donnie and Spotty, but Donnie is fondly remembered by friends and neighbors who share his affection for Tangier’s cats.

Tangier Island is a picturesque, three-mile-by-one-mile strip of land in the 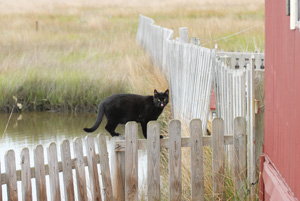 middle of the Chesapeake Bay, about 18 miles from the mainland. The first European to set foot on Tangier was Captain John Smith, better known for having been saved by Pocahontas.  In fact, most of the island's 525 human residents can trace their ancestry back to colonial America when John Crockett, a likely ancestor of Donnie, first settled the island in 1686. Locals still speak a unique dialect that echoes the language of Restoration England circa 1680.

There is no record of when the first cat arrived, but the island is home to almost as many cats as people. About 400 felines call the island home, and residents and visitors felt it was time to stabilize the population with a little bit of trap/neuter/return (TNR) so a call went out to Best Friends.

Robin Politowitz, a CAA senior specialist, spent the next several months hammering out the very complicated logistics of getting the cats fixed on the relatively remote island with no veterinary resources. That meant not only making plans to get the Best Friends team out to Tangier, but recruiting all the medical professionals and hands-on volunteers, as well as rounding up the necessary medical equipment to perform hundreds of surgeries.

Earlier this month, Best Friends’ Shelly Kotter (pictured below), the team and numerous 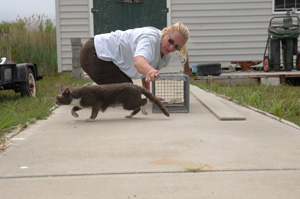 volunteers arrived on tiny Tangier Island along with a crew from Operation Catnip in Gainesville,  Florida, and a group of volunteer veterinarians led by Dr. Newman and Dr. Reiss from Caring Hands Animal Hospital in Virginia. Their goal was to fix as many cats in a week as they could round up.

Shelly went door to door to get information about the island’s free-roaming cats. She heard many cat tales along the way, like the story about the mayor of Tangier (pictured below), a crabber by trade, who was out crabbing following a storm and found four kitties clinging to a floating log. He saved them and now looks after them. And then there’s Jeanne Autry, the late Donnie Crockett’s neighbor and dear friend who took over the care and feeding of Donnie’s colony of a couple of dozen cats after his fateful accident on the bay. 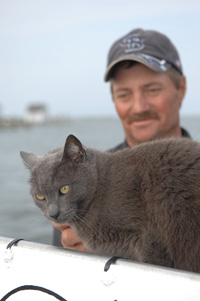 Best Friends’ team took on the job of trapping while the rest of the volunteers, including vets, techs and helpers, set up a makeshift, high-volume spay/neuter clinic, with as many as eight vets working at the peak of operations.  Local kids helped with locating colonies, and despite spring storms and high tides, 250 cats were fixed along with about 3 resident dogs at the request of their owners.  Approximately a dozen cats, mostly unweaned kittens, went home with the volunteers and techs to be placed in loving homes once they are old enough to be spayed or neutered.

Some of the island’s cats had already been fixed, so an estimate of only 50 – 70 remain intact. A follow-up visit is planned for later this year.

Following his passing, someone had this to say about Donnie Crockett on a local Internet forum -  "Donnie was an avid cat lover. He'd always take in stray cats. He believed that was his mission in life here, to take care of the animals."

Somewhere, Donnie and Spotty are smiling.

P.S. I also want to acknowledge the invaluable work of Best Friends Community Animal Assistance team and Robin Politowicz in particular who took the lead and did the advance work for the Tangier Island project.