Doublespeak from U.S. Fish and Wildlife on Feral Cats 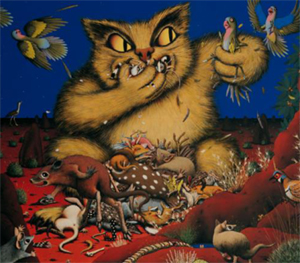 [EDITOR'S NOTE: Sad to say, that we have now closed comments on this post. We love to have thoughtful, civil discourse on issues surrounding animal issues. What we will not allow is repeated violations of our very clear comment policy. When that is broken, we generally warn those who have broken it, and either delete the comments or remove the objectionable material. When it's clear that there are several trolls just looking to pick a fight on the internet, comments will be closed.]

The U.S. Fish and Wildlife Service (USFWS) wants it both ways when it comes to feral and free-roaming cats. On one hand, they claim that they have no policy on trap/neuter/return (TNR), the most effective and only humane method of managing community cat populations. On the other hand, USFWS sponsors conferences where their employees literally demonize cats (see illustration used in a presentation given in January by USFWS biologist Tom Will) as the number one problem facing bird populations based on made-up data.  Additionally, USFWS employees actively advocate against TNR and promote the killing of community cats.

There are several reasons that U.S. Fish and Wildlife has not officially come out against TNR. The anti-TNR contingent inside USFWS blames the lack of an official policy on the agency’s fear of backlash from the pet-loving public. It is also reasonable to assume that an official policy would require rigorous scientific support and background studies.

In fact, there is no rigorous scientific foundation for opposing TNR and there is no scientific basis for the claims made by conservancy groups and USFWS regarding the number of birds killed by community cats annually.

All of the predation claims cited by conservancy groups are based on numbers arrived at by multiplying the number of birds that one free-roaming cat is likely to kill in one day by the total number of community cats in the country. The problem is that no one — repeat, no one — knows with any certainty how many feral and free-roaming cats there are in the country. Likewise, no one knows whether the number of birds killed per cat is accurate or representative for cats in colonies managed by humane TNR methods.

Think about it: If you spay or neuter a cat, that cat will not give birth to or father more kittens. Volunteers do the work for the most part, and, where publicly funded, the cost of TNR is far less of an expense to the public than the unacceptable and inhumane alternative of trapping, sheltering, killing and disposing of dead cats.

Whether or not Fish and Wildlife comes out with an official policy that advocates the killing of community cats (including people’s pet cats who are let outdoors for a few hours a day), there is plenty for cat lovers to be concerned about in the USFWS’s current practice of encouraging their anti-TNR employees to establish de facto policy by publishing their opinions and biases in official training documents and presenting them at conferences sponsored by taxpayer money.

Regardless of the inflated estimates floating around about the number of birds killed by cats, the fact remains that fewer cats will undoubtedly result in less depredation.  Perhaps, rather than using taxpayer dollars to fund workshops advocating the removal, and ultimately the death of all free-roaming cats, USFWS should be working with animal advocates to perfect TNR programs to curtail population growth.

Please contact USFWS director Daniel Ashe and ask him to align his employees’ activities and publications to support non-lethal solutions to wildlife conflicts -- specifically, the TNR of free-roaming cats.