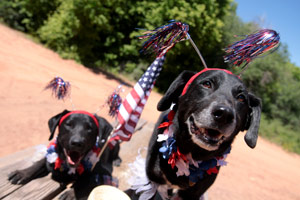 A what? OK, pardon the pun, but Fourth of July weekend parades are a noble American tradition and nothing goes with a Fourth of July celebration like a parade, some hot dogs and a cool drink. What? No, not that kind of hot dog. I mean a hot dog, the four-legged variety who will be walking in the Paw’rade. And no, not a nice cold beer to beat the heat, but a nice cool bowl of water for your best friend along the Paw’rade route!

Puppy mills are a pretty depressing topic, so to lift everyone’s spirit while keeping focused on our goal of ending puppy mills, Best Friends is celebrating Puppy Mill Independence on July 2nd, an occasion in honor of all the animals confined in forced breeding operations across the country, who sadly cannot get out for a walk and who often don’t even have clean water to drink. 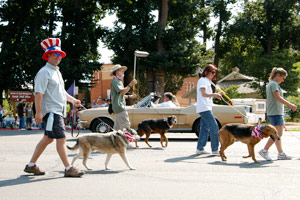 Each Paw’rade will be followed by an Adoption Pawty because adoptions are the best way to put an end to puppy mills. If just a quarter of the people who will be acquiring a new pet in the coming year adopted from a shelter or rescue rather than bought a pet from a store, over the Internet, or from a backyard breeder, there would be No More Homeless Pets! Yes, we are that close to our goal. Seventeen million people will acquire a new family pet in the coming year and about 4 million homeless pets will die in shelters. The easiest way to put puppy mills into the dustbin of history is to dry up the demand for puppy mill pets by filling those homes with an adorable adopted pet.

Participants and passersby will receive a Pro-claw-mation of Independence. These puns are killing me, but hey, it’s a holiday calling for an end to puppy mills.

In New York, the Paw’rade will end at Pocket Pooches, 748 Ninth Avenue between 50th Street and 51st Street, a local pet store that recently converted, with help from Best Friends, into a humane, rescue-only store. That means the store will no longer sell dogs supplied by puppy mills and will only feature rescue animals for adoption. What a great place for a Puppy Mill Independence Adoption Pawty!