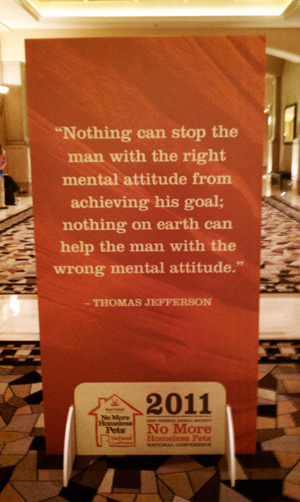 The 2011 No More Homeless Pets National Conference wrapped up yesterday at the Rio Hotel in Las Vegas, and I must say it was an extraordinary event. This year’s theme, “Imagine It … Achieve It,” was embodied in the many presenters who have defied convention or developed a lifesaving program powered by their own vision and dedication.

Best Friends started hosting these conferences just over 10 years ago, with 250 animal lovers in attendance, and they just keep getting better. This year, nearly 1,400 animal lovers were on hand for three days of intensive workshops, networking and plenary sessions.

The No More Homeless Pets National Conference is a great indicator of the vitality and energy that is lifting the no-kill movement to greater heights. About 70% of the attendees had never been to a No More Homeless Pets conference before and about half again had never been to an animal welfare conference. That’s a lot of new blood, energy and potential for the animals — and they got to learn from the best.

I was particularly excited about the Friday and Saturday morning plenary sessions. Friday’s featured a brief introduction to seven different communities that have achieved no-kill status or are making significant strides in that direction, and each community featured a different model. Highlighted were Bonney Brown and the public/private partnership model that thrives in Reno, Nevada; Bill Bruce and the municipal animal control, community outreach and enforcement model of Calgary in Alberta, Canada; Jane Weatherford and the rural model of Brown County, Indiana; Peter Marsh and the publicly funded and targeted low-cost spay/neuter model that made New Hampshire a no-kill state; Susanne Kogut, whose Charlottesville-Albemarle model of a nonprofit with an animal control contract has maintained no-kill status for five years; Arlyn Bradshaw of the Salt Lake County Council, where they are translating Bill Bruce’s Calgary model into a working American model at Salt Lake County Animal Services; and Dr. Ellen Jefferson, executive director of Austin Pets Alive, which has demonstrated the potential for a private rescue organization to take a city to no-kill. After a brief round of introductions, attendees could choose to attend a workshop with the no-kill leader whose community and work best reflected their own community.

On Saturday morning, I was privileged to be part of a “fireside chat” discussion that also included Rich Avanzino, Mike Arms and Becky Robinson. The chat was hosted by Francis Battista and Julie Castle and provided an opportunity for those of us who were on the frontlines back in the 1980s and early 1990s to share some of the challenges and obstacles that were faced and talk about how they were overcome. In many cases, the problem-solving tactics that were employed became primary strategies for our movement — high-volume adoptions, TNR, public/private partnerships, the role of sanctuaries and the creation of national networks and collaborative partnerships. The session received a very long and enthusiastic standing ovation.

There is no doubt that, as happens every year, attendees will return to their community with new ideas and inspiration to save more lives. And, as also happens every year, a few new stars will be born for our movement from those who attended for the first time and, a few years hence, they will be presenting at the conference as experts on a new way to help achieve our mission of bringing about a time when there will be No More Homeless Pets.