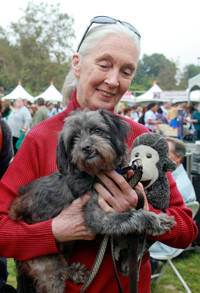 I had the pleasure of meeting Dr. Jane Goodall at the Best Friends Strut Your Mutt event in Los Angeles on Saturday, September 24th. Dr. Goodall is, of course, world famous for her groundbreaking and most comprehensive and revealing studies of chimpanzees in the wild. She began that work in 1960 and has since become a worldwide icon for primate advocacy, wildlife preservation, habitat protection and an enlightened human relationship with all living things. (You can check out the Jane Goodall Institute website for more information on her lifesaving work.)

At the Strut, as she took time to pose for some photos while holding one of the Strut Your Mutt dogs who was available for adoption, I commented jokingly that obviously primates weren’t the only animals with whom she has a special bond. Dr. Goodall quickly replied that she learned her most important lessons about animals from her childhood dog, Rusty. She learned that animals have individual personalities, minds and feelings. Of course, these are the same common sense observations that are the underpinnings of Best Friends and the no-kill movement.

In fact, there are many similarities between Jane Goodall’s message, methods and her relationship to the traditional schools of thought and the Best Friends philosophy and approach.

Like the founders of Best Friends, Dr. Goodall launched into her chosen field with no formal training. In her case, it was field studies of animals, and like the Best Friends founders, she proceeded to break all the rules and annoy the “experts” — rules like giving her subject chimpanzees names and ascribing feeling and emotions to them. Her gentle demeanor and nonintrusive approach to our closest relatives in the animal world enabled her to build trust with the chimpanzees. As a result, she was able to definitively document primate toolmaking and other skills as well as their cognitive abilities akin to those of humans that established scientists had previously denied primates possessed. She literally changed the way the world views animals.

More striking, though, than the similarity of her personal approach to animals with the approach of the founders of Best Friends to animals is the message of kindness that permeates her organization and ours.

Without comparing notes, we arrived at the same worldview and an almost identical set of guiding principles. 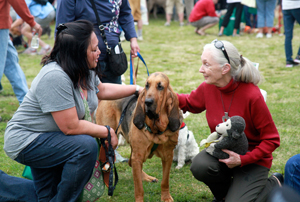 • We strive to respect, nourish and protect all living things; people, animals and the environment are all interconnected.
• We believe that every individual has the ability to make a positive difference.

What’s really of interest here is that these are the same conclusions that anyone who opens themselves to an honest relationship with animals would arrive at. Rather than distancing and distinguishing ourselves from other animals as lesser and unfeeling — an approach that has made animal experimentation and abuse, including shelter killing, somehow acceptable — people who do approach animals as unique individuals and friends arrive at a shared appreciation of all life as expressed in the principles and values of the Jane Goodall Institute and Best Friends.

If Jane’s dog, Rusty, could have written, he would have probably come up with a similar list of values. Fortunately for Rusty, he had a very capable student.