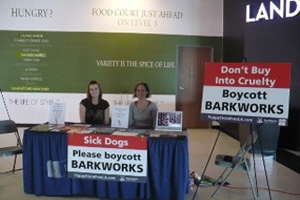 When I was a kid, my friend Karen Weddington and I set up a lemonade stand outside her house to raise money so we could go to girls’ camp. We lived in a new subdivision at the top of a very long and steep hill. You either had to be a resident of the neighborhood (of which there were few) or on your way to a camping trip in the mountains to pass by Karen’s house — you get the picture. We drank most of the lemonade before the day was finished and raised less than $10.

I had flashbacks to my failed lemonade days when I joined Elizabeth Oreck, 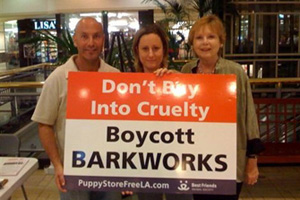 Best Friends’ national puppy mill initiative manager, for a Saturday afternoon tableside educational protest in a local Los Angeles mall. There we were, sitting tucked away at a table in an obscure corner of the mall. We were talking to passersby about puppy mills and their connection to the pet stores that sell their puppies for profit. T

he trouble was we were so far away from the pet store that sold the puppies, it took a lot of extra explaining to make the connection to what we were doing and why it related to the pet store one floor down and a quarter of a mile away from us. You see, the folks who owned the mall imposed restrictions that left us with locations in the mall that weren’t much better than the location of that lemonade stand I had as a kid. They also blacked out holidays, so our tableside teams couldn’t reach peak mall traffic. Weekend after weekend, Jennifer Krause, Los Angeles puppy mill initiatives coordinator, Elizabeth Oreck, and dozens of extremely loyal and dedicated volunteers sat at tables, tucked away in mall corners across LA and Orange County, educating the public about the pet store and puppy mill connection. It was, most of the time, a thankless, difficult job. (You can join their Best Friends L.A. Facebook page )

The Big Daddy Goes Down 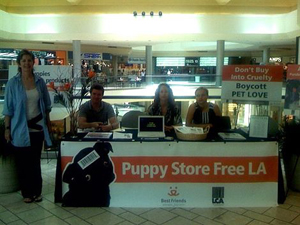 Despite theses locations our teams out in LA were still seeing success, including effecting change at the big daddy of daddies, the Beverly Center’s Pet Love. This particular store had been selling puppy mill pups for nearly 20 years. You can only imagine how many thousands of unfixed animals they injected into the Los Angeles community over the years.  That store has closed down now, thanks to Best Friends tabling efforts. In fact, 8 pet stores have now closed down in LA, rather than change to our recommended humane model, due to peaceful protests from a variety of organizations. And a handful more have converted their model to adopting rescued pets.

No Longer in a Corner Near the Big and Tall Shop

In a ruling Wednesday, a 3-0 decision by the California Court of Appeals now allows freedom of speech for protesters inside California malls near pet stores. Best Friends was fortunate to have the pro bono services of attorney Ira Bibbero and law firm Browne Woods George represent us in the Superior Court appeal. Bibbero’s two-year effort, along with assistance from attorney Eric George, made this possible for the pet store animals of California. No longer can shopping malls put us in the cheap-rent district near the big and tall shop.

Wednesday’s decision isn’t just about the Los Angeles area; it applies to malls across California. The ruling sets a freedom of speech precedent across the state, not just for animal welfare, but for any advocate with a cause that is near and dear to them. Best Friends is indeed grateful to those who are the backbone of our work — the many volunteers who have spent the last several years, weekend upon weekend, helping educate the public about the horrors of puppy mills and the stores that sell puppies from them. Tonight, let's all have a big glass of lemonade to toast to their efforts.