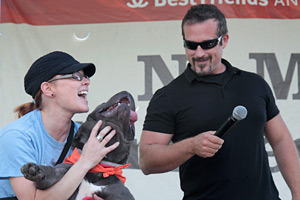 Yesterday I played host emcee for the Los Angeles Fall Super Adoption in the truly lovely setting of the La Brea Tar Pits Park, right next to the LA County Museum of Art. A great venue indeed. These are my favorite events for the obvious reason that animals come from the shelters and don't go back! It's also great to see all the area shelters and dozens of rescues all working together with a common purpose.

You have to see one of these super adoptions to appreciate the energy and fun. I spend most of the day on stage promoting shelter dogs to the crowd.  This go around, Harrison Forbes (pictured above), Nashville based Pet Talk Radio host, dog trainer and all around good guy helped work the stage.

Our pitch for shelter dogs includes some basic themes: how rewarding it is to save a life, how great these shelter dogs are...how this one comes from a long line of geniuses and that dog will make the ideal running companion. Old dogs are easy care for and oh, so grateful, young dogs are bouncy, cute and eager to learn...why this dog is good if someone in your family has allergies and how this one can be taught anything because she is so food motivated, etc. 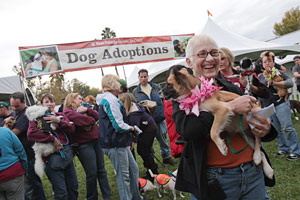 the dogs and drew an attentive and appreciative crowd. The mayor has recently hired the very progressive and energetic Brenda Barnette (pictured right) as General Manager of LA Animal Services. Brenda was on hand all day and stayed until tear down helping promote dogs that needed good homes.  Both Brenda’s and the Mayor’s support of the animals is noted and appreciated.

Of course, some celebrities were in attendance to cheer on the animals, help spotlight shelter dogs and support the cause including Denise Richards, Kelly Wearstler, who adopted a lab mix puppy, Autumn Reeser, Patrick Fabian, Amy Smart, Rachelle Lefevre, Matthew Allen, who fostered a cute white pit bull, and Julie Marie Berman.

For me, though, the big news is Lester.

At the end of every one of these events, there is a scene that looks like the 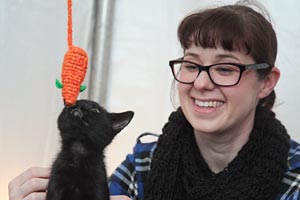 floor of the New York Stock Exchange on the busiest day of the year.  Shelter workers and volunteers line up with all of the dogs and cats that have not been adopted.  The rescuers circulate among the animals to select those they can take, call other rescuers that are not in attendance, check with their fosters to see if there is room at the inn and generally scramble to try and insure that no animals return to the shelters. To help facilitate the process, Katherine Heigl’s, Jason Debus Heigl Foundation, committed $100 for every dog pulled by a rescue at the end of the day, and $50 dollars for each cat to assist with boarding or medical costs.

It’s a wonderfully eccentric scene that any rescuer would recognize, complete with tears of joy and relief...basically an emotional wringer.

So, back to Lester.

At the end of the day there were probably about two-dozen beautiful, small, healthy dogs that needed to go to rescue.  Some were taken by rescues, and some were designated to go on the next Best Friends Pup My Ride transport, but all landed with the guarantee that they would find a new home.   Silva and I came away with Lester, a remarkable, beautiful 3-year old wire haired guy weighing in at about ten pounds.

Lester is gorgeous, and not at all untypical of the small dogs that still needed placement after the 5,000 or so people who attended the event had gone.

He is the living embodiment and definition of an adoptable dog, but aren’t they all? 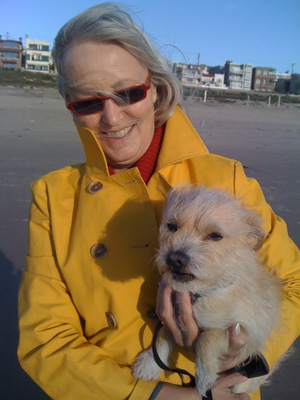 Lester (pictured right with Silva)  had been surrendered by his previous owner to one of the LA County shelters that services a middle to lower income area of Greater Los Angeles. Dogs like Lester crowd area shelters. He is not a pure breed, but it’s likely that either or both of his parents were. The Lesters of the world are why Best Friends initiated Pup My Ride Los Angeles,  a transport program that moves 50 – 75 small dogs every month from LA city and county shelters to communities in Utah and Montana where small dogs in shelters are a rarity. The thousands of small dogs that have been saved in this way by Best Friends and other rescue groups over the course of the last few years, are testimony to the burden that puppy mills and back yard breeders place on the shelter system across the country. It’s why measures like the recently passed Prop B in Missouri, that limits the size of puppy mills, among other reforms, are so important. It’s why the peaceful protests at pet stores nationwide that educates the public about puppy mills and commercial breeders are important and growing week by week.

Lester is a gem, and now he is Silva’s new best friend. There are Lesters waiting for you or someone you know at a local shelter or rescue. Saving a life was never so easy or so much fun.

At the end of day 250 shelter animals including 3 rabbits did not return to the respective shelters from whence they came but instead went to cozy new homes or rescues.

We are still waiting for the adoption numbers from the rescues in attendance, which we won’t have tallied for a few days, but we could be looking at a new record for a one day adoption.

Can I get an Amen!, people?