That would be Mama, the German shepherd that Silva and I adopted recently from Harris County Animal Shelter in Houston, not my dearly departed Italian mother!

I want to tell you her story because she almost became a number. She was a hair’s breadth away from being one of the 4,100 pets killed every day in America’s shelters. She has been a wonderful addition to our family and is perfect in so many ways, but because she is an older girl with a bit of grey on her face and a few extra pounds from inactivity, she was at an adoption disadvantage compared to the many younger dogs also looking for new homes. I knew, though, that taking a chance on a dog like Mama was really taking no chance at all.

I first met Mama (then named Buzz) when her stay at the crowded shelter had just about timed out. Her adoption fee had been waived because her time was up, she was large and she was older. Amy Kohlbecker, our Best Friends staff person embedded at the shelter, was eager to move all of the dogs in that row to homes or to foster care ASAP before the sad reality of killing overtook them.

Mama was listed as eight years old and an owner surrender. Her cage card read “Staff Favorite.” It was like seeing a sweet, confused grandmother on death row.

Whenever I visit a shelter, I feel obliged to make contact with every dog and cat in the place. Giving them the acknowledgement of eye contact and a kind word is the least I can do. If you allow yourself to connect with them, it is a haunting and motivating experience.

As we say often and can’t say enough, pets don’t belong in shelters. They belong in homes. Even the best animal shelters are heartbreaking places, and I take my hat off to any animal lover with the courage to work on the front lines with the goal of saving lives and making a difference in those environments.

Some shelter dogs optimistically greet every passerby like their new best friend, and you feel that whatever contact or encouragement you can give them via a brief encounter through a wire cage genuinely lifts their spirits and makes their shelter time more bearable.

Mama, like many dogs and most shepherds I’ve met in a shelter environment, is too smart for her own good. By that, I mean she knew that she was in a bad situation and, while perfectly sweet, she was in no mood for idle chitchat. She wasn’t pleading for help or attention, but her eyes said, “What happened? Why am I here? This is not my home.” 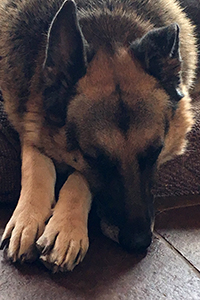 “I’ll take her,” I told Amy. We had adopted another girl from Harris County a few months earlier — Lulu, a small, super bright and beautiful shepherd mix who was a bit confused about whether she wanted to lick your hand or give you a warning snarl or both. An alpha female, Lulu wants to run our doggie household and all the older boys accept her self-declared role. We would just have to see how Mama would take to Miss Bossy Boots and vice versa.

Mama arrived at about the same time as Billy Boy, a cute little maniac blue heeler who’s from Palm Valley Animal Center in Edinburg, Texas, where I visited after Houston. He bombed around like a torpedo with no guidance system and efforts to corral or correct him sent Mama scuttling to the safety of a dog crate looking guilty and feeling responsible. Poor dear!

One evening, I had a heart-to-heart with Mama. I knelt beside her as she was lying in one of the many dog beds that populate our home and put my hands on either side of her neck and shoulders and took a relaxing deep breath. I applied gentle pressure with my hands and could feel the tension go out of her. I told her that she’d done nothing wrong and that she was a very, very good girl. Her demeanor changed from that point forward. As she grew more confident and playful, her apparent age began to slip away.

Dogs are very tactile creatures. They rub against each other in greeting and curl around your legs as an expression of friendship and affection. All household dogs need the reassurance of gentle physical contact from their people, and shelter dogs may need just a little more. Reassurance that they are an indispensable part of the family, reassurance that they did nothing wrong to trigger the events that led to the trauma of their shelter stay, and reassurance that you love them as much as they love you.

Mama is happy to cede the head of household role to Lulu, although she does get visible bounce to her step when Lulu and Billy Boy are out in the yard running each other ragged. All three have settled in and are great family members, even though each was considered a difficult placement compared to the hundreds of other dogs up for adoption in their respective shelters.

So often, the dislocation of losing a home plus the stress and confusion of the shelter environment invite temporary coping behaviors in dogs that don’t reflect their true personalities. In my experience, these behaviors vanish when they realize that their new home is just that — a home.

Silva and I are delighted to have these three new shelter dogs as part of the family, and I’m glad I knew enough to look beyond superficialities.

That’s why we encourage everyone to go to a shelter the next time they’re in the market for a pet. You may never know what a dog or a cat from a shelter went through before she came into your life, but you’ll have the satisfaction of knowing that you can assure a happy future for her.

Adopt a shelter pet and save a life. Together, we will Save Them All.