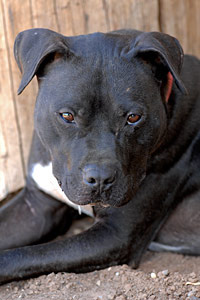 LA Times sports reporter Bill Plaschke wrote a compelling piece for yesterday’s paper on the resurgence of Michael Vick as an NFL quarterback for the Philadelphia Eagles. Plaschke interviewed the caregiver of Mel, a pit bull and former resident of Best Friends Animal Society---and one of Vick’s former canine victims. Powerful stuff. Plaschke’s article boils down to this question:

“Essentially, an ex-convict is dominating America's most popular sport while victims of his previous crime continue to live with the brutality of that crime, and has that ever happened before?

Do you cheer the player and boo the man? Can you cheer the comeback while loathing the actions that necessitated the comeback? And how can you do any of this while not knowing if Vick has truly discovered morality or simply rediscovered the pocket?”

From what we at Best Friends know of the way Michael Vick has related to the animals he abused, the answer is clearly that he has “simply rediscovered the pocket.” Best Friends took 22 of Vick's 48 seized dogs and the only contact we’ve received from Vick or his representatives was by way of some overtures from his agent, one of his attorneys and a PR firm specializing in reputation rehabilitation. They were interested in some public glad handing that would put Vick in a favorable light with the NFL, which at the time was still considering whether or not to reinstate him. We declined.

Best Friends has never heard from Michael Vick or any of his representatives inquiring after the health or well being of any of the 22 dogs that we received from his fighting ring.

According to the law, Michael Vick has paid his debt to society. Many would argue though that being free to get on with his life is one thing. Being welcomed into the highly privileged ranks of the NFL is quite another and warrants a much higher threshold of qualification. Plaschke again:

“...a large percentage of the population will still think Michael Vick is a sociopath. Many people will never get over Vick's own admissions of unthinkable cruelty to his pit bulls — the strangling, the drowning, the electrocutions, the removal of all the teeth of female dogs who would fight back during mating.”

Obviously not a sufficiently large enough percentage of the population feels that way to deter the NFL from allowing someone on the field who many do believe is a sociopath ex-convict as long as he can fill the seats. They wouldn’t do it if they didn’t know they could get away with it.

Despite the fact that America is routinely described as a nation of animal lovers, concern for the lives and well being of those animals doesn’t yet compete with the desire to be entertained. That’s a problem.

It’s a problem because the same imbalance of public opinion that tolerates Michael Vick as a celebrated athlete also tolerates puppy mills, pet stores and shelter killings…each a cause of suffering many magnitudes the scale of Michael Vicks crimes and in some cases the same order of depravity.

Ending the societal abuse of homeless pets that results in the death of 4 – 5 million animals annually in our shelter system will require more than the heroic efforts of rescuers, it will require recruiting a larger percentage of this nation of animal lovers to a value proposition that places the lives and well being of our animal companions above personal entertainment, the allure of designer breeds and pets as fashion statements. The Michael Vick story is, for me at least, a marker along the way pointing us to the tasks ahead on the road to No More Homeless Pets.