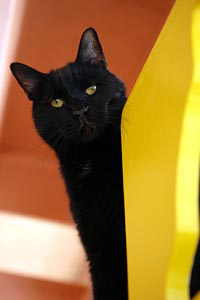 (Editor's note: This is a repost from October 2010 on an important lifesaving topic)

Why all the fuss?

There is an old rumor that adopting black cats around Halloween is dangerous because there are legions of devil worshippers or animal abusers out there looking for black cats to sacrifice or torture. Not true says adoptions guru Mike Arms, brainchild of the annual Home for the Holiday’s promotion and president of Helen Woodward Animal Center: “I have heard this old wives’ tale more than once in my career.  You would think by now that pet adoption agencies would be professional enough to be able to screen potential adopters in evaluating a good home life.” 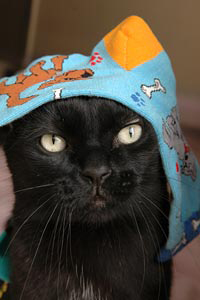 There is no evidence that adopting black cats around Halloween poses any greater risk to the pets than adopting them at any other time of the year. National Geographic did an article in 2007 titled “Ritual Cat Sacrifices a Halloween Myth, Experts Say.” Experts on Halloween and cults have found "no confirmed statistics, court cases, or studies to support the idea that serious satanic cult crime even exists.” But myths die hard especially when they are perpetuated by well-meaning shelters or rescue groups who are themselves just acting on or passing along an unsubstantiated rumor.

There is, however, plenty of evidence to show that not adopting cats of whatever color from shelters will cost them their lives.

In most shelters, black cats are the last to be adopted, so saddling them with the additional baggage of taking them off the adoption roles for up to a month or more before Halloween makes no sense. Black cats and all cats in shelters have much more to fear when it comes to not getting out of shelters at all. The overwhelming majority of pets dying in shelters today are cats. 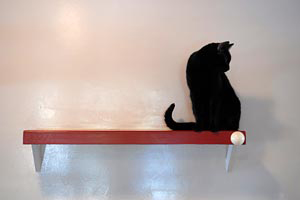 We need to promote the adoption of more cats all year round, black ones included. There are definitely concerns for your pets on Halloween as on any holiday ... bags of chocolate sitting around, strangers knocking on the door in silly costumes and maybe a Halloween party that disrupts the household routine, but adopting cats is not something to fear.