Bill Bruce will be presenting at the Best Friends National No More Homeless Pets Conference in Las Vegas, October 15 - 17.

Canada is that big country to our north with a small population, funny football rules and a disproportionate number of expatriates living it up as Hollywood stars. They don’t get a lot of respect or attention from us southerners because well, because they are so darned nice. They don’t complain much about the loud music from next door and they’re not streaming across the longest un-militarized border in the world because they are quite happy where they are, and things work quite well thank you very much! Besides they are just too polite to go anywhere uninvited.

Americans tend to think that Canada doesn’t have much to teach us except maybe hockey and that crazy winter Olympics sport from Scotland (lots of Scots in Canada, FYI) called Curling where they chase a big round stone down the ice with brooms...kind of team shuffleboard for cold people, but with a twist. 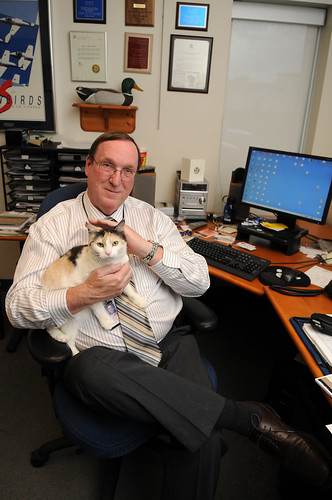 Take cats for instance. The return-to-owner rate for cats in the US is a miserable 2%. In Calgary 49% of cats are returned to their owners and 29% are adopted. That’s a 78% save rate. In this country, the save rate for cats by all methods...return to owner, adoption, transfer to rescue, is around 30%.

What about dogs? Sure, we got dogs...an amazing 89% of dogs are returned to their owners in Calgary, 9% of impounded dogs are adopted and only 5% euthanized. That’s impressive and in case you’re thinking that Calgary only has about two dozen people living there, think again. It is a major metropolitan area a bit larger than San Jose, California and bit smaller than Dallas, Texas. Yup, a real city!

But wait! There’s more! Bill Bruce accomplishes this with no tax payer dollars at all. Zero. The department is funded entirely by pet licensing fees and animal regulation enforcement fines

How does he do it? Bill Bruce is no magician and he’s certainly not a firebrand.  Of course, he’s a polite and unassuming Canadian.  He has a tight knit plan and he’s executed it to perfection, creating an animal services department that is not only the envy of the continent, but it can be handed over to the next person in line, just like any well run city services department because there is no secret personality sauce required and no Herculean effort of will. Strangely, it's just good municipal administration. Sound boring?  Not to all those animals whose lives have been saved.

Bill Bruce believes in getting out in front of the problem, and unlike the complaint driven, shelter centric model of most US animal control agencies, Calgary favors a proactive community relations / enforcement model. The mission statement reads: "To encourage a safe, healthy, vibrant community for people and their pets, through the development, education and compliance of bylaws that reflect community values." Calgary's animal control officers are trained in community relations. They focus on public education about responsible pet ownership, pet licensing compliance and addressing as many animal issues as possible out in the community before they become shelter problems. Bill has turned the dog catcher into a community animal care resource. Consequently, even though the population of the Calgary service area is comparable to that of a fairly large American city, the number of animals coming into the custody of animal services is low...about 5,000 animals impounded in Calgary in 2009 compared to over 30,000 in Dallas and over 17,000 in San Jose.* Keeping animals out of the shelter and in homes in the first place seems to me to be a better way to invest resources than trying to solve the puzzle after the animals have landed in already crowded shelters.

Bill Bruce's model is not without it's detractors, however. What's not to like? The main issues that some in the no-kill movement have is that they believe licensing compliance is a deterrent to multiple pet households and one of the strategies of no-kill is to encourage people to adopt as many pets as possible. Bill's licensing program for cats is even more of an issue since community cat advocates fear that any cat licensing requirement could threaten to penalize community cat care givers who look after dozens or even hundreds of cats. Cat licensing is generally a taboo subject in No More Homeless Pets circles because in US cities and states anyway, putting that power in the hands of unsympathetic politicians and bureaucrats is a scary proposition.

Is it possible to come up with a licensing model that doesn't deter ownership and community cat care? Probably, but without a Calgary style makeover in the operational focus of animal services, simply ramping up licensing enforcement won't help the animals or the shelters.

Personally, I'd like for us in the US to identify a couple of zip codes, and implement a pilot project involving a few animal control officers who have done some understudy work in Calgary and compare before and after stats.

Bill Bruce will be presenting at the Best Friends National No More Homeless Pets Conference in Las Vegas, October 15 - 17. He makes a lot of sense and we have a lot to learn from our Canadian neighbor. Who knows, you may even come to appreciate Curling!