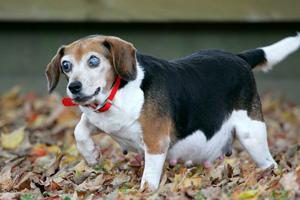 Mabel is a blind beagle who was rescued from a puppy mill a few years ago by Best Friends’ emergency response team. Mabel’s eyes were bulging and opaque from untreated glaucoma. She was kept pregnant her entire life and had never felt grass beneath her feet. The story of puppy mills is the story of hundreds of thousands of Mabels.

Puppy mills are a horrible business and a horrible way to make a living. Last November, the will of the people of Missouri was expressed with the passage of Proposition B, the Puppy Mill Cruelty Prevention Act. Prop B was passed by a direct democratic vote that garnered the support of tens of thousands of Missourians to introduce basic humane standards to Missouri’s huge puppy mill industry.

Apparently, the will of the public might need to take a back seat to the will of handful of lawmakers and the lobbying efforts of breeders and their ag business colleagues. SB 113, a Missouri Senate bill that effectively guts Prop B, passed the state Senate yesterday. The Missouri Senate slipped in the vote as emergency legislation. In a double-hammer blow, the senators also rejected an amendment that would have required approval of those changes by Missouri voters via referendum. 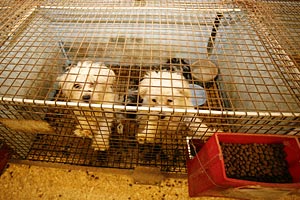 If SB 113 passes the Missouri House and is signed by the governor, the move would put an end to the hope for improved care for many thousands of puppy mill dogs in the Show Me State and effectively put a stake through the heart of a democracy in Missouri. I guess a handful of legislators know better than tens of thousands of Missouri citizens. A more appropriate slogan would seem to be the “Show Me the Money” state.

Puppy mills push more pets into the market than the number of pets who die annually in shelters, and breeding dogs can spend their entire lives stacked in wire-bottom cages just large enough to turn around in, suffering and dying in the uncaring possession of people whose only concern is profit.

Not only would SB 113 roll back the provisions of Prop B that limit the number of dogs that a miller can breed continuously, it would also remove the requirement that dogs should have continual access to water. The new law would allow for water to be offered only once every eight hours, and it would also remove the Prop B provision that says that the water must be “free of debris, feces, algae and other contaminants,” along with the provision that requires cages to be cleaned of waste every day.

This bill isn’t simply about Prop B being cost prohibitive to breeders; it reflects the millers abusive mindset that regards dogs as nothing more than a cash crop. SB 113 is expected to pass the Missouri House, but there is still the hope that Governor Jay Nixon will respect the will of the people and veto 113 if it makes it to his desk. If you live in Missouri, you can help by contacting your representative and asking them to vote no on SB 113.

Whatever the fate of Prop B, the breeders, who refer to puppy mill dogs as livestock and who regard livestock as products rather than as living, feeling beings, are in retreat. When the majority of voters in a heavily agricultural state such as Missouri vote to curtail the abuses of puppy mills in an off-year election and in a down economy, the writing is on the wall.

We will not abandon the cause of the animals who suffer and die in puppy mills nor the burden that these commercial breeders place on our nation’s shelters.

Mabel and all Mabels like her are counting on all of us to end this national shame.