Best Friends Animal Society’s Ledy VanKavage has been nominated by the readers of American Dog magazine for Animal Welfare Lobbyist of the Year. Voting ends December 5, so get out your keyboard and vote for the real deal, Ledy VanKavage. 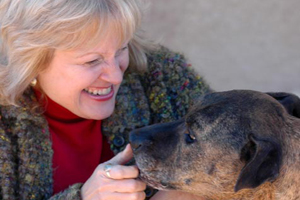 Rightly or wrongly, I have this indelible visual in my head associated with Ledy, Best Friends’ senior legislative attorney. It goes something like this:

Some weary state legislator is attempting to sneak out of the capitol after a long day of meeting with his constituents, getting briefed on pending legislation and arguing his position with members across the aisle. He pokes his head out of his office and looks left, then right. The coast is clear. He scurries down the marble hall to catch the back elevator to the parking garage, turns a corner and freezes in his tracks....

It’s too late to turn and run, so he gulps, puts on his best political face, smiles and says, “Hi, Ledy.” He’s been caught. Ledy smiles and says, “Hi, senator. I’ve left some messages but thought it would be easier to just catch you while I’m in town and fill you in on this important piece of legislation for people’s pets. Oh, and I have something for you…. Here’s a button for you to wear with a picture of my pit bull, Karma, on it.”

Ledy is one of a kind. She’s more than a relentless stalker of legislators; she’s hysterically funny, wicked smart, and a friend to every pit bull and feral cat on the planet. Truth be told, Ledy was “goin’ rogue” before Sarah Palin was playing B-ball at Wasilla High.

The problem with writing about Ledy is deciding where to start and where to finish.

Her résumé is right out of Who’s Who for Animals:

Ledy has drafted and spearheaded the passage of 28 humane bills, including the legendary and groundbreaking Anna’s Law in Illinois,  which helps economically disadvantaged people have access to spay/neuter services. The law created the Pet Population Control Fund, which subsidizes spay/neuter and vaccinations for individuals receiving food stamps, those receiving Social Security disability benefits, and caretakers of feral cat colonies. Recipients only need to pay $15 for the service and the state fund covers the rest.

Ledy’s accomplishments also include helping to pass bills that prohibit breed-discriminatory legislation in the state of Illinois, prohibit convicted felons from owning unsterilized dogs, and mandate psychological counseling for animal hoarders who are found guilty of violating the Humane Care for Animals Act.

In 1985 she organized the Madison County Coalition Against Pound Seizure, successfully stopping the sale of animals for research from her county animal control facility. She then founded the Madison County Humane Society and served as its president for eight years. In 1992 she co-founded the Illinois Federation of Humane Societies and served on its board for 10 years. She was a co-founder of Operation SPOT (Stop Pet Overpopulation Today) in the St. Louis metropolitan area and served as a board member for eight years.

She also spearheaded the creation of the Best Friends fiscal impact calculators for breed discrimination and feral cats. She is the current chair-elect of the American Bar Association TIPS animal law committee and her latest work on police procedures in cases involving dogs is recommended reading by the U.S. Justice Department. Phew!

True to her heartland roots, though, Ledy is regular folk. At the end of the day, while telling stories infused with her infectious laugh (some would say cackle), Ledy holds her own with the crowd over a glass of Jack and Diet Coke.

Visit American Dog magazine and vote for Ledy as Animal Welfare Lobbyist of the Year. She’s the real deal. And while you’re there, cast a vote for Best Friends Animal Society, too. You can also check out Ledy's blog for the latest on companion animal legal issues and ways you can help!