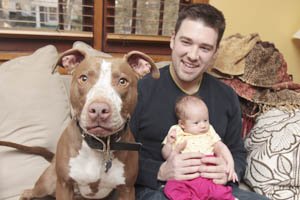 Last week, I wrote a blog about a video game for the Android phone market that takes players through the selection, care, training and fighting of virtual dogs. “Raise your dog to beat the best” is the lead promo line for this app from Kage Games, LLC.

Best Friends, along with every national animal organization, called for the game’s removal from the Google-owned Android Market, and thousands of concerned animal lovers logged on to the Android Market site to request the removal of this app from their virtual shelves.

The “Dog Wars” app was taken down, but not in response to objections from the public. It was apparently removed due to a copyright infringement and is now back under a new name, “KG Dogfighting.”

One has to wonder at the extent of the disconnect between the creators of this game and the reality of the animal suffering they are glorifying. Are they clueless, cloistered naïfs, or do they know exactly what they are promoting? In the final analysis, it doesn’t really matter. The fact is that Kage Games, LLC has produced a video game that is essentially a “how to” guide for animal cruelty.

A glimpse into their mindset is revealing.

The Kage Games info page for the app states that “you must be 13 years of age to play,” and then follows that with a string of self-justifications capped by this inane, threadbare comment:

We DO NOT CONDONE violence towards animals or humans, and we are confident in humankind’s ability to distinguish between a rudimentary game and the consequences of real life.

So, while the folks at Kage Games, LLC have confidence in a 13-year-old’s grasp of the consequences of real life, most people who are not out to make a buck off of children or to cater to gangsta wannabes have greater concerns regarding the malleability of adolescent minds.

Quite frankly, the game is heinous and irresponsible. ‘Dog Wars’ simulates the illegal act of dog fighting, which is a felony offense in all 50 states. The game teaches users how to breed, train, fight, medicate and kill virtual dogs. The entire concept is repulsive and sickening, and it is absolutely the wrong message to send to our children. Particularly disturbing to police officers across the nation is the fact that the game’s website notes the player has a ‘gun for police raids and can inject the dog with steroids.’ At a time when there is increasing violence against police officers across our nation, this is completely inappropriate and offensive.

We urge you to ban this game from all your products and website. You are responsible for the content on the marketplace; do the right thing and remove this game permanently.

Weber could have expanded on his organization’s objection to “KG Dogfighting” at the law-enforcement level by citing the correlation between dog fighting and gang activity in every city in the country. He could have also pointed to the fact that animal cruelty is a precursor to violent, anti-social behavior, including spousal and child abuse. 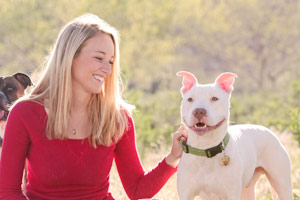 Animal lovers everywhere should understand that dog fighting at every level, from high-stakes interstate rings to back-alley street-level fights, is a cause of daily suffering and death for dogs. It also drives the over-breeding of pit-bull-terrier-type dogs by backyard breeders that results in a disproportionately high number of pit-bull terriers entering and dying in America’s shelters.

Google/Android is apparently unconvinced or unconcerned despite the fact that Android Marketplace rules and regulations state, “Android Market should not be used for unlawful purposes or for promotion of dangerous and illegal activities.” They would likely lean on claims of freedom of speech, cite inconclusive studies about the effects of video games on behavior, and continue to excuse a violation of their own stated policy until enough people walk away from their products and services.

Then sign Change.org’s “Tell Android to Block Dog Fighting App” petition to have the app removed.

Please pass this along to your friends and ask them to do the same.