Think different: Here's to the crazy ones

This weekend at the No More Homeless Pets Conference, over 1,500 animal lovers will gather to learn how they can save more lives and learn from the people who have created no-kill communities. Below is the closing address I gave in 2009 in which I reference the kind of crazy, out-of-the-box thinking that has powered our no-kill movement. I refer to the following video in the address.

"More than ever, we need to work smarter, share resources, recruit and empower more volunteers, and activate the millions of animal lovers out there who are ready to be recruited to the cause. We can’t just keep doing the same old, same old and expect different results. We need to use every tool at our disposal, and we need to leverage new technologies to communicate with new audiences and to mainstream the cause of No More Homeless Pets. It’s a challenge that calls to mind the challenge that faced the pioneers of the no-kill movement.

"This is the 25th anniversary of Best Friends Animal Society. In 1984, when the founders broke ground for what was to become the flagship for the no-kill movement, close to 20 million animals were being killed in our nation’s shelters each year. Best Friends championed local, grassroots action as a cure for what ailed the cause as opposed to the top-down “leave it to the experts” approach advocated by the traditional animal welfare organizations.

"That change constituted a paradigm shift of epic proportions. A paradigm shift, by the way, is defined as a change from one way of thinking to another. It's a revolution, a transformation. And that kind of change doesn’t just happen on its own, but rather agents of change drive it. There is no doubt that all of us, the grassroots activists, are the agents of change who have not only changed the course of animal welfare, we have also changed the policies and opinions of the old-line organizations, most of which have entirely reorganized their activities and public posture to align with the no-kill philosophy that people like Rich Avanzino, Mike Arms and the founders of Best Friends were advocating 25 years ago.

"This is our work. The only question is how do we go about it? We know what we have been doing works, but we have to do more ... more of what we know works using more new ways, different ways. We need to think. We need to think different. 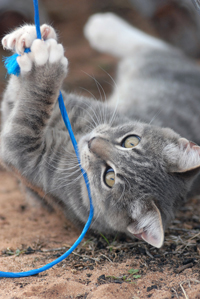 "Think different like crazy Rick DuCharme, founder of First Coast No More Homeless Pets in Jacksonville, Florida, did when he saw all those Jacksonville community cats dying in the city shelter. He had the crazy idea that these kitties didn’t belong in the shelter to begin with, so he worked out a plan with the city of Jacksonville to bypass the shelter system altogether by fixing and then releasing cats to live out their lives in the community from which they came.

"Community cats are now part of the fabric of the community. This is one of those “duh” moments. It shakes out as an easy-breezy alternative to killing cats. So simple and obvious … voilà! Not feral cats, not wild cats, community cats! All of this with total endorsement and money from the city of Jacksonville.

"Think different like crazy Bonney Brown, director of Nevada Humane Society. She walked into an organization mired in controversy and turned the organization around with an adoption guarantee for pets transferred from Washoe County Animal Control. Innovative adoption promotions and an “all hands on deck” approach made saving lives job number one for all the staff and volunteers.

"Think different like crazy Becky Robinson of Alley Cat Allies who created a national advocacy organization for feral cats that virtually defined and institutionalized trap/neuter/return (TNR) as the only humane management practice for community cats.

"Think different — I want to see you challenge conventional wisdom in every aspect of animal welfare. Saving lives is too important a task to not ask questions, to not test new approaches. It’s too important to not think different. They may call you crazy. They may try to marginalize you. They may try to ridicule you, but just remember, in the indelible wisdom of Ghandi: 'First they ignore you, then they ridicule you, then they fight you, then you win.'

"I want to share something with you because I think it’s brilliant and it was created by an independent rescuer, Yvonne Smith, who also happens to be a member of Best Friends. Just coincidentally she is also an amazing advertising executive. This is one of her ads for Apple. (See video above.)

"My friends, I can’t think of a better description of everyone gathered here today. So tell me — who is crazy enough to think we can change the world for the animals? Let me hear you. Can we change the world?" 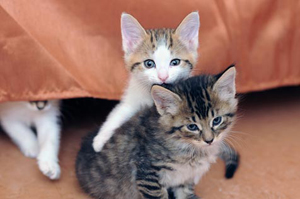 Best Friends was started in 1984 by a group of freethinking animal lovers who had been doing rescue work independently and collectively for the previous 10 years. They challenged the old guard national animal organizations with the simple philosophy that killing animals was no longer a necessary evil … it was just plain evil.

This iconoclastic attitude and approach is special to me and to all of us at Best Friends, including our volunteers and members. And I believe it’s one we share with another brand that’s dear to my heart: Apple.

In 1984, as the founders of Best Friends began creatively challenging the status quo, Apple launched its Macintosh computer with the legendary commercial featuring a young woman in red and white track gear, carrying a sledge hammer and charging into an auditorium filled with drably dressed worker drones who were watching a huge video screen filled with the grim visage of a Big Brother character intoning a mantra of corporate oppression. The woman whirls and flings the hammer into the screen, smashing it and the spell cast by the Big Brother character into smithereens. The Macintosh had arrived and the corporate giants were on notice. 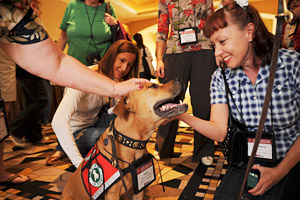 As it turned out, one of the advertising geniuses responsible for the creative development of that ad and Apple’s public image was an independent rescuer and soon-to-become enthusiastic supporter of Best Friends named Yvonne Smith.

Our friend Yvonne (and an amazing team at TBWA\Chiat\Day) developed another iconic advertising campaign for Apple with the tagline “Think Different” (see video above). The campaign extended over several years and raised the bar with another world-class TV commercial known as “The Crazy Ones,” featuring film clips of the likes of Albert Einstein, Richard Branson, Bob Dylan, Picasso, Amelia Earhart, Martin Luther King Jr. and Gandhi.

Thinking different, of course, was and has been the lifeblood of the no-kill movement.