Vicktory dog Curly passes away at age 13, less than two months after his best friend, Mya

2019 has been a tough year for the Vicktory dogs and for all of us who love them. None of the 22 Michael Vick dogs — who will forever be known as the Vicktory dogs — were puppies when they came to Best Friends Animal Sanctuary. Now that more than 11 years have passed, most of them have succumbed to age or health issues. Each loss is heartbreaking to everyone who knew the dogs personally at the Sanctuary, to their families and to the thousands of people who felt like they knew them through social media.

Since the day they arrived at the Sanctuary in January 2008, the dogs have traveled an incredible road of hope and healing. Their impact on the world has been immeasurable. Prior to the work done with the Vicktory dogs, it was standard practice for all dogs rescued from fighting rings to be deemed inherently dangerous, with no chance to demonstrate otherwise, and they were simply killed. Curly and the rest of the Vicktory dogs proved to the world that that was not the case — that dogs rescued from fighting rings can and do go on to live meaningful and beautiful lives. They were heroes, and thousands of dogs from similar circumstances or with similar looks owe their lives and their happy homes to Curly and his friends.

The dogs have had an incredible impact on people, too. They became central members of loving families and connection points for friendships among people who were once strangers. The Vicktory dogs who called the Sanctuary their forever home became such an integral part of life here that it’s hard to grasp the fact that they are really gone. The past few months have been particularly difficult. On June 22, Layla passed away. Mel was not far behind; he left the world on August 13. Mya passed away on August 31 after a brief battle with cancer. Now, we mourn the loss of Mya’s best friend and constant companion, Curly. 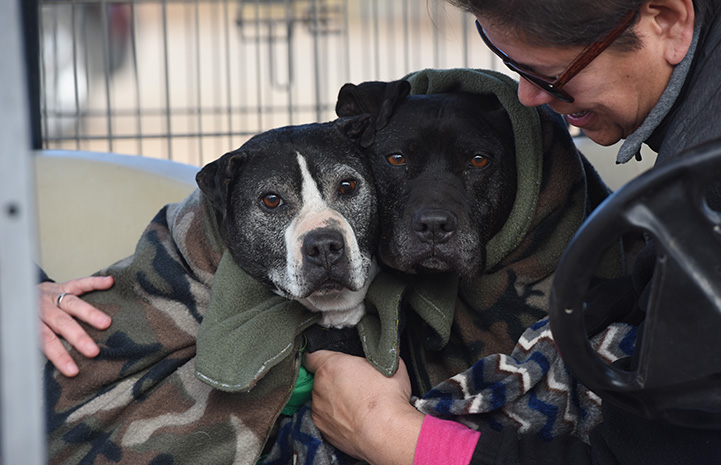 Why the Sanctuary was Curly’s one true home 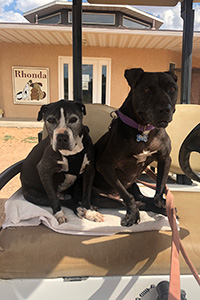 Unlike Meryl, who is now the last remaining Vicktory dog at the Sanctuary, Curly wasn’t ordered by the courts to remain at Best Friends. The Sanctuary became his permanent home because shyness and lingering fears kept him from successfully completing the Canine Good Citizen (CGC) test legally required for all Vicktory dogs to be eligible for adoption. Over the years, it became increasingly clear that taking the test was too stressful for him, so Dogtown caregivers and behavior consultants decided not to have him keep trying it. Besides, by then the Sanctuary had become Curly’s one true home.

It was the same for Mya, who was Curly’s best dog friend. The two lived together and were inseparable. In fact, it was (and still is) hard for people at the Sanctuary to think about Curly without Mya. Wherever one went, the other followed. That was true for the golf cart rides that became one of Curly’s favorite things in the world, Mya’s hydrotherapy sessions, veterinary appointments and all their visits to Sanctuary offices.

Memories from Curly’s family and friends

On most mornings, Mya and Curly would be chauffeured via golf cart from their room in Dogtown to the Dogtown managers’ office. For the past two years, they’ve also spent two or three days a week in the office of Michelle Weaver, Best Friends’ director of animal care and interim Dogtown manager. Michelle was the manager of Dogtown when the Vicktory dogs arrived at the Sanctuary. Here, Michelle shares her thoughts and memories of Curly:

“The staff who knew Curly best gave him the nickname Naughty. For us, it was a term of endearment and we loved that mischievous side of him. His personality was so big that it is hard to describe. He loved his toys and whatever we put them in, including cardboard boxes that he would tear to bits for fun.

“He didn't completely understand boundaries. For instance, if he wanted to look out the window and access to the window happened to be your desk, well, so be it. On more than a few occasions, the phone happened to be in his way and later we would find out that he had dialed someone's extension while looking out the window. It is surprising that he didn't order pizza for us!

“Curly liked to walk on familiar trails and go for car rides or golf cart rides. He loved his companion Mya with all his heart and soul. Losing Mya was heartbreaking for Curly. While a physical exam did show he had lymphoma, we can't help but think this little guy's broken heart made the disease progress faster.

“Considering where these dogs came from, that this quirky, frightened little dog could learn to love and trust another dog and people was remarkable. We have a Curly-shaped hole in our hearts. But we know he and Mya are back together again, enjoying each other's company the way they did here and being as naughty as can be.”

Other friends have similar things to say about Curly. Michelle “Shell” Palismo, Best Friends’ national programs executive assistant, who used to work in Dogtown, says, “Curly really did test a person's patience when he was at his naughtiest, but I also loved that about him and would try and not laugh when he was doing it. I remember one day I was leaving the office to go and get his and Mya’s lunches ready, and I told him, ‘Do not get into the trash.’ When I came back, he was standing on the trash can. At least he listened to me, right? He also had a sweet side to him. If you were one of his people, sitting or lying on the floor would get him to come over and lie with you or sit in your lap. All the while, his tail would be wagging.” 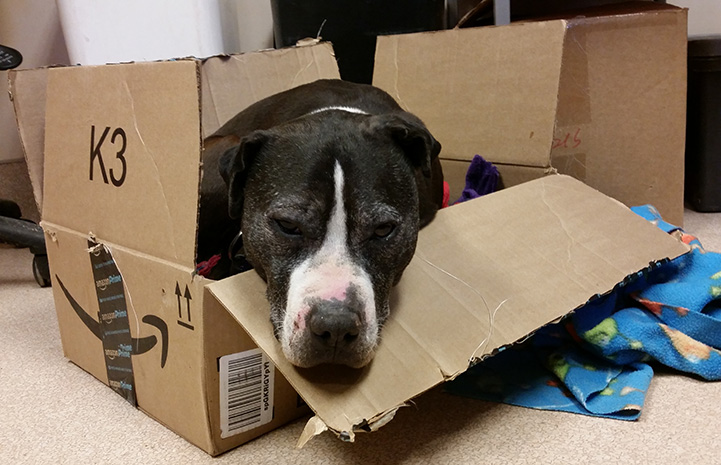 As sad as they are that he’s gone, Curly’s caregivers can’t help but laugh when remembering his antics. “He was motivated to do what he wanted to do,” says Dogtown caregiver Ramsey Schatz. “He loved lying outside in the sun, no matter how hot it was. On days when it was too hot to walk dogs on the trails, he’d be outside in his yard, panting, with his legs stretched out like Superman. We would have to make him go inside and block him in, because otherwise he wouldn’t go inside to cool off or get water.” 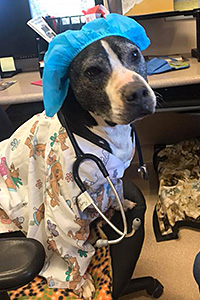 Ramsey and Dogtown caregiver Christina Morris also laugh when they recall Curly’s silly habit of flipping over his water bowl and his Kuranda bed when he got excited or impatient. “Right up until the end, he was determined to remind us that he could still do these things,” Christina says.

Regarding hydrotherapy, Curly refused to get into the tank himself, but he would supervise all of Mya’s sessions. Afterward, however, he was eager to get back to his room and didn’t like waiting for Mya, who was tired. “My arms would be stretched out in opposite directions,” Ramsey says, “since Curly would be walking ahead while Mya lagged behind.”

He liked to bark to alert his caregivers that Sanctuary tours were on the way. When caregivers would do dog introductions in the yard next to Curly’s, he enjoyed acting tough and strutting up to the fence line while sounding his old man’s raspy bark, as if to say, “Yeah, I’ve still got it.” “But he was sweet at heart,” says Christina. “At the end of a stressful day, I could go sit with Curly in his room, and he would rest on me and give me kisses.”

Curly’s Sanctuary friends rallied around him after Mya’s passing. They knew that his health was fragile, and that what he wanted most was to be with his best friend again. Whatever physical ailment finally overcame Curly, we are thankful that he no longer has to endure a broken heart. Run free, Curly, and please give our love to Mya. 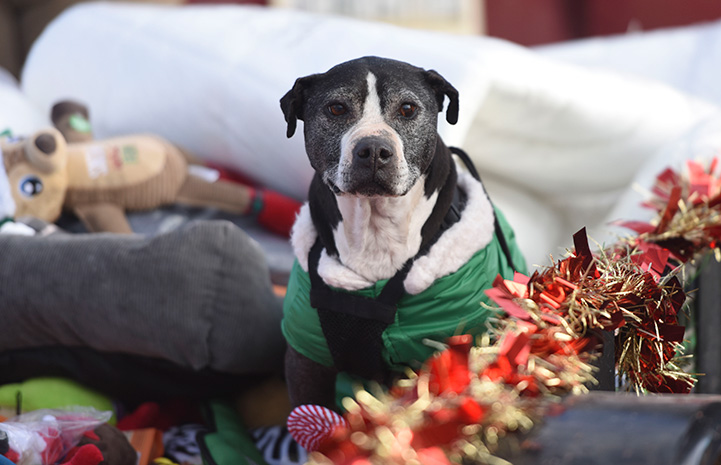