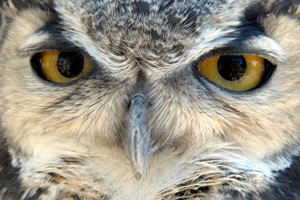 Wildlife education is still a relatively new field.  It has been part of the Wild Friends department since the mid-'90s when we got our first educational bird.  What does educational wildlife really mean, you might ask?  Well, this is a slightly longer answer than you might expect.

Wildlife education is a state- and federally licensed field created for the purposes of more effectively teaching people about wildlife conservation.  Wild animals are individually listed on our permits, and each individual animal must do a minimum of 12 outreach programs a year with a mandated wildlife conservation message.  The animals in these programs no longer have the ability to survive in nature;  often they have physical limitations. 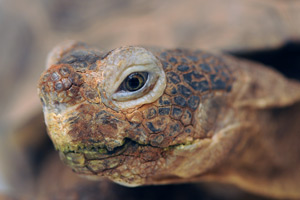 Norbert, our desert tortoise.  Norbert helped us teach people about desert tortoises and their plight as a federally designated threatened species.  Norbert also helped us drive home the message that when you take an animal in, you need to provide well for that animal.  Norbert came into our program for only a couple of months before he lost his battle with kidney failure, a disease that would have been easily prevented with proper diet.  There is a facility in Las Vegas called the Desert Tortoise Conservation Center that is home to about 1,000 desert tortoises - they provided a lot of expert advice that helped Norbert – and they are working hard to help tortoises throughout their native habitat.

Since coming to Wild Friends, Suvali has been teaching 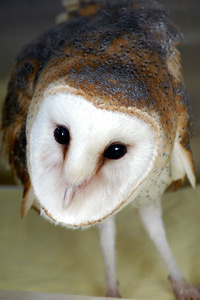 visitors about barn owls and their slow recovery in the U.S. after widespread rodent poison use in the agricultural industry almost destroyed their populations.  Barn owls are no longer in decline, and the populations are doing much better now that people are realizing through outreach and education programs that barn owls, which are a native species, naturally control rodent populations.  If you restore a barn owl habitat (by putting up nest boxes, for example), you can eliminate pests without putting toxic substances into the environment.

Elfin, who I have to admit is just too cute for words, is a white-tailed antelope squirrel who has been with us since 2001 when he was orphaned as a baby.  The kind people who found him fed him the wrong milk replacer.   Elfin is now slightly neurologically impaired and cannot survive in nature.  He lacks coordination and has no concept that predators exist.  Elfin has spent the last 10 years with us helping educate people about the importance of bringing injured and orphaned wild animals to licensed wildlife rehabilitators as soon as they find them.  People may have the best of intentions, but without the right training, they are often doing harm to the animals they are trying to save!

Hilltop (pictured above)  is a great horned owl who has been with us since 1997.  He has watched our program slowly grow.  From 1997 to 2003, Hilltop saw an average of four people every day.  Now he teaches more than 17 people every day!  He has been a great ambassador, teaching tens of thousands of people over the years all about wildlife.

Hilltop, Elfin, Suvali and all of our educational wild animals meet new people 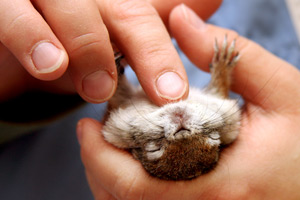 every day as our staff-guided tours introduce visitors to the Wild Friends department.  In addition to their individual stories, they help instill a reverence for wildlife and nature in everyone they meet.  It is one thing to see a bird in a tree or flying over your head.  It is something else entirely to see that same bird from close enough to observe the detail in his or her feathers.  Or to get a chance to chat with Edgar the raven – one of our newest residents – who can be quite shy at first.  But after the tour goes past him, and he spies on all the people walking around, he usually comes over and chats with people on their way back up the hill.

Hopefully, the next time you are in Southern Utah, you will stop by and meet the many amazing animals who are eager to teach you all about themselves, their species and what you can do to help! (For information on visiting Best Friends, click here.)

Categories:
Outreach and Embed Programs Wildlife and Other